Forty years ago, on the Monday the 17th of August 1964, Liverpool played their first European game. The great European history of Liverpool started on the Laugardalsvöllur in Reykjavik the capital of Iceland. The opponents were the Icelandic champions K.R. Knattspyrnufélag Reykjavíkur. 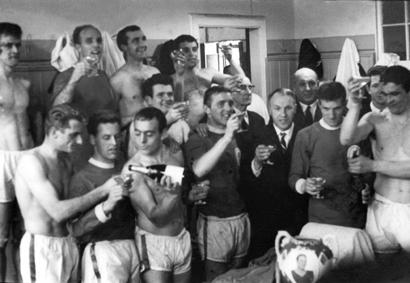 Liverpool had played West Ham United at Anfield for the Charity Shield on the Saturday the 15th of August. The teams drew 2-2 and shared the Shield. Gordon Wallace & Gerry Byrne scored Liverpool´s goals. Wallace got his chance in the side because Ian St. John was recovering from appendicitis. The day after the Charity Shield the team took off to Iceland.

It is worth noting that Liverpool were due to play in Iceland only two days after playing West Ham. Talking about a heavy fixture program of the modern game! The voyage to Iceland was not all straight forward. The captain Ron Yeats remembered the trip well. "It´s amazing how things have changed over the years, especially when you look back at that first European trip to Iceland. Most of us didn´t know where Reykjavik was. It was a terrible journey and we got there by the most astonishing circuitous route. We flew from Speke to London, then from London to Prestwick in Scotland and finally caught a flight from there to Iceland." (As told in the book "Liverpool in Europe" page 7 by Stephen F. Kelly. Published by CollinsWillow in 1992.) On the way to Iceland the plane flew over a volcanic eruption in the middle of the sea. The Liverpool party could view the island Surtsey in the making. In the end Bill Shankly and all made in safe and sound to Iceland.

The players of Liverpool and K.R. took the field at the national stadium of Iceland in the late afternoon arctic summersun. Natural floodlights if there ever was! The wind was light. Blowing from the north west. It was a nice night but it turned a bit chilly when the sun stopped went down as the game went into the evening. The game was big news in Iceland as well as Liverpool and 10,268 people turned up at Laugardalsvöllur. I gather that was a record for the stadium at the time. Liverpool played in red shirts and white shorts. The all red kit was not introduced until later that season. K.R. wore black and white striped shirts and black shorts like Newcastle United.

Liverpool couldn´t have started their European adventure any better. In the 3rd minute Liverpool scored. The young Scot Gordon Wallace scored from just outside the six yard box after good work from Roger Hunt. The goal was timed at 180 sec. Gordon later recalled this historic goal. "I remember Roger Hunt going to the byline and squaring it back to me. I was only six yards out and to be honest I mishit it. The ball went in between the goalkeeper and the near post. It was the club´s first time in Europe and everything was new to us." (Liverpool matchday magazine 26.09.2001.) By defending for their lives K.R. kept the score at 1-0 after 45 minutes.

The wind turned a bit during half time and kept its intention to blow to the backs of the home side! But though the wind turned to help the home side it was to prove a little help for K.R. The first half was a one way traffic and the second half proved to be even more more difficult for the Icelandic amateurs. In the 46th Liverpool scored again. The England striker Roger Hunt scored from the edge of the six yard box after good work from Gordon Wallace. Five Icelandic defenders couldn't stop this great goalscorer. The best chance that the Icelandic team got came with the score at 2-0. Ellert Schram´s header got past Tommy Lawrence but Ronnie Moran was on hand to clear on the goal line. Shortly after this, in the 57th minute, Phil Chisnall scored Liverpool´s third after good work from Ian Callaghan. Phil got a rare chance in the side because Alf Arrowsmith had been injured in the Charity Shield game. Three minutes later Gordon Wallace scored his second goal. The Scot headed the ball home from close range after a good cross from Ian Callaghan. Two minutes before the end of the game the fifth goal came. Roger Hunt then scored his second of the night with a powerful shoot from more that 20 yards. The goal of the game in the opinion of the Icelandic press reporters.

I have reports from the game from two Icelandic papers Morgunbladid (The Morningpaper) and Timinn (The Times). The papers had lenghty reports and pictures from the game. Both papers agreed that Liverpool had totally outclassed K.R. For example Tommy Lawrence only touched the ball three or four times during the first half. On all occacions he got the ball from back passes from his own players! The players of K.R., who like Liverpool´s players were playing their first game in Europe, were criticized in the newspapers for defending with the only aim of trying to lose by as few goals as possible.

The reporter from Morgunbladid said Liverpool could have won 15-0! This was his final assessment. "It is not possible to compare these two sides. Liverpool were so much better. They could do what they wanted to. But they did not try too hard to score goals. Many of their players made good effords to entertain the crowd. But nobody did more in that way than the winger Thompson with his clever and various solo tricks. The Icelandic crowd and the players of K.R watched like good students at a school." This was the first but certainly not the last time Liverpool handed an European opposition a lesson in football.

Although a Man of the match was probably not chosen everyone thought the wonder winger Peter Thompson was the best player on show. One of the players from K.R. told me that Peter was unstoppable at times that night. But one thing was for sure. Liverpool had got many Icelandic supporters that August night!