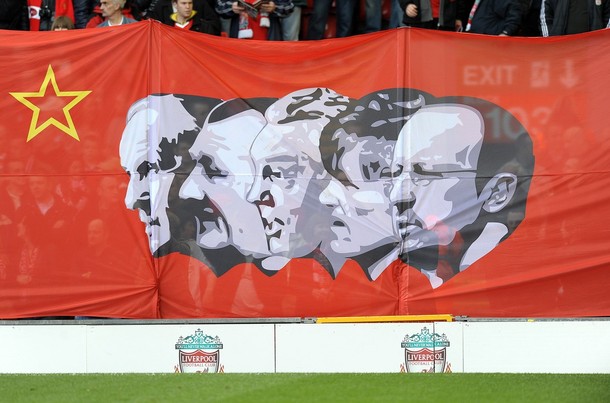 "At a football club, there's a holy trinity - the players, the manager and the supporters." - Bill Shankly

I've been watching Liverpool since the early 70s. I stood on the Kop and watched the end of the Shankly era and the beginning of the Paisley era. I watched the best team in the world defeat all before them. This was the time when, to paraphrase Shankly, the bond between fan, team and manager was strongest. I grew up giving the manager my full support and I was richly rewarded. Support for the Liverpool manager is in my DNA. At least it was until Roy Hodgson. I was uneasy with that appointment and I was carrying a metaphorical pitch-fork by the end. I'm saddened that Brendan Rodgers has been sacked. He is a talented manager who gave his all to the cause.

Let me put my cards on the table. Kenny Dalglish is my hero. And I still love Rafa who was working with both hands tied behind his back in his last season, dealing first hand with the Epic Swindle. Of course I would have given Dalglish more time as manager. Sacking Kenny would have been like cutting off my own arm.

The Liverpool manager's job is arguably the most difficult in the football world and comes with a serious health warning. The manager must face many challenges: the hopes and expectations of the fans who have seen the best team in the world; the long shadow of the great managers and teams; and all this with finances that predict a 5th place finish.

Rodgers also faced the shadow of his own great team from 2013-14 that so nearly ended the long wait. The Liverpool manager's job is a draining experience. There comes a point when enough is enough, when the manager and fans need to move on. I'd argued that he deserved at least 10 games. But I accept that the time may now be right for Rodgers to leave, with the ghost of last season's implosion refusing to go away. As Rodgers stated after the Everton game, the post-Suarez 'rebuild' was still in progress. The rebuild was stuttering forwards, with Rodgers once again seeking the magic formula that would transform his team. In truth the appetite for another Rodgers-led rebuild was diminishing, particularly when there are strong managerial candidates waiting in the wings.

In 2013-2014 Brendan Rodgers came very close to realising every fan's dream of winning the league title. It was a fantastic season, characterised by exciting attacking football. To put this in context, see my article From Rafa to Rodgers, written a few days after the Stoke debacle.

Below you can see the key premier league stats for Rodgers and the last three managers before him. 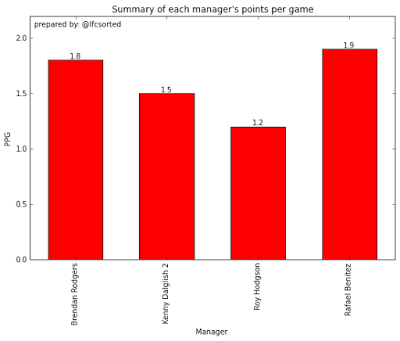