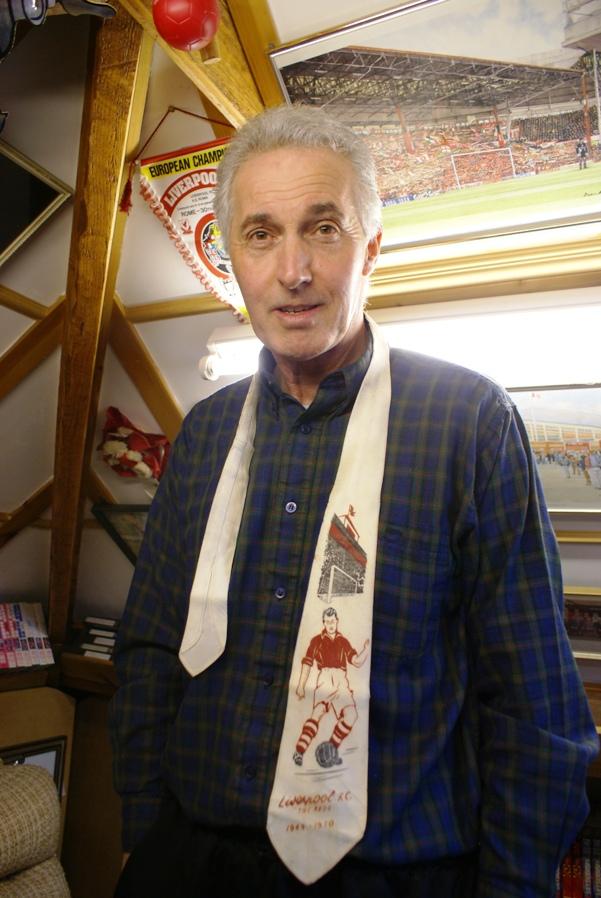 Adrian Killen is a Liverpool Football club memorabilia collector par excellance and has a great wealth of knowledge about the club. He works as an Anfield tour guide, but his home is a Liverpool FC museum in its own right.

When the museum opened in 1997 I made myself known to the curator Stephen Done, because I had a lot of spare material and I had given him a lot of tickets, spare newspapers and souvenir papers. I used to pop in there after finishing an early shift at the printer's and got access to a lot of stuff. As time went by I got to know Steve a lot better and when I was made redundant at 59 and unable to get back in the trade, even with 42 years experience, it was time to move on. I was working at the museum two days a week voluntarily and when it got very busy at the time of Istanbul they needed more staff and they asked me to go over and I've been there ever since. 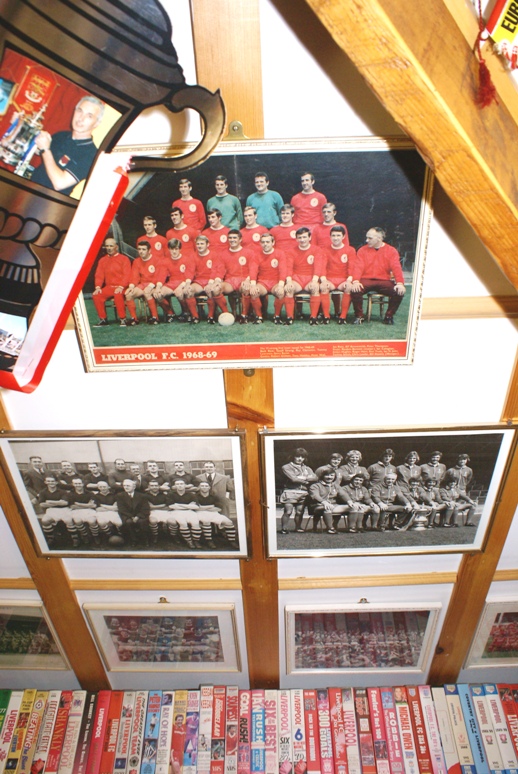 What are your earliest moments of Liverpool?

I was taken to the 1950 FA Cup semi-final against Everton, but I was left at a relative's house in Manchester while my family went to the match. Coming back, I remember seeing a big tin drum in a shop window and my mother bought me the tin drum. When I came back from the train I remember marching down the station with the tin drum. I was only four years of age. All the men behind me doing a dance because we had beaten Everton in the semi-final.

I went to the final. My grandmother's brother was a shareholder in the club and he managed to get a 21 shilling ticket. We were sat not far from the royal box and I sat on my grandmother's knee with a small rattle. This was my very first game. I don't remember anything about the game, but I remember the occasion, sitting on her knee and looking at these players. It was a horrible day and pouring down with rain. I remember my mother crying at the end of the game and I couldn't understand why she was in tears. 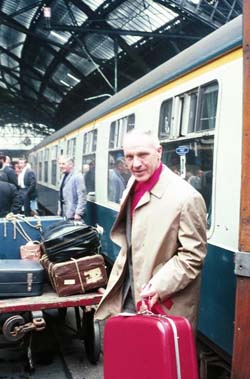 Adrian and his brother took a number of photos
when Liverpool were leaving Lime street station to play Arsenal in the 1971 FA Cup final.

Even though Adrian has always been a Red, he used to watch the Blues just as often...

I used to go to watch Everton when we were playing away as it was only 10 to 15 pence to go to a game in the 50s and 60s. I used to go to Goodison one week and Anfield the next. I started to go with my Everton mates to watch Everton because I couldn't afford to travel away as I was not of a working age. It was only a 15 minutes walk to the ground where I lived in Liverpool. I've seen more games at Everton more than a lot of Everton supporters have.

His first game at the Kop was a historic game to say the least.

The first time I stood on the Kop I was a 13-year-old in 1959. It was actually the day Shankly was at Anfield for his first game. We played Cardiff City and we lost 4-0.

I've missed four home games since 1959. I missed one the day I got married. I had to take a chance whether we were at home or away that day and it turned out we were at home against Nottingham Forest. We drove right past the ground at quarter to three in the wedding car. I was very tempted to get out, but I was warned not to.

The other games... I used to do shift work and I was very lucky in changing my shift but this particular one we played Manchester City in 1974 just before the cup final. We beat them 4-0. I just couldn't get a change of shifts. In 1966 Liverpool played Burnley in a night game the day I was taking my driving test. The last time was two years ago against Newcastle when I had a blod clot on my lung. I rushed myself to hospital. I gave my season ticket to a friend, but they let me out an hour before the game. I had no season ticket so I had to go watch it on the television. 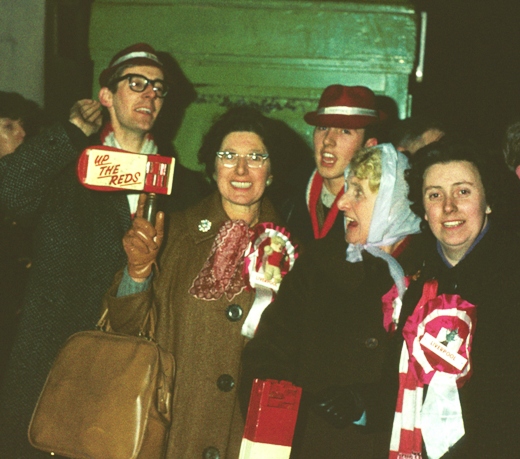 Eddie Leeson, mom Jean, Adrian, grandmother Cissy and sister-in-law Gwen
celebrating Liverpool's win over Arsenal in the 5th round of the FA Cup in March 1963

Adrian's family has always had connections to Liverpool FC

My grandfather was an Evertonian, but my dad, Walter Killen, was an agent for Liverpool and was at the club every day. My dad was born in 1908 and watched the reds during the First World War period and became a regular in time to see the great championship sides of 1921-22 and 1922-23, the players whose names he could recite like poetry. It was only two pence to go a match, two old pennies. In those days a farthing was a quarter of a penny. He used to stand outside and say: 'Can you give me a farthing so I can get to the match?' He tried to build up two pence. Failing that, whenever people were going to the turnstiles he'd crawl through people's legs to get in for nothing. He said: "If I had a penny for every time the sergeant smacked me over the backside with his baton, I'd have a few bob."

He only lived across the road, in Venice street, right opposite the Kop. He went to Venice street school which is still there. He told me that before the Kop roof was built, if Liverpool had a Wednesday afternoon game they'd still be playing by the time school finished so there used to be an almighty fight to get to the top class room, because you could see down to the ground from the school windows in those days. He used to see some of the games from up there.

"If I had a penny for every time the sergeant smacked me over the backside
with his baton, I'd have a few bob." 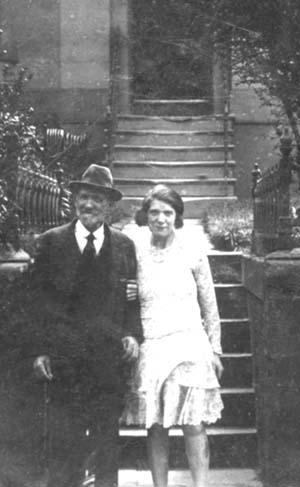 Adrian's grandmother, Cissy, with Dr. Davies outside his surgery in Spellow Lane 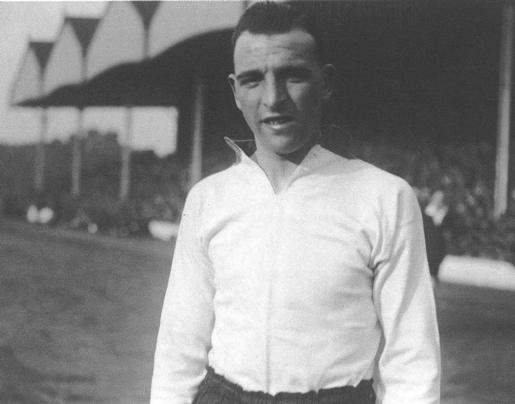 My dad used to start going regularly to games in 1922-23. He died at the start of the 1988-89 season. My mother and grandmother lived in rented rooms above Dr. Davies surgery in Spellow Lane which were huge houses but are no longer there. Doctor Davies used to treat the Liverpool and Everton players during the 30s. My mother and my grandmother got to know Matt Busby very well as well as Nivvy [Berry Nieuwenhuys], Alf Hanson and Cyril Done.

I remember the Munich disaster in 1958, when my mother and grandmother were in tears when I came home from school. 'Manchester United crashed in Munich', they said 'and we think Matt Busby is dead.' They were very good friends of Matt Busby and were very upset.

Alf Hanson (pictured) came up to my mum one day and said: 'I would like to take you out on Saturday'. She said: 'I'm awfully sorry, Alf, but I'm getting married on Saturday.' That was it. I always used to wind my dad up by saying to my mum: 'Mum, why didn't you marry Alf Hanson? I could have had a Liverpool player as my dad,' which didn't go down very well with my dad.