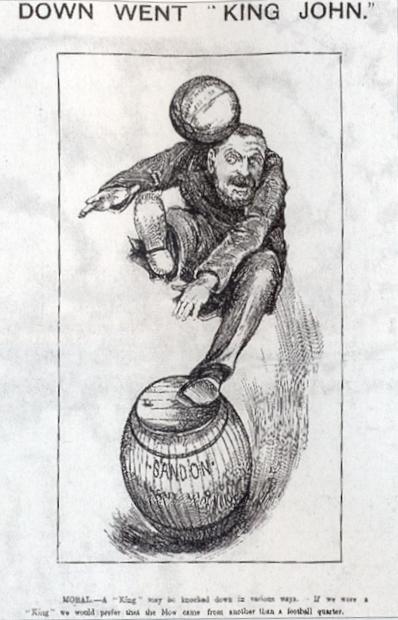 A cartoon in Liverpool Review in 1892 highlighted King John's fall from grace at Everton.

The text beneath the picture Moral - A "King" may be knocked down in various ways.
If we were a "King" we would prefer the blow came from another than a football quarter.

A general meeting was announced by Everton FC for 15th of March. Everton FC also announced an agreement of Houlding's request a copy of the prospectus of his new company, Everton Football Club and Athletic Grounds Company, Limited was to be sent to each member along with the notice convening the meeting.

Houlding and Everton finally parted ways at Everton's general meeting. Requisition 1-1 stated the following: "That Messrs John Houlding, Alexander Nisbet and Thomas C. Howarth having lost the confidence of the members of the club, be respectively removed from the presidency and the committee."

Everton FC also had to address Houlding's attempted takeover of the club announced in his prospectus from 26th of January which is here quoted: "The Company propose that in the event of Everton Football Club agreeing to amalgamate with the company, on or before the 15th of March 1892, each of the said club at the date of such amalgamation (in the whole not exceeding 500 members) shall be entitled upon application to have allotted to him one fully share in the company free of charge."

Chairman George Mahon occupied the president’s chair at the meeting, but: "As the proceedings were about to begin, Mr John Houlding, the president, entered the room and was vociferously cheered by a section of the members. The Chairman, seeing that their president was present, he himself ought to occupy the position of an ordinary and to ask him to take the chair.
Houlding. – "I cannot hear."
The Chairman. – "I have asked you, as president of the club, to take the chair (cheers)."
Houlding. – "I am here on trial, and a criminal never takes the chair, he stops in the dock [A voice cries out: ‘Best place for him!’]"
The Chairman remarked seeing Houlding had declined to take the chair, it was his duty to fill that position (cheers)."

Mahon said he was aghast to discover that two members of Everton FC's committee, Ramsey and Nisbet had been party to founding Houlding's new company. He also stated that the League had ruled in Everton FC's favour and forbid Houlding to use the word Everton in his new company's title "which practically knocked the new company on the head (loud applause)."

Regarding the Mahon ridiculed Houlding's promise that each member "shall be entitled upon application to have allotted to him one fully share in the company free of charge." He said that the members "should be entitled to at least seven or eight shares (Hear, hear and applause)."

Clayton rose (amid loud applause) to propose requisition 1-1 that Houlding, Nisbet and Howarth should be shown the door. He said that he did not propose this "from spite and spleen" (Oh, oh and applause). It was simply "a matter of business". Houlding was not "worthy of holding the position of president of this club" (Loud applause and hooting).

Martin was appalled and claimed there would be no Everton Football Club had it not been for Houlding (applause). Nisbet said he did not agree with this course of action and was resigning.

The chairman. - "You are not in order in doing so (applause)."
Nisbet. - "I don't accept your ruling. I resign (laughter and applause).

"Houlding then addressed the gathering to explain his side of the matter. He clearly felt he had been unfairly treated. Houlding claimed that when he received Orrell's notice he had brought a prospectus before Everton's committee that the club a company and buy the ground, as he didn't want the liability of buying another ten thousand yards of land to replace Anfield. He said it was by the committee, yet at the general meeting in May 1891, some committee members, who had previously agreed with his propositions, had turned against him and the majority voted against the company.

Houlding was done for at Everton FC. Of the 500 present, only 18 voted in his favour. A decision had been made to split from Houlding and Anfield altogether and go to Goodison-road.

It should be noted that the rift between Houlding and Everton can also be traced to the Methodists who had been associated with the club since it was essentially the Sunday school team for St Domingo's church in the district of Everton. They disliked immensely the fact that Houlding's empire was based on alcoholic beverages. The Methodists would have undoubtedly liked to put Houlding in Prince Rupert's Tower, which was used to incarcerate criminals and is so prominent in the current Everton FC crest.

This whole sorry matter was discussed in the 19th of March 1892 issue of the Liverpool Echo. The writer was clearly not sympathetic towards Houlding starting by praising Mahon and his followers for getting rid of Houlding who he claims was essentially a "One man government" at Everton FC. "To submit Mr Houlding to such ungracious and ungenerous conduct at a public meeting might appear an outrage to some people, but when the two sides of the matter have been impartially dealt with the question might be asked, has Mr Houlding not invited it by his own dogmatic and not too courteous conduct towards the club and the committee! Did he invest his capital in the of Anfield road in a purely philanthropic Or as ? Events unmistakeably point to the latter, for he will not give 1/2 p abatement from the highest rent he can place upon it."

"The fact is Mr Houlding had come to look upon the Everton club as his own property, to do with just as he pleased, and up to within a couple of years he presided over a committee who only looked through spectacles of his own making and he accordingly "Ruled the roost". Now a few practical men, with a capacity for "business" equal to Mr Houlding, have found their way onto the executive and declined to be either led by the nose or patronised. Mr Houlding is not the man to die tamely, as his opponents discovered over of his pet athletic company. As of the ground, he declined to meet them on any but his own terms. But in this he has shown inconsistent and dogmatic spirit. First, he tells the committee that his own and Mr Orrell's properties adjacent is required for building purposes, but that the club might continue its tenancy if they will pay the rent demanded. This the committee declined as exorbitant and out of all reason. "Very well", says Mr Houlding. "You must look for another site", "here is the notice to quit my ground", thinking, no doubt, that will bring the body of "Independents" on the committee to their senses. Some of the gentlemen would have taken their shirts off their backs and given them to Mr Houlding if he had asked for them, but these did not include Messrs. Mahon and Clayton and those of the others who could afford to act differently. Instead of they acquitted the proposition thrust upon them manfully."

Houlding had a big stadium, but no team and decided to create his own team to rival Everton FC. On 30th of March, the rules of the newly-formed club were approved by its committee, rule 1 stating: "That the club called the Liverpool Football Club and shall play under the rules of the Football Association." Houlding was president of the club, Edwin Berry chairman, William E. Barclay secretary and John McKenna was alongside Barclay in charge of team affairs.

Some felt Houlding was harshly treated by Everton considering his financial muscle enabled Everton's success as seen in The Athletic and Dramatic News from 5th of April 1892 hoping for Liverpool's success: "Personally we should much like to see the new combination boom, if only to prove to Mr Houlding that, although he has been, all things considered badly treated by his colleagues, the public of Liverpool have not forgotten his great services in the cause of their pastime." A document confirming Houlding's new name of his company on of June 1892.

The first game at Anfield under Houlding's presidency was a friendly against Midland League side Rotherham Town on 1st of September 1892. Houlding was praised for his efforts in the match programme: "To know him is to like him, though there are some who are hostile to him because they never tried to know him. He is a man of energy, determination, and honesty of purpose, and under his presidency, the Liverpool Club is sure to prosper, the same way the Everton Club did."

Copyright - Arnie at LFChistory.net ([email protected]) - researched from articles in Liverpool Mercury and Liverpool Echo from 1891-92. Images of documents from the David France collection.