A Liverpool player has rarely been so badly treated by supporters All Jack Balmer’s family were Evertonians. Their houses were swathed in blue and white and little wonder. Bill Balmer - Jack’s uncle - had played eleven seasons in Everton’s first team and during that time represented England. Bob Balmer – another of Jack’s uncles – had also been on the staff at Goodison Park and, as a full-back, partnered his brother Bill in the 1907 F.A. Cup final against Sheffield Wednesday. They had played alongside each other in defence for more than 60 matches before Bill left Everton to join Southern League Croydon and later became a coach at Huddersfield Town.

Where else, then, could Jack have started goal-scoring career than across Stanley Park at Goodison? He had spurned the Balmer family tradition and any hopes of a third full-back in the family were dispelled during Jack’s schooldays at the Liverpool Collegiate. Instead he played centre-forward for the school team and, on leaving, the Old Boys. It was while he was there that he caught Everton’s eye and, in the family tradition, he signed amateur forms for them when he was only 17, after an impressive performance in the club’s opening trial game of the 1933-34 season. He did enough in that first trial match to be talked of as a capable understudy for Dixie Dean - but who could expect a raw teenager to stand in for the greatest goal-scoring machine the game had ever known?

Still an amateur, he was playing in Everton’s reserves when they offered him the chance of turning professional at £5 a week. He turned them down because at that time he didn’t think it was enough to give up his day-job as a joiner in his father’s Liverpool building business. A few weeks later Liverpool stepped in with an even better offer of £8 a week – with £6 summer wages and that was enough to tempt the well-educated youngster to turn his back on the wood shavings and try his luck in professional football.

He had actually made his first team debut at Leeds United two days before signing on full-time a few months before his 20th birthday and was to become one of the most controversial players ever to wear the red shirt. By the time I arrived at Anfield in 1939, he was well-established in the first team having played more than a 100 games for the club and shown signs then of the skills that would thrill and infuriate the fans.

He was anything but the old fashioned centre forward who could burst through, brushing aside the challenge of big, beefy defenders. He relied on his wonderful ball skills but was always ready to take a shot at goal. He also suffered from a premature loss of his hair and, with his Alistair Sim-style moustache, looked a lot older than he was for much of his career. During the war he joined the Army and won his only England cap – in a match against Wales at Wrexham when he teamed up with Everton’s Tommy Lawton in what could have been a club partnership if he hadn’t crossed the park. 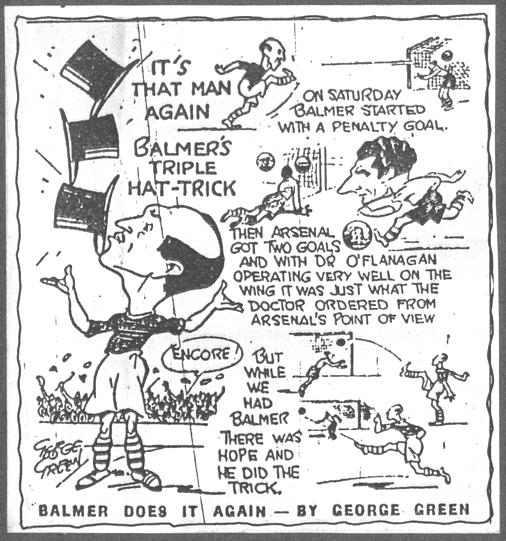 Like any good striker Jack – he was actually christened John but everyone at the club knew him as Jack – had real pace and was asked to take over as club captain after his 24 goals in 1946-47 helped us win the First Division championship in the first season after the war. He was phenomenal for much of that season and while a lot was made of his ten goals in three games – he scored a hat-trick at home to Portsmouth, four at Derby County and then a successive hat-trick at home to Arsenal – he should have been given far greater credit for his scoring run that season which saw him on target in seven successive matches between the beginning of November and the middle of December. In those games he scored 15 goals – a scoring rate that even lan Rush, the greatest goal-scorer I’ve ever seen in the English game, would have been proud of. In most of those games he was captain with Willie Fagan being out injured so he really did lead us by example. It was no surprise to anyone when the Board elected him captain for the following season.

We never recaptured our championship form and slowly but surely the fans began to turn against Jack. I don’t honestly think I’ve ever known a player so harshly treated by Liverpool supporters as he was – but he managed to smile his way through although it hurt him deeply. He was a local lad, born and bred in Liverpool, and he gave everything to his only professional club but there was a group of supporters who could never forgive him because he didn’t get stuck into the tackle. As captain it was even harder for him to take and while the fans didn’t appreciate his attributes there was no-one at the club who didn’t support his continued selection for much of the later stages of his career.

He had marvellous ball control and was an ideal partner for Albert Stubbins. He accepted the criticism but refused to change his style insisting: “They were entitled to their opinion. Maybe I didn’t go in for the crunch tackle but that kind of thing wasn’t my idea of football. I was never a coward at the game but I got a shudder when I saw the boot going in.”

We shared one particular experience that neither of us enjoyed – we were both left out of the 1950 Cup Final team although in Jack’s case it may have been a bit easier to accept as he hadn’t played in any of the previous cup matches – I played in them all but one – although he was in the team that lost at Portsmouth a week before the Wembley trip.

His reign came to an end shortly after Don Welsh took over as manager although he was called for a couple of matches early in 1952 when we went through a fairly depressing period, he never captured the form that had made him such a goal-scoring sensation. He stayed at the club on the coaching side for a few more seasons until he finally quit in 1955 to concentrate on his building business in West Derby Village where he was living with his wife Edith and their two sons John and Colin. Sadly, Jack died on Christmas Day, 1984, when he was 68.