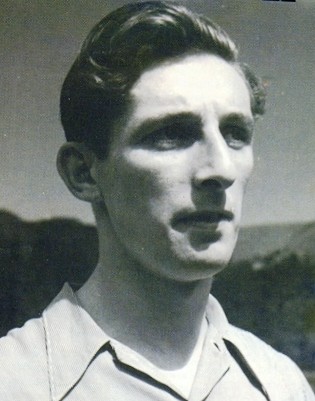 Tranmere Rovers’ loss was Liverpool’s gain when Laurie Hughes decided to leave Prenton Park for a career at Anfield. He had already been ignored by both Liverpool and Everton when he signed amateur terms for the Birkenhead team. Apparently the Big Two thought that he was too small to make it professionally even though had never missed a game for either Liverpool Schoolboys or the county side. He asked for a trial with both clubs but, to use his own words: “They didn’t want to know me!” It was a rash judgement that both could have come to regret in later years – but Liverpool had the rare opportunity to have a second chance of getting him on their books. Laurie was a dyed-in-the-wool Scouser and, even now, takes some exception to the entries in virtually every soccer reference book which lists his birthplace as Waterloo. He points out forcibly: “I was born in Liverpool – just off Everton Road. The family was in business in Picton Road, Wavertree, and I can remember helping to carry the goalposts to Shiel Park. Because of the war my mother moved out to Waterloo. That’s when I started playing for Tranmere Rovers, and I think that’s how people got this impression that I was born in Waterloo. But if that had been the case, I would never have played for Liverpool Boys.”

It was after the two giants turned him down for trials – he was the smallest boy in the Schools team along with Jimmy Dunne whose father, also Jimmy, was a skilful inside right with Everton in the pre-war days and a member of that famous Wembley Wizards Scottish forward line that licked England 5-1 in 1928 – that Laurie linked up with Tranmere. While his schools’ team-mate Jimmy went into the Merseyside and District League before being spotted by Wolverhampton Wanderers in November, 1942, Laurie was in the Tranmere war-time team before the end of 1941 and had the value of nearly 40 first team matches as an amateur before Liverpool moved in to offer him the professional contract he craved for.

He began at Tranmere in the Boys team as a wing-half or inside forward but as he developed physically he was promoted into the first team within three months. By the time he moved to Anfield he was a recognised centre-half – a position he was to fill the rest of his Anfield career. As Laurie grew physically he lost some of the attributes he had as a lad – “At one time I could beat a man on a sixpence but when I grew taller I became gangly and never had the same skill I had as a little boy.” – but he was always a thinking centre-half rather than an outright stopper.

He could always read the game well and he used his brains to build up a business outside football. At one time he had a newsagent’s shop on Lisburn Lane and later he also opened fish and chips shops and worked in the betting industry before finally retiring about ten years ago. He never had any real desire to leave Liverpool - even when he was seeing out his days in the reserve team. In all he played more than 300 matches for the club but even that total was restricted by injuries which saw him miss out on most of the 1948-49 season and, again, four years later. A knee injury, ironically sustained when he twisted awkwardly while playing in a charity in a game for an England side against the Canadian tourists at Stamford Bridge, was largely responsible for him disappearing from the international scene. He had been one of the uncapped players picked to travel to South America for the 1950 World Cup and one of his three games was that fateful 1-0 defeat against the United States. Despite the result Laurie came out of the World Cup with some credit and would almost certainly have been chosen for England’s next match against Northern Ireland in Belfast, had he not again been injured three weeks earlier. He was never given another opportunity to play for his country as the Football Association mandarins (who picked the team in those days and then left Walter Winterbottom to coach their favourites) tried Allenby Chilton, Leslie Compton, Jack Froggatt, Jim Taylor, Malcolm Barrass, Harry Johnston, Derek Ufton and Sid Owen over the next four seasons before Billy Wright was eventually moved from right half to to make the number five jersey his own personal property for many, many years.

Liverpool’s decline from the most powerful team in the First Division to a mid-table side and then to a bottom of the table set-up in 1954 couldn’t have helped Laurie’s England claims although he remained a consistent stalwart at Anfield. It was hard to replace him when age began catching up and after missing only four matches between the start of the 1954-55 season and the end of the 1956-57 campaign, he started off 57-58 very much as second choice behind the tough Dick White who had learnt his trade in some 30 months in my Central League team.

Laurie’s last first team appearance came in the only game Dick missed that season – at Charlton Athletic where he was unlucky enough to be in a defence that lost 5-1! He soldiered on for a couple more seasons playing out his time in the reserves before hanging up his boots at the end of the 1959-60 season to concentrate on his flourishing businesses.

Liverpool had been his only professional club, but one of the little known facts at the time was that he almost joined Manchester United in the wake of the Munich disaster. Mark Jones was one of the players so tragically killed when the club’s BEA Elizabethan aircraft careered off the runway as it failed to complete it’s third take-off on Thursday, February 6, 1958. Jimmy Murphy, Matt Busby’s right hand man at Old Trafford, hadn’t been in the flight because he was in Cardiff with the Welsh team and was left to pick up the pieces. One of the first players he inquired about was Laurie who, at that time was in the reserves, but before any deal could be struck the United management decided to stick with Ron Cope to see them through their blackest days.