West had the makings of the finest full-back in England but his career suffered from a few serious setbacks. He was described in the club programme in 1907 as "perhaps the best and classiest back that had been seen at Anfield and his style was perfect." A more detailed description of his playing style was in the programme on 18 March 1905: "West is an ideal full back, reliable in tackling, and always cool and collected under the severest pressure. His methods are such as commend themselves to all who desire to see football played with a maximum of skill and a minimum of physical force. West does not rely upon the latter quality; he calmly awaits the oncoming forward and judges the precise moment for intervention with admirable facility." West was signed in the autumn of 1903 having starred at second division Barnsley for two years since arriving from Ilkeston. Several big clubs were chasing his signature and Small Heath had already had a bid turned down. He had impressed so much at Barnsley that a testimonial was to be given him by his admirers. West went straight into Liverpool's first team and played in the remaining 24 first division games of the 1903/04 season. He strengthened a defence that had leaked 13 goals in the first five League fixtures, all lost, but Liverpool were eventually relegated in seventeenth place, one point behind Stoke City.

West was absent until Christmas 1904 as Liverpool tried to make their way out of the Second Division due to an unfortunate shooting accident as reported by the club programme. "West had been training for a 120 yards handicap and finished his preparation with a week at Lytham. Everything was complete, and he, accompanied by his trainer, went to take the final spin before leaving for Keswick where was due to run the following day. Not having had much practice at starting with the pistol it was decided to adopt this method. Whilst the trainer was handling the weapon, it accidentally went off and West received a bullet under his right shoulder. He walked away some 200 yards, and then, staggering, fell into his trainer's arms. Fortunately the bullet did not penetrate the lungs, but spent itself by travelling along the outside of the ribs to the front part of the chest." West was in critical condition as he had been actually been shot with two bullets just above the heart by trainer William Norman "who was naturally much upset."

West eventually made 16 appearances in the 1904/05 season as Liverpool bounced straight back into the top league by winning the Second Division and then missed just a single game a year later as the club won its second First Division Championship in 1906. West could never easily forget the match against Leicester Fosse in the first round of the FA Cup on 13 January 1906 when he missed two penalties, one in each half! Thankfully for him Billy Bannister missed a penalty as well and Liverpool beat the Foxes 2-1 but were conquered by Everton in the semi-finals. West got injured against Middlesbrough after only four games had passed of the 1906/07 season and then once he had recovered "the most severe family tragedy trouble that could befal a man happened" and he missed the rest of the season. West was a regular the following season, but only played 15 games in his last two years at the club, After a brief stint with Reading at the end of the decade, he returned to Anfield in 1910 but only made four more League appearances for Liverpool before being transferred to Notts County, where he missed only two games over the next three seasons. 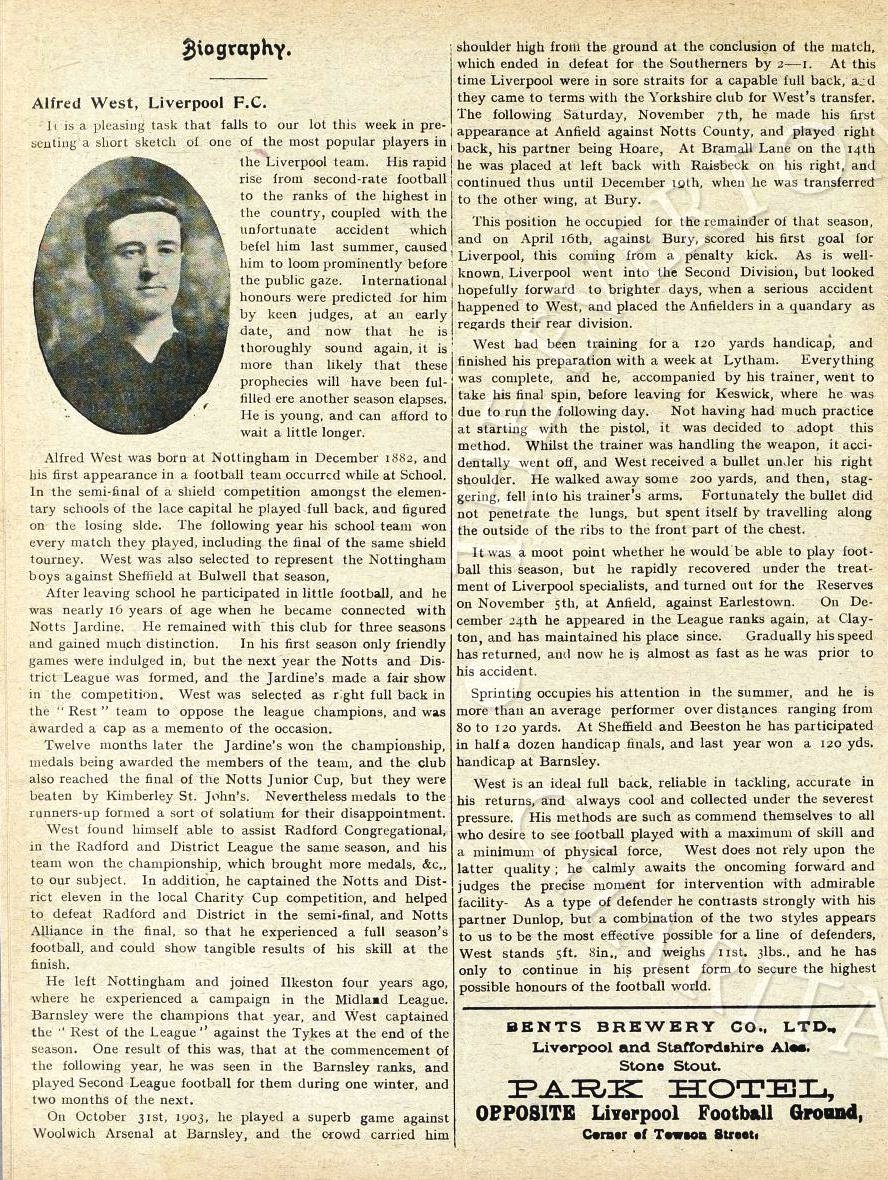