"He is apt to grow over-enthusiastic, the fault of his Celtic temperament I suppose, but is often unfairly penalised." Right-half Parry was so described by joint Everton/Liverpool programme in 1904. Parry moved to Leicester to get a job in the engineering trade but signed as a professional for the local club. He admitted he "went into it blindly as I had no intention of becoming a professional." Parry was a very clever player who "could twist and turn and tie the opposing forward in a tangle and then steal the ball from his toe." Parry was called up by Wales on 16 occasions during his nine years at Anfield, even though he was born in Trefonen, three miles east of the England-Wales border, in Shropshire. Parry made his debut early in the 1900/01 season, the year when his club won the League title for the first time. He didn't play enough games to qualify for a medal then but made up for that later in the decade when Liverpool won the Second and First Division in successive seasons, 1904/05 and 1905/06. He wasn't called on for much more than half the fixtures over the next three years and eventually moved to Partick Thistle at the end of the 1908/09 season soon followed by his old Liverpool teammate Alex Raisbeck.

Parry coached in South Africa for a while in 1911-1913 and later held coaching positions at Barcelona, Frankfurt, Cologne and in the Channel Islands. While serving as a Second Lieutenant in the South Wales Borderers he proved a popular figure as reported by one crew member who was on the ship that transported Parry to the Greek island of Lemnos in September 1915. "Of course, he was a person of no small importance in the eyes of our crew, who are all Liverpool men. He was the life and soul of the party, and it was always he who started the music and singing. In an impromptu concert held on the last night, the cry was always ‘Parry.’" The organ-playing returned to Liverpool many years after he had left as a player to bring his coaching skills to the club where he played the majority of his professional career. Having suffered from long-term effects of wartime gassing he died of chronic bronchitis on 24 March 1935, shortly after accepting a coaching position in Jersey. He was sixty years old and had never married. 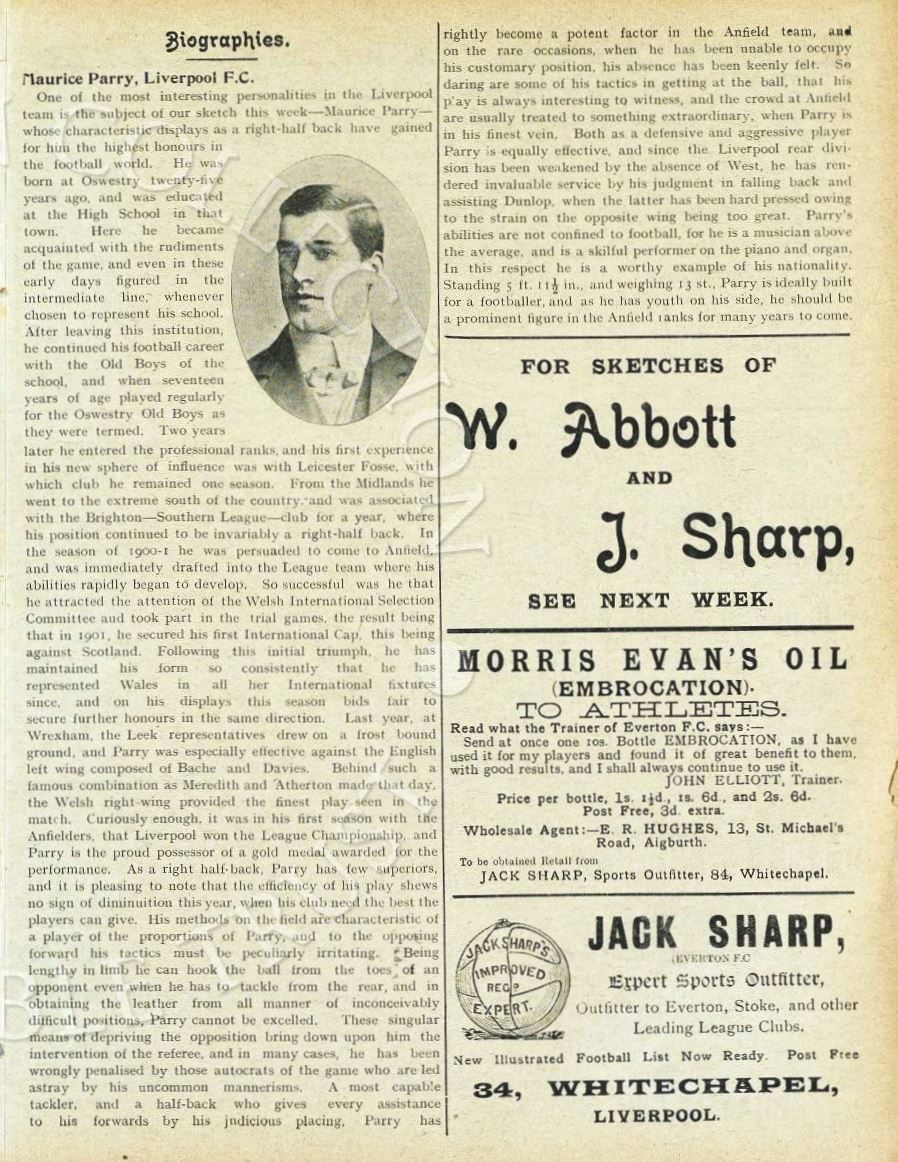