Doig started as a right-winger for amateur side, St Helena, in Arbroath. Recruited by Arbroath Football Club in 1884 he played as a 'keeper for about two seasons in the reserve side until he made his first official appearance for the Maroons in February 1886 when 19-years-old. Doig had high expectations and taught himself to punch a ball swinging from a crossbeam until he could make it swing twice over the bar, while others could do this only once. By running back and forth, lifting dumbbells placed at either goalpost, he built up his strength, agility and speed. In the early days of football only he and the giant, William "Fatty" Foulke, could throw a ball over the halfway line. Doig was equally skilful with the right and left. In November 1889 Doig was lured south to play for Blackburn Rovers in the English League. However, he had a disagreement with the club after one game and returned home. As he had taken part in a professional game Doig was no longer selected to play for amateurs Arbroath. Sunderland A.F.C were elected to the Football league in 1890 and Doig was recruited to replace their amateur goalkeeper. Unfortunately, his first game was marred by the fact that the Football League deemed him ineligible as he had not been registered with the club for seven days and Sunderland became the first club to be fined and have points deducted for this offence. Sunderland, with Doig as an ever-present in goal, won the title in 1892 and also in 1893, the team titled as "The Team Of All The Talents". Further championships were won in 1895 and 1902. Doig completed 14 years' service with Sunderland, at that time a record. He played in 417 league games, missing only thirteen, 35 FA Cup games and a further 216 representative and friendly games.

Liverpool, who were relegated to the Second Division in 1904, signed Doig on 5 July 1904 for £220 after the clubs had argued considerably over his transfer fee, causing quite a stir. Doig had been declined a free transfer by Sunderland in late June as he had been offered maximum wages by the club. Doig's old Sunderland boss, Tom Watson, was now in charge at Liverpool and certainly knew that he was getting a quality 'keeper. Doig became the oldest player to make a debut for Liverpool aged 37 years and 307 days on 1 September 1904. Liverpool promptly won the Second Division Championship in his first season, Doig being an ever-present conceding only 25 goals in 34 games and keeping 16 clean sheets. Doig was highly praised for his performances by the club programme in November 1904: “The defence of the Livers away from home has been wonderful. This speaks well for Doig whose advent into the team was a masterstroke. The veteran has displayed all his old ability, and although he has seen so many years service he is as agile and clever as ever. To have such a player between the posts must give those in front of him every confidence, and if he keeps fit and well there is no doubt but that at the end of the season it will not be his fault if the team does not go top.”

In 1905/06 Doig lost his place to future England international Sam Hardy after only eight games of the season when Liverpool won their second League Championship. Doig was suffering from rheumatism and he only played in nine more first division games in the next two seasons. His last game on 11 April 1908 at the age of 41 years, 165 days is still a record for the club. Liverpool told Doig his Anfield career had ended by having a postcard delivered to his door which stated, "Your services are no longer required." Stanley, his son then aged six, remembers taking the card to his father who upon reading it flew into a rage, sweeping crockery from the table and all the children scuttled up the stairs to keep out of the way. Two further seasons followed, playing for St Helens in the Lancashire league clocking up a further 85 games, before finally retiring in the summer of 1910. In a career spanning 25 seasons, Ned Doig played in at least 1,055 games of football. He died on 7 November 1919 from Spanish flu at the age of 53.

Profile based on the writings of Ned's grandson and Liverpool FC historian, Eric Doig.

The Arbroath Herald and Advertiser for the Montrose on 25 September 1890.

My father was the Liverpool goalkeeper, Ted Doig, who signed for the club in 1904. Before that, he had played with Arbroath in Scotland and then had been the goalkeeper of the famous Sunderland 'Team of all the talents'. He was one of the greatest goalkeepers of all time and was in the Scottish side...

The Kop didn't have a roof on in those days. It was a big mound, like a giant wall. There were all these steps going up from Oakfield Road with about six double gates to get in. And you climbed up all these steps, and there it was below you. It was impressive even in those days. There were rails on it just as there are today. but not as many. Everyone used to stand there in their flat hats and mufflers. I had a bowler, and it had a red ribbon on it with the club crest which my father had given me. The ribbon had been on a straw boater which was given to him when the club visited Paris in 1904. When Liverpool scored, everyone used to throw their hats into the air. Sometimes you wouldn't get get your own hat back and you'd have to make do with someone else's. I can remember being swept out of the ground by the crowds, carried along with my feet off the ground. It was terrifying. I was only a youngster.

Stanley Doig on the Kop experience in the early 20th century 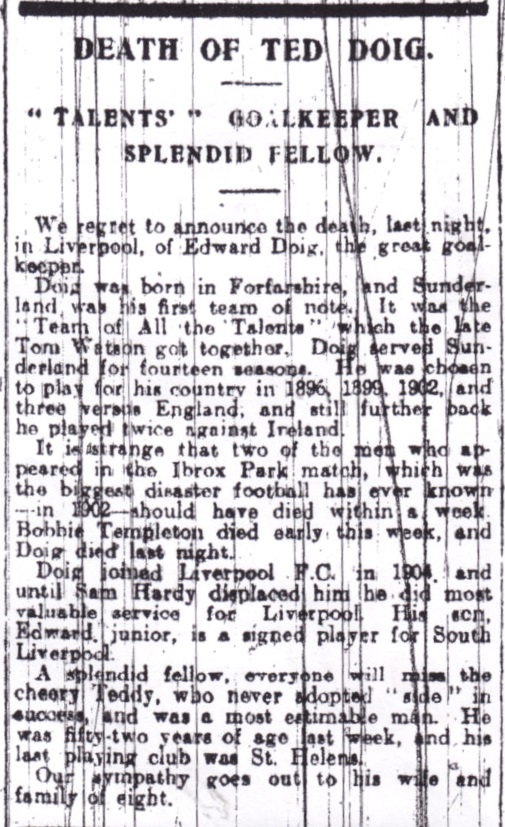 Doig's passing in the Echo