After one season with Blackpool in the Second Division where he scored 12 goals in 17 games Cox was transferred to Liverpool for the considerable sum of £150 enabling the Lancashire club to announce a loss of £441 as opposed to over £1,000 for the previous campaign. The twenty-year-old scored on his debut three months after his arrival in a 2-0 win over Notts County on 12 March 1898 as Liverpool sought to establish themselves as a first division club. Cox was in the line-up in the first game of the 1898/99 season as well as newcomer Alex Raisbeck. They quickly became key components of Tom Watson's side who seemed finally ready to challenge for the League Championship and the Cup. Their heroics didn't, however, guarantee them silverware as Liverpool were knocked out of the semi-finals of the FA Cup by Sheffield United in a second replay and defeated 5-0 by Aston Villa in the last League game of the season when a win would have guaranteed Liverpool the title instead of Villa. The 1899/1900 season was a terrible anti-climax for Cox. Liverpool lost their first eight games of the season and Cox got injured in the middle of November and was out for two months. Liverpool won eight out of their final ten games but only finished a disappointing tenth. The arrival of centre-forward Sam Raybould in January 1900 had given the team much-needed firepower. Cox only missed two games in the 1900/01 season when Liverpool incredibly only twice top of the League, after the first game and, crucially, the last! Cox contributed ten goals in 32 matches as Liverpool won their first League Championship, a fantastic goal ratio for a winger. Despite his success Cox "wanted a change" but since Liverpool offered him the maximum wage as his contract was renewed for the following season the Football League refused his application.

At the beginning of the 1902/03 season, Cox moved from right to left-wing as future legend Arthur Goddard, who had joined seven months earlier, established himself on the right. Liverpool had played well below expectations following their 1901 triumph and relegated in 1904. Cox wanted to go to Fulham as he objected to playing in the Second Division and his girlfriend at the time was believed to be living in London. Merseyside rivals, Everton, also tried to tempt Liverpool to cash in on him. The Blues were prized out of the move and the Football Association did not allow his transfer to Fulham as he had been offered maximum wage at Liverpool. Thankfully, Cox stayed as he was instrumental in Liverpool's remarkable achievement of winning the Second and First Division in two consecutive seasons in 1905 and 1906. In May 1909 Cox returned as player-manager to Blackpool where he had already achieved legendary status after only one season at the beginning of his career.

John Thomas "Jack" Cox was said to have been born in Blackpool on 21 November 1876 in Who's Who of Liverpool 1892-1989 by Doug Lamming, but we have 21 December 1877 from his birth certificate. Cox indeed lived in Blackpool, but he moved there 3/4 years old after being born on 266 Vauxhall Road in Liverpool.

John Thomas "Jack" Cox was said to have been born in Blackpool on 21 November 1876 in Who's Who of Liverpool 1892-1989 by Doug Lamming, but we have 21 December 1877 from his birth certificate. Cox indeed lived in Blackpool, but he moved there 3/4 years old after being born on 266 Vauxhall Road in Liverpool.

Cox and Raisbeck back at Anfield

"A brilliant, but erratic genius. His great weakness is a tendency to over elaboration when in possession of the ball, but when the mood is on him, there is no hesitation; no finessing to discover the way towards goal. This is Cox, in his International humour, and when such is the case, the opposing defence know about it. On his day there is no cleverer outside-left in the kingdom than Cox." 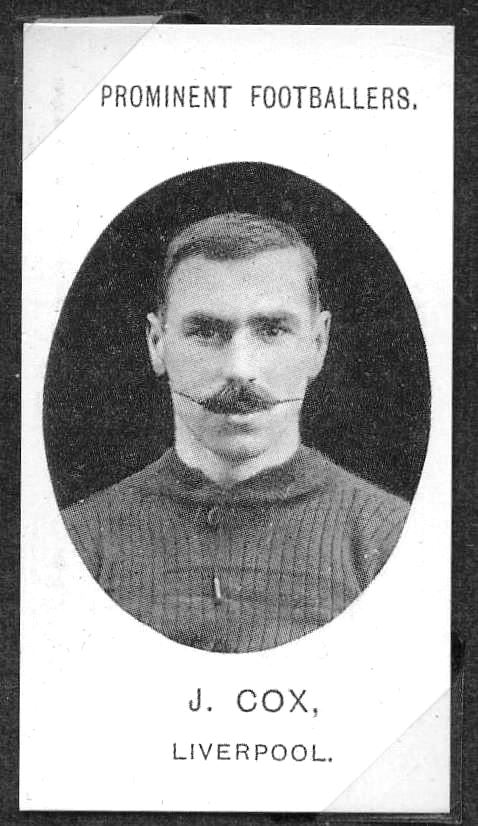 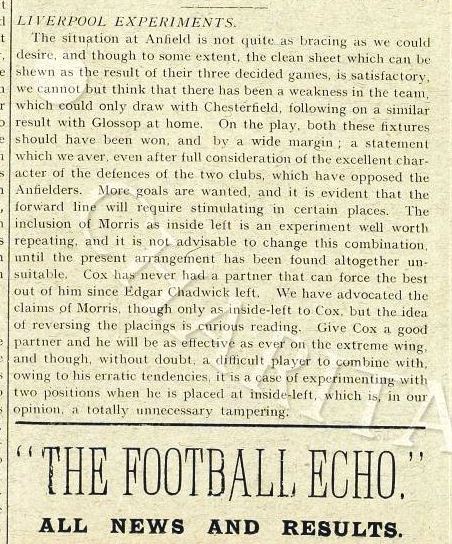 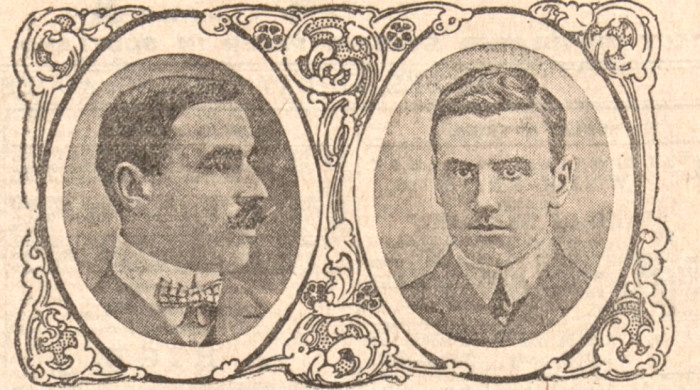 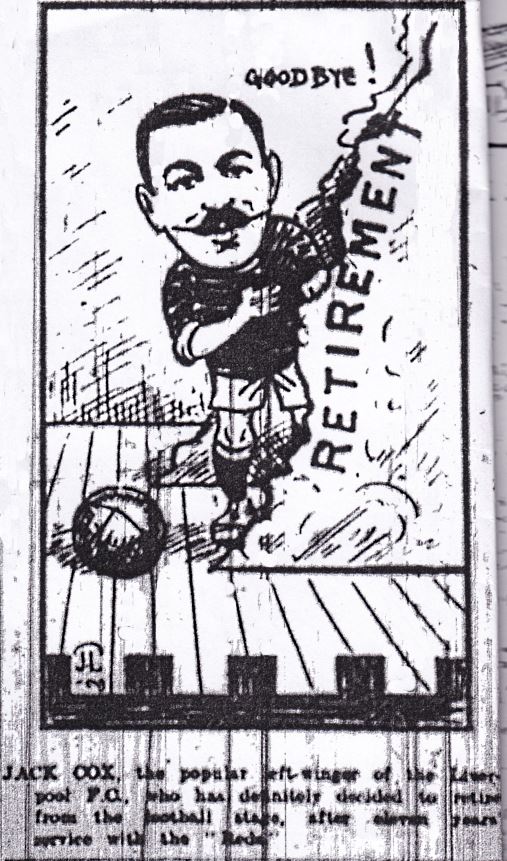 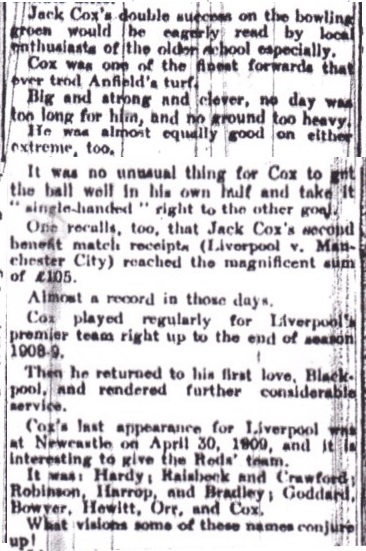 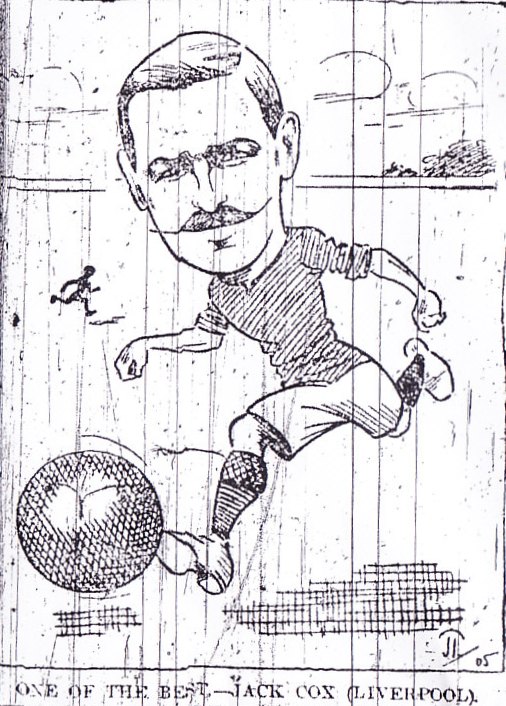 One of the best! 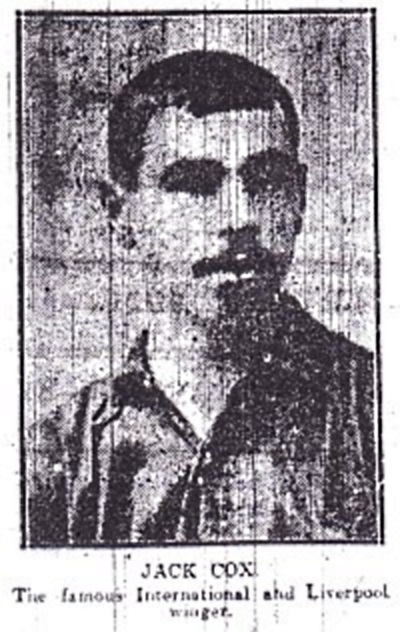 The famous international and Liverpool winger