Matt Busby, along with Tiny Bradshaw and Jimmy McDougall - formed an all-Scottish half-back line that certainly ranks with the best the club has ever had in those three positions at any one time in its history. Busby started out as a youth team player at Alpine Villa where he won the u-18 Scottish Cup before moving to Denny Hibernian. He had been watched by scouts from Rangers and Celtic, but when Busby went on a trial to Rangers they found out he was a Catholic and Celtic weren’t impressed that he had been at Rangers. He moved south to Manchester City as an inside-forward in February 1928 but they moulded him into a classy half-back. Busby was relieved to make the grade: “There were only two ways for boys to go in those days: down, working in the pits, or up if you happened to be good at football.” In seven years Busby played 226 Football League games for City. His biggest disappointment was losing the FA Cup final 3-0 to Everton in 1933 but the highlight was winning the Cup a year later when Portsmouth beaten 2-1. At 26 Matt Busby was an experienced professional when he was signed by Liverpool in March 1936 for £8,000. He almost immediately took over the right-half position from Robert Savage. Busby didn’t miss many matches over the next three seasons when Liverpool a mediocre first division team. But like so many of his contemporaries, Busby’s league career was cut short by World War II.

Busby’s greatest strength on the field was his passing. The Liverpool Echo waxed lyrical about him in September 1936. “Busby goes far up if so inclined and when he starts his upward trend one knows his command of the ball will be such he will not be dispossessed. He is the richest and most practised passer the game has ever known. Hence he appears in a blinding light when compared with some other half-backs.” Matt Busby was appointed as coach and assistant manager to George Kay at Anfield for £10-a-week in May 1944 and was due to take his post when World War II was over. On 14 February 1945, Busby, who was at this time an instructor at the Royal Military College, asked to cancel his coaching contract at Liverpool as he'd had other offers. A few days later he accepted the manager’s position at Manchester United. Curiously, Busby continued to be registered as a Liverpool player and continued to play for them until April 1945 and was ready for action as late as September (Liverpool politely declined) as he moved closer to taking over formally at Manchester United on 1 October. Busby took a bold step but his achievements at Old Trafford were nothing short of astonishing with the birth of the “Busby Babes”, five First Division Championships and two FA Cups. He survived the Munich air crash and then a decade later masterminded the European Cup-winning team of 1968. Sir Matt Busby is rightly considered one of the best managers of all time.

"Although a Liverpool player at the time, Matt still retained many connections with Manchester City and his former colleagues at Maine Road. During the summer he and Alex Herd used to play golf together back home in Scotland. One day Alex did not turn up for their usual round, and upon making inquiries from him later Matt learned that he had taken Willie McAndrew, the manager of Hamilton Academicals, in his car to see my parents about getting me to sign for his old club. On being told by Alex that I had turned down the invitation Matt immediately telephoned Mr. George Kay at Anfield and suggested that this Liddell lad might be worth an inquiry. 'Liddell eventually became a Liverpool player, a very fortunate day for Liverpool', says Matt, who goes on to add some complimentary remarks about me which are best left unsaid here. But let me add it was also a very fortunate day for Billy Liddell."

Billy did not know who had recommended him to Liverpool, but found out when he read Matt Busby's book later on his Liverpool career

"In 1967, we arrived at Anfield to play Liverpool and as I glanced out of the window of the coach I saw Bill Shankly standing at the main entrance. I was the first player to alight from the coach and when I reached the entrance Bill shook my hand warmly. 'Good to see you again, George,' he said. 'You're looking well, son.' This was unusual for him, and knowing Shanks to be a wily old fox, I decided to hang around to try to find out what he was up to. As each of the United players entered Anfield, Shanks shook his hand, welcomed him and told him how good he looked. Eventually, Bobby Charlton, a born worrier, came up to Shanks. 'Bobby, son. Good to see you,' Shanks said, shaking his hand. 'But by God, if ever there was a man who looked ill, it's you, Bobby!' Bobby's face went as colourless as an icicle. 'Ill? I look ill?' he repeated, running the fingers of his right hand over his forehead and down his right cheek. He was visibly shaken. 'Aye, Bobby, son. You look like you're sickening for something. If I were you I'd see a doctor as soon as you set foot back in Manchester.' Shanks patted Bobby on the back and took off down the corridor, leaving him trembling in the foyer.

In the dressing room, Bobby was conspicuous by his absence and, ominously, there was a delay in announcing the team. We sat around kicking our heels, no one daring to get changed in case Matt Busby had a tactical plan which meant leaving one of us out. The thought of getting changed only to be told to put your clothes back on because you're not in the team is a player's nightmare. Eventually Matt Busby entered the dressing room with Jimmy Murphy and told us they had reshuffled the team which had beaten West Ham the previous week. Bobby Charlton was unavailable. He'd suddenly been taken ill."

"One day in 1959, when Huddersfield were playing Cardiff City, Tom (T.V.) Williams, who was then chairman of Liverpool, and Harry Latham, a director, came down the slope at Leeds Road to see me. Mr Williams said, 'How would you like to manage the best club in the country?' 'Why, is Matt Busby packing it up?' I asked."

"We [Smith and Chris Lawler] only found out later that a certain gentleman from down the East Lancashire Road has been monitoring our progress in the Central league. Matt Busby, the manager of Manchester United, was still rebuilding after the tragedy of the Munich Air Disaster in 1958. Later Bill Shankly would reveal to me that Busby had offered him £50,000 for the joint services of Messrs Smith and Lawler. The boss wouldn’t let his young prospects go. He had his own agenda and thankfully I was on it."

“Probably the classiest wing half-back I have ever met was Matt Busby, and I am not surprised he has made such a success of his job as manager of Manchester United, for Matt was not only a great player, he was also a great teacher. Surely football has never seen such an immaculate passer of the ball than the cheerful, likeable Scot. It was uncanny to see him change the direction of a game with one shrewd pass, which always went speedily and accurately to the right man. There was never anything slipshod about Matt. Only the best would do and no matter where the ball was he was always working, always taking up position, always thinking a couple of moves ahead of anyone else. So no wonder Matt Busby covered more ground in each match than any other player on the field, and to what wonderful purpose!"

Tommy Lawton, the English striker extraordinaire, praised Matt Busby’s strengths as a player, in ,” Lawton said in his book “My Twenty Years of Soccer”.

“Matt Busby was a man you could look up to and respect. He’d played the game and people like him weren’t solely tied down with tactics, which was a valuable lesson for me.”

When Bob Paisley joined Liverpool Matt Busby was club captain and they remained the best of friends ever since. 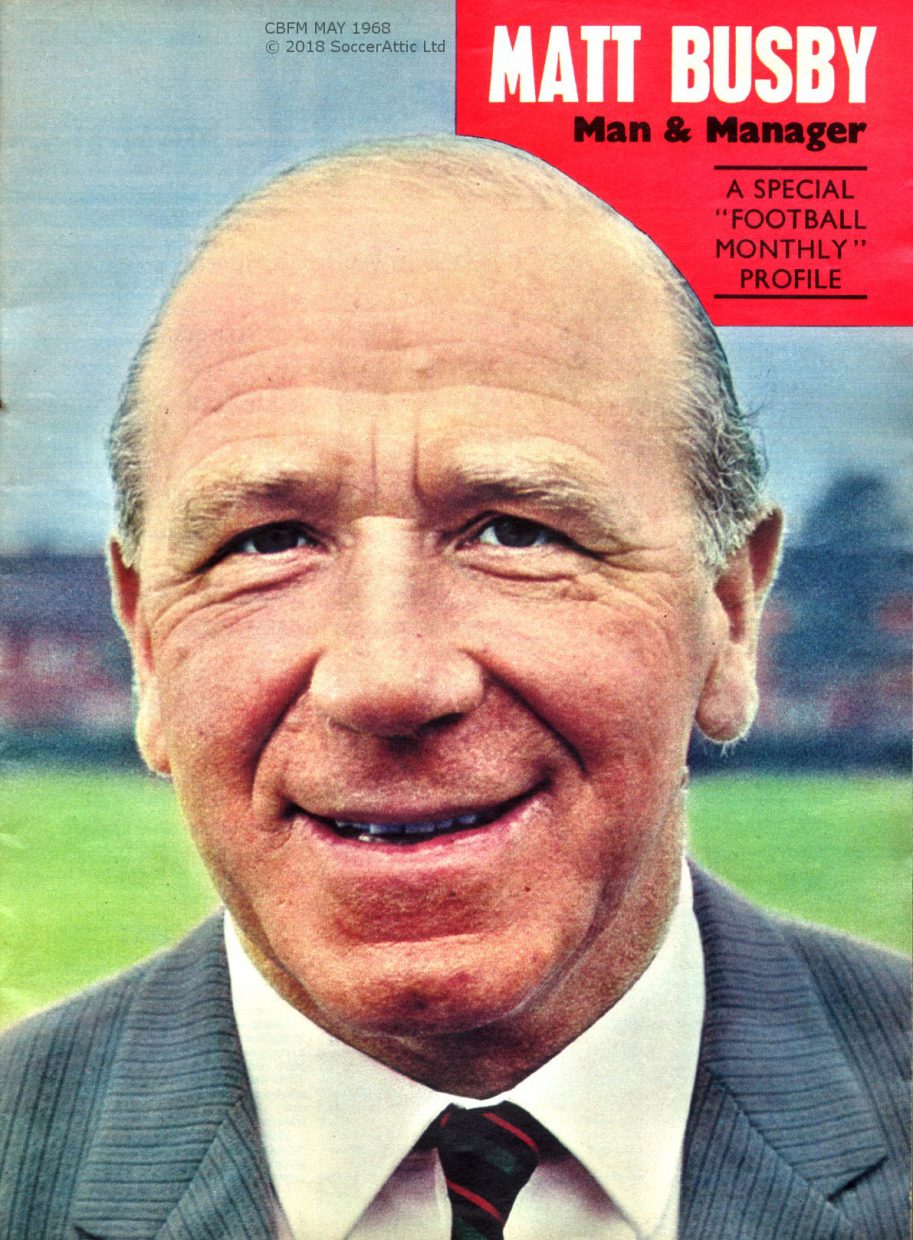 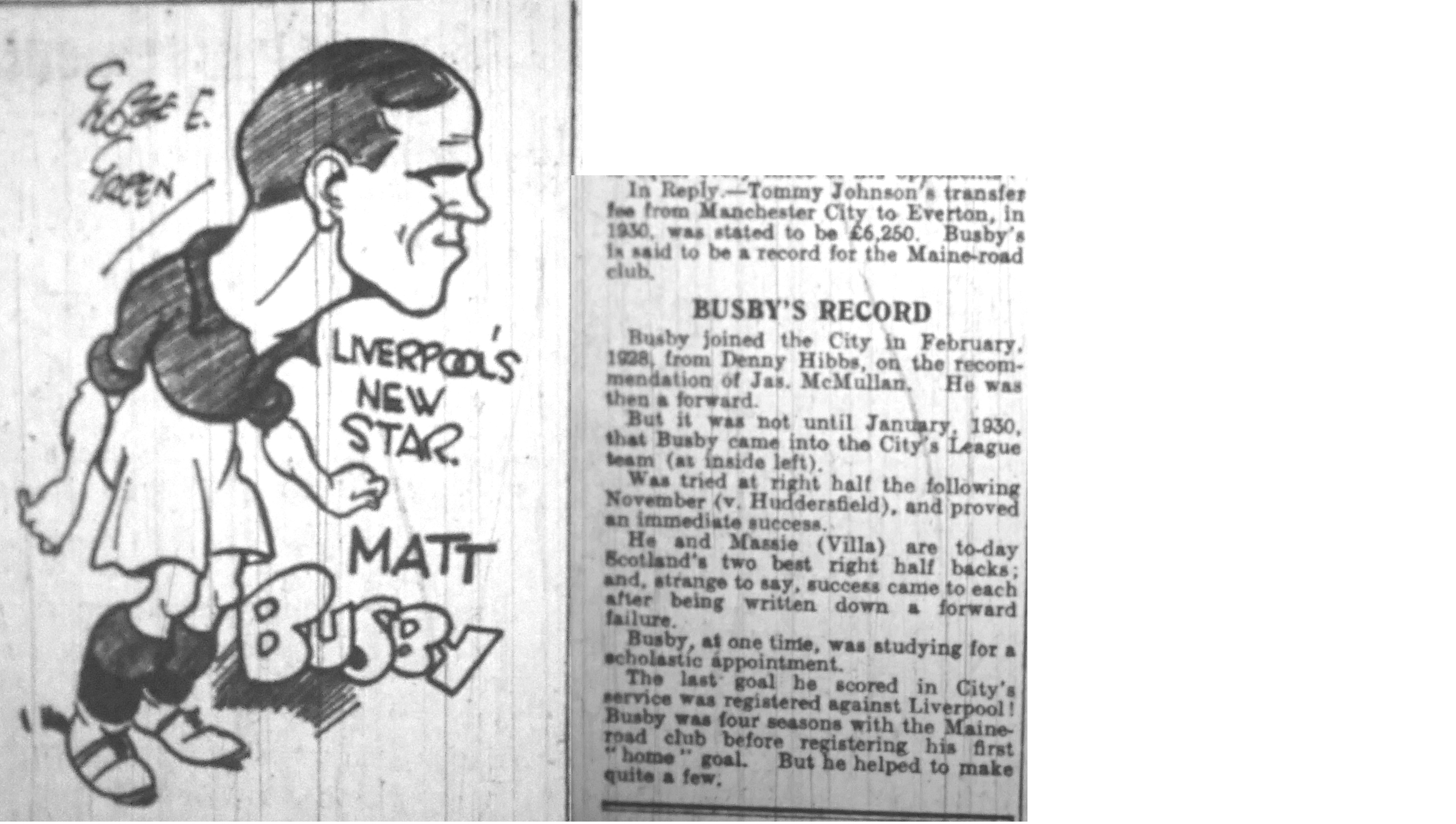 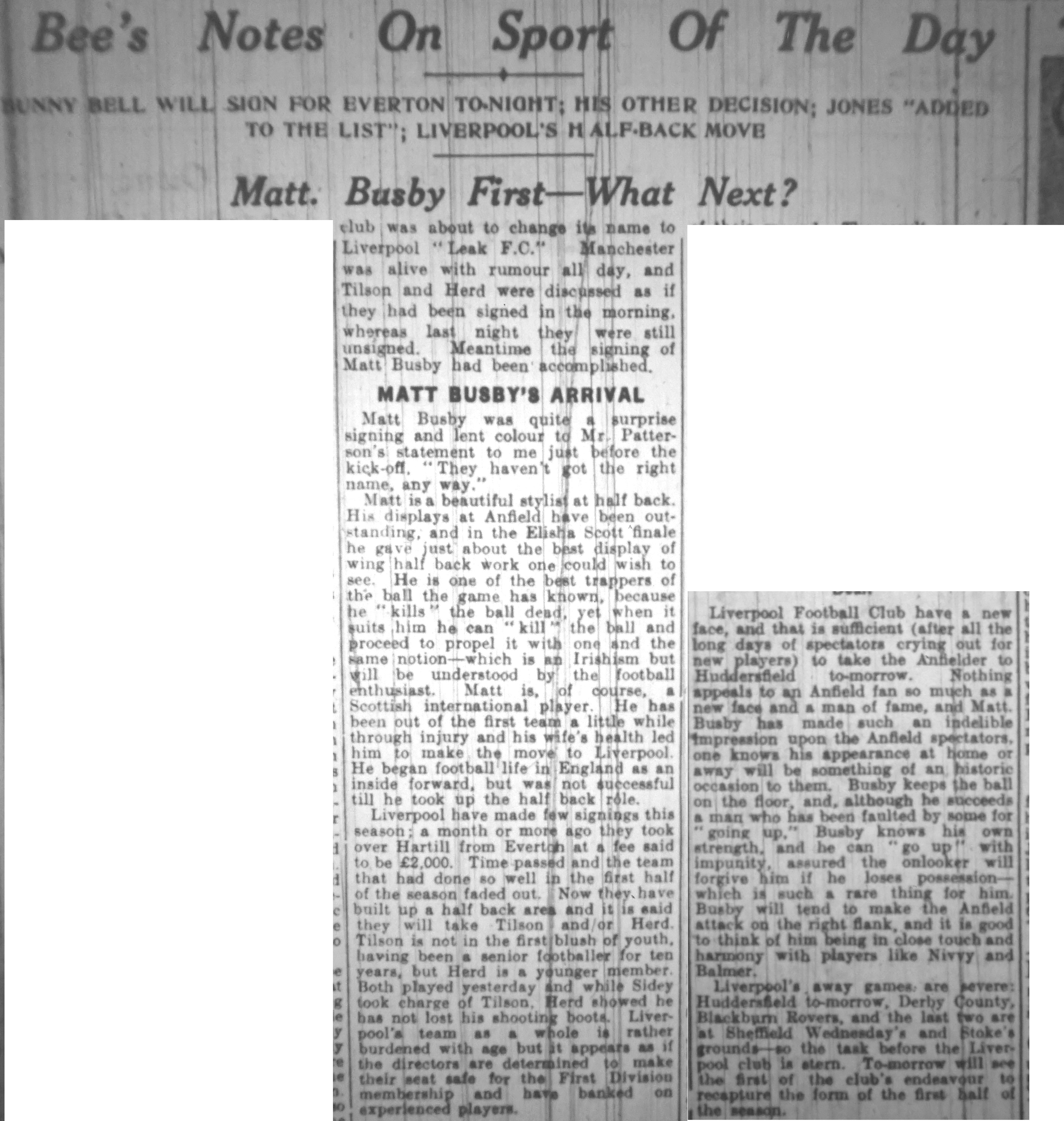 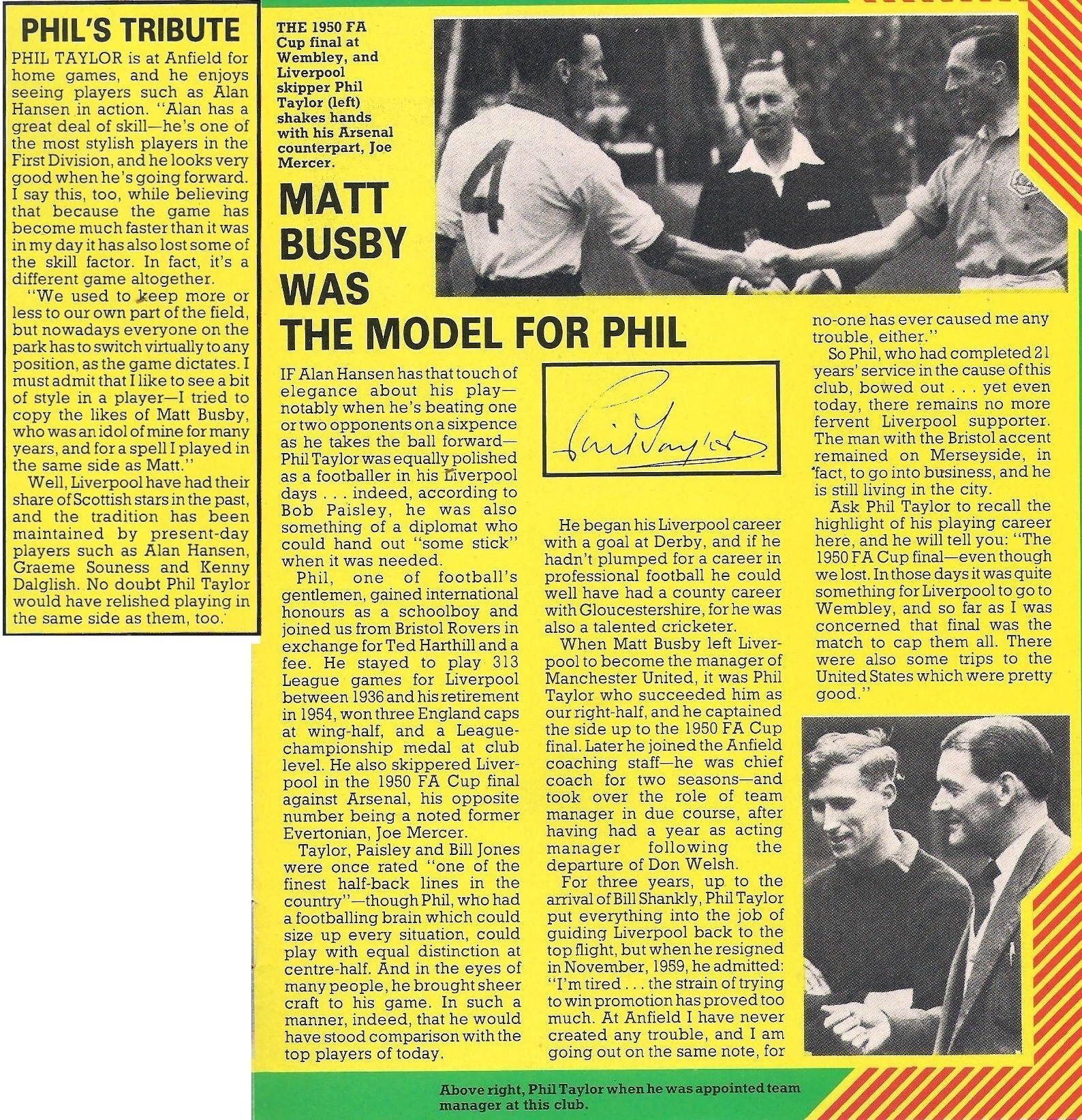 Matt Busby was model for Phil 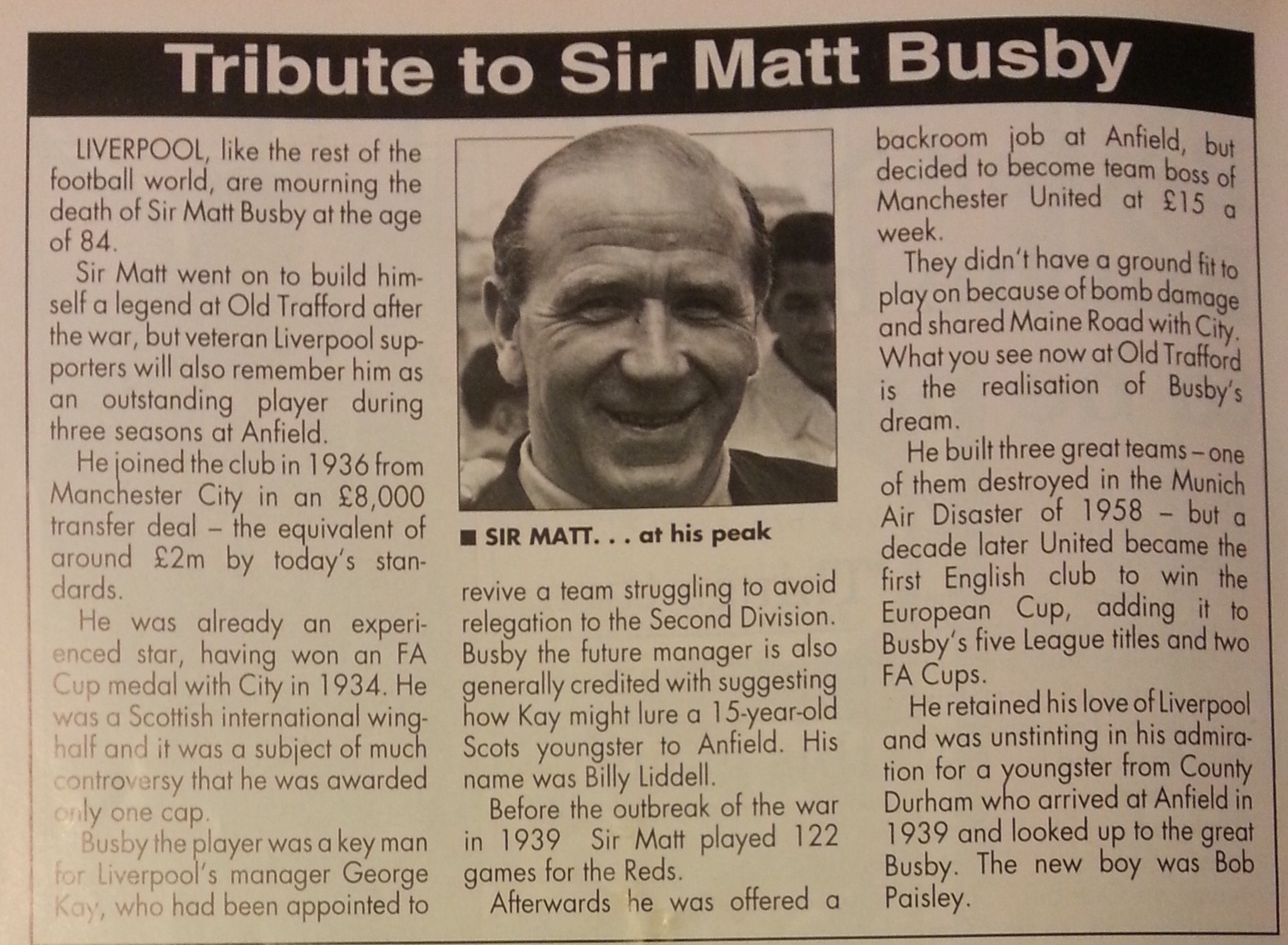 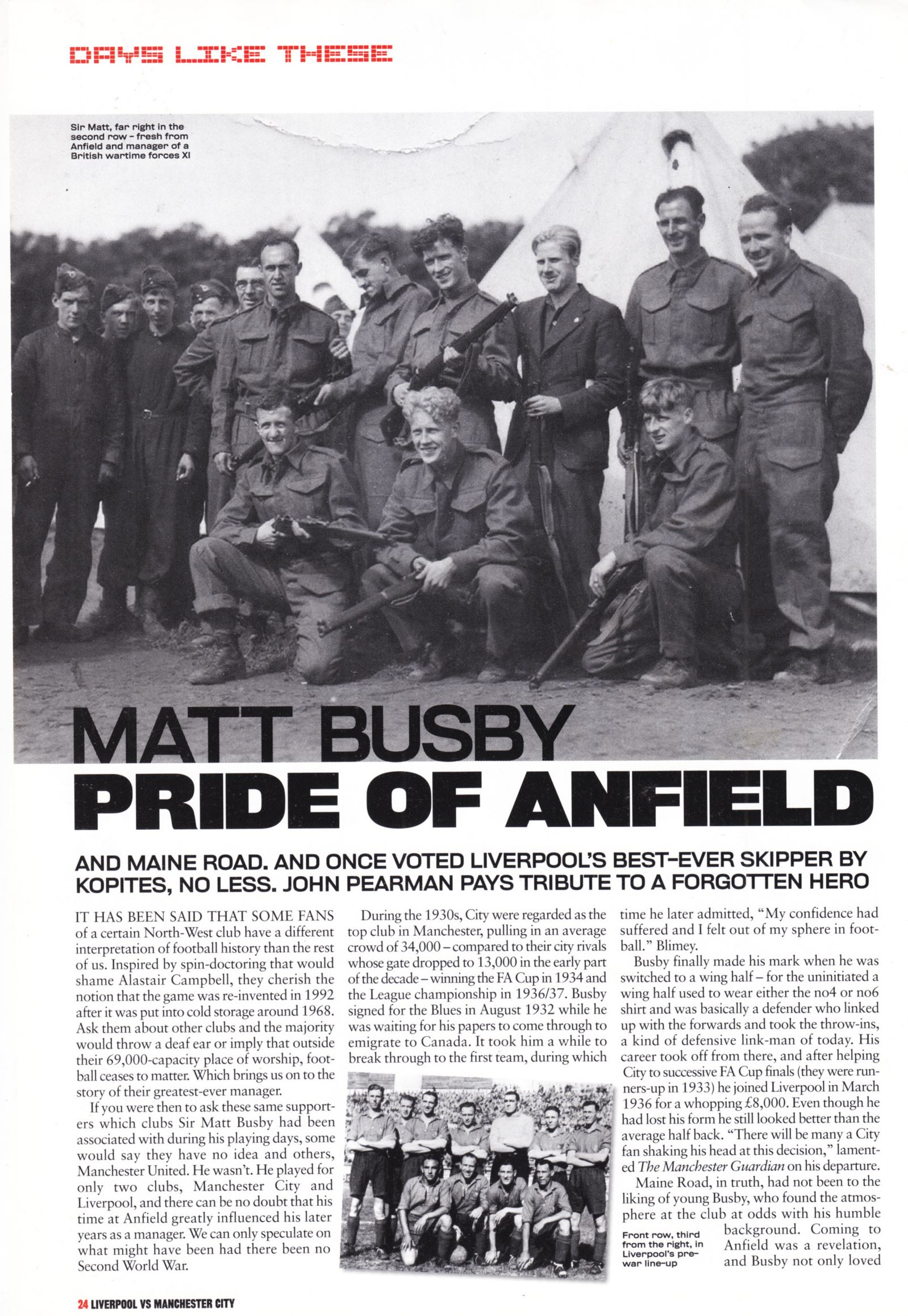 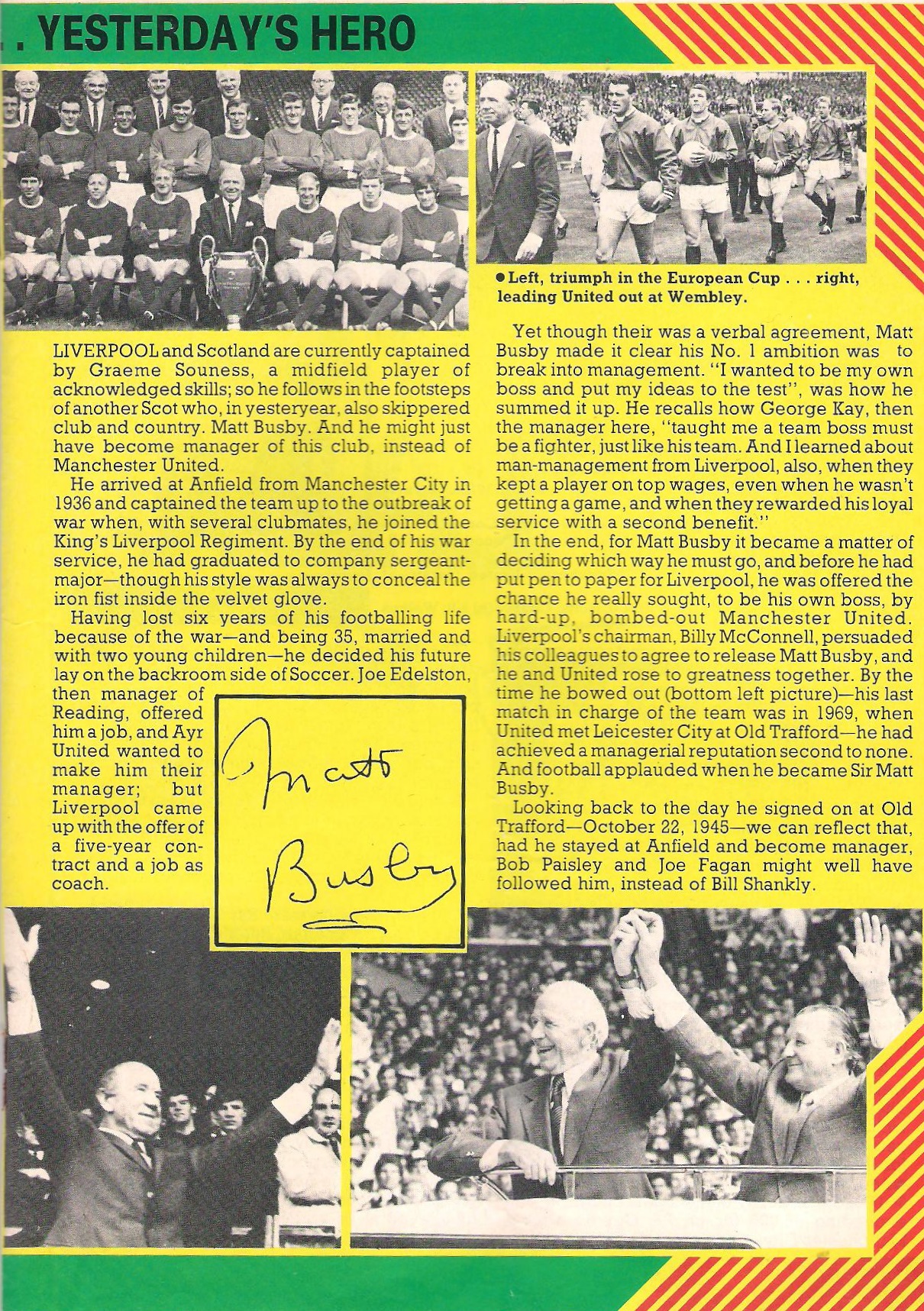