Twenty-four-year-old Johnson was already an England international having scored 46 goals in 187 League matches for Everton and Ipswich before featuring for Liverpool. The boyhood Red started his career at Everton which Johnson says came as a "great shock" to his family who was all-red. He certainly got Liverpool's attention when he scored the winning goal as a 20-year-old against the Reds at Goodison on 13 November 1971, a feat he would repeat for Liverpool at Goodison in 1978. Shankly made two enquiries for Johnson while at Everton but Harry Catterick wouldn't let him go across the park. Shankly asked for him on a couple of more occasions while Johnson's career flourished at Ipswich, usually a top-three team. When Ipswich finally caved into Liverpool's attentions it was Bob Paisley who welcomed Johnson, who didn't hesitate to put pen to paper for his boyhood idols.

Although picked from the start for the first eight first division fixtures of 1976/77, many of Johnson's 26 League appearances that year were from the substitute's bench. He had been bought as a future replacement for John Toshack, who had scored a Liverpool career-high total of 23 goals in the previous season but was now struggling with injury. Johnson was more often than not on the wing rather than up-front. Johnson still easily qualified for the first of his four League Championship medals. He scored in the final League match of the season, away to Bristol City, and that was enough to earn him a place in the FA Cup final team to meet Manchester United. He was substituted by Ian Callaghan during the final and 'Cally' kept his place for the European Cup final in Rome four days later. Johnson along with the other four substitutes had to watch Liverpool triumph from the bench. Stuck in the reserves for much of the next season, Johnson started the first leg of the European Cup semi-final against Gladbach and scored Liverpool's consolation goal in Germany. He scored the only goal at Goodison Park but when he was establishing himself he tore his knee ligaments against Leicester on 8 April 1978 and missed out again on a European Cup final.

The following season was a bit of a stop-start understandably having suffered such a bad injury but Johnson finally established himself in the second half of 1978/79. Johnson had his best season in 1979/80, scoring 27 goals and forming a powerful partnership with Dalglish. Johnson scored two goals in a 4-1 win over Aston Villa, the second consecutive year that Liverpool sealed the League Championship by beating the Villains. His form earned him further international recognition and he scored twice in a 3-1 win against world champions Argentina at Wembley in May 1980. Ian Rush's emergence in 1981 relegated Johnson to the bench but not before he finally achieved his dream by being part of the side that lifted the European Cup for the third time at the Parc des Princes in 1981. Johnson re-signed for his first club Everton in August 1982 where he stayed for a couple of years before going down the League ladder. He also sampled life in USA and Malta.

David Johnson was known as the Doc as he used to suffer from a sore throat so he always kept cough sweets in his bag along with headache tablets: "Everyone used to go to my bag to use my gear," Johnson explained. "Terry Mac went in there one time and took out all these pills and stuff and said: 'It's like a flippin' doctor's bag and after that, it just stuck."

I lived the dream with derby winners for Liverpool and Everton

Most Liverpool fans have a story to tell about one away game or another - mine comes from right at the very start of the 1983-84 season.

"It was the most satisfying night of my European career. It meant so much to be after being on the bench in '77 and on crutches in '78. This time I actually played, and for the whole 90 minutes too."

David Johnson on the European Cup final in 1981

"That was thanks to Terry Mac. In those days a dressing room was a dressing room, there wasn't all the mod cons that are there now, so you took your own bag in there with all your own shaving gear, shampoo, hair brush and stuff like that. Well I always used to suffer from a sore throat, so there was usually strepsils or tunes or some sort of potion in my bag, and everyone used to go to my bag to use my gear - no-one ever brought their own, they just used to use mine - and Terry Mac went in there one time and took out all these pills and stuff, and said "it's like a flipping doctors bag' or words to that effect" he laughs - no doubt at the mere suggestion of Terry Mac using the word 'flipping' - "and after that it just stuck. Even Joe Fagan and Ronnie Moran took the mickey, and if we were travelling away anywhere they'd always give me all the headache tablets and things and if anyone had anything wrong with them they'd always come to me."

David Johnson on his nickname - Doc 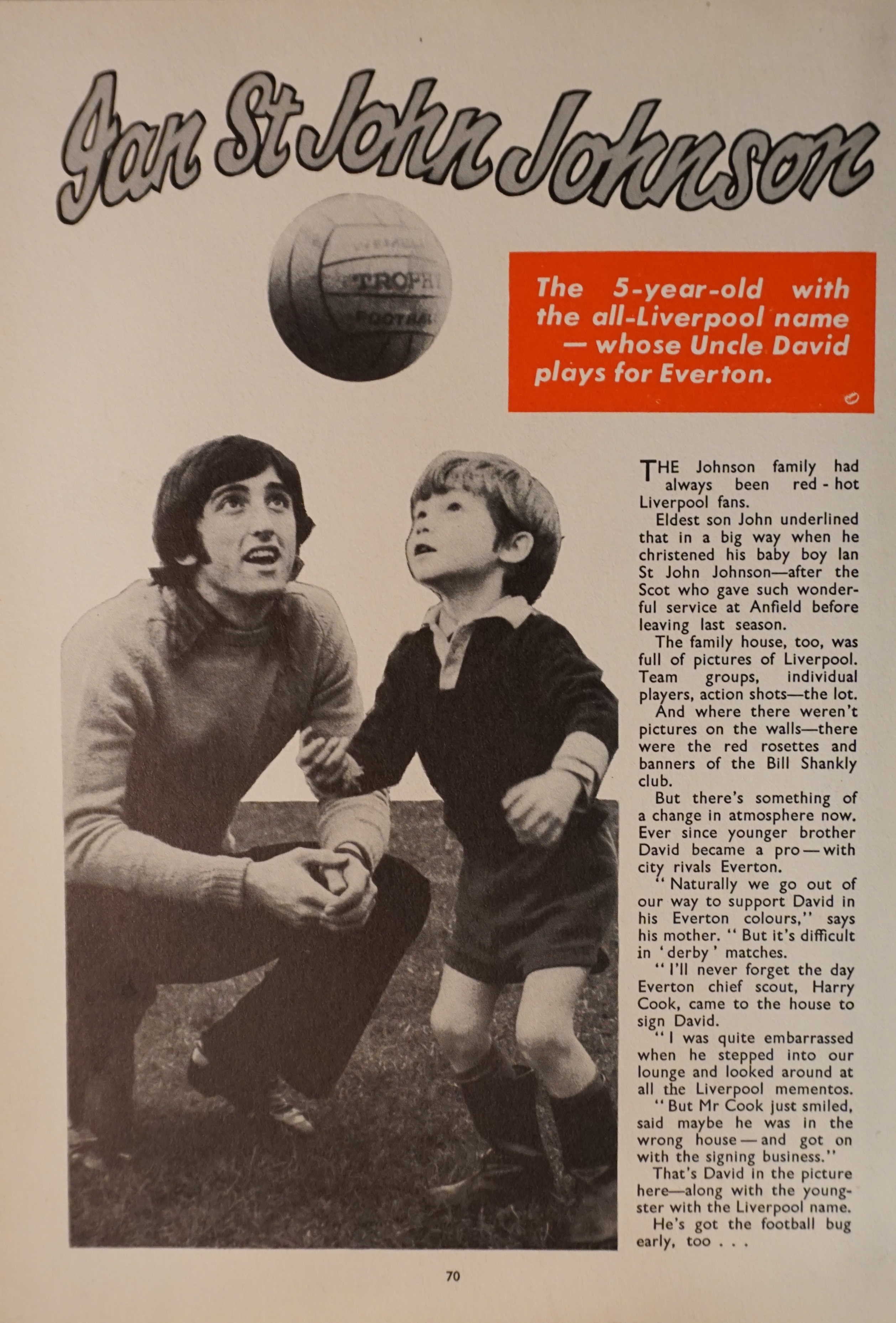 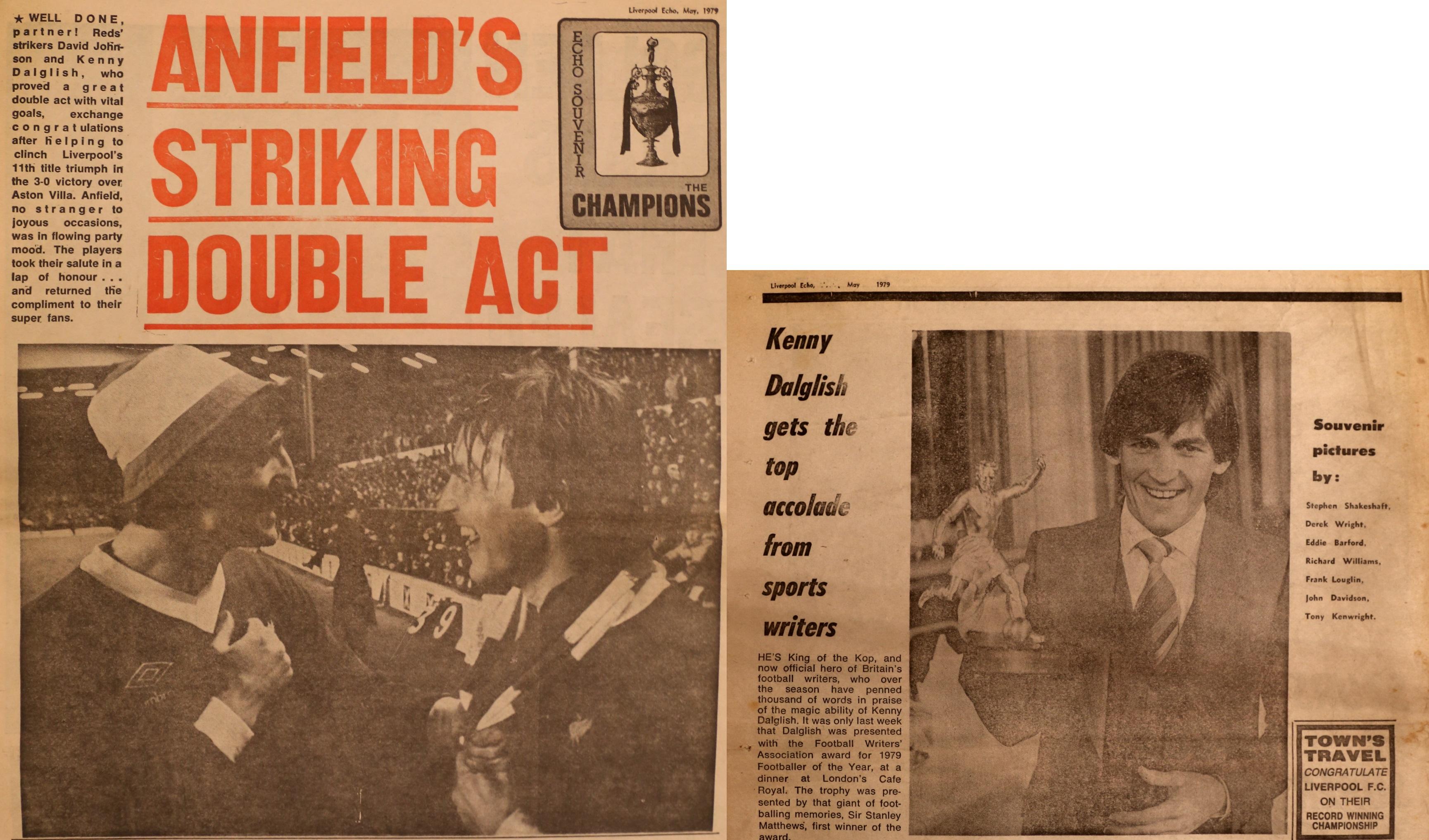 Another Johnson first setlles it - 13 November 1971 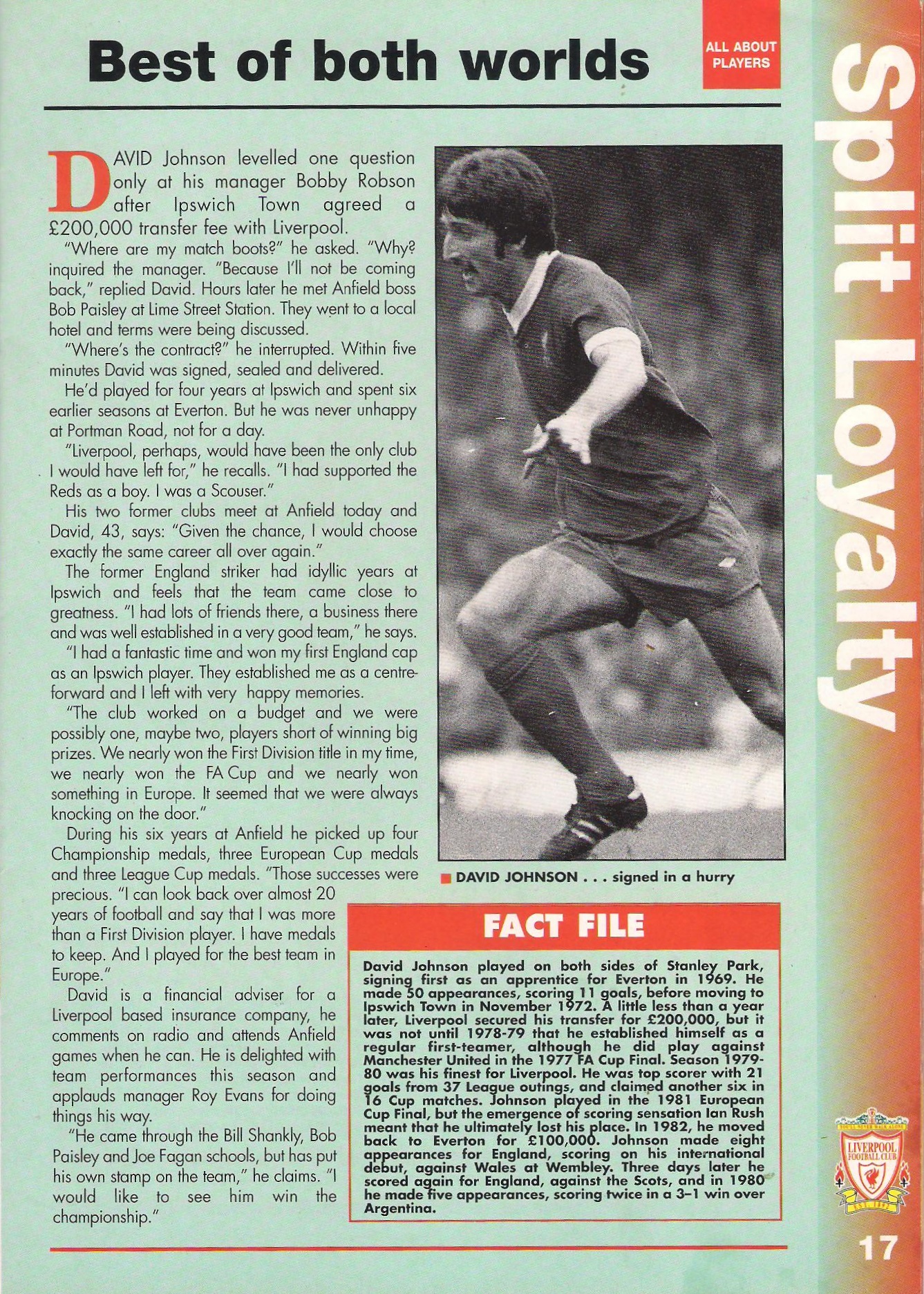 Best of both worlds - LFC match programme in 1994 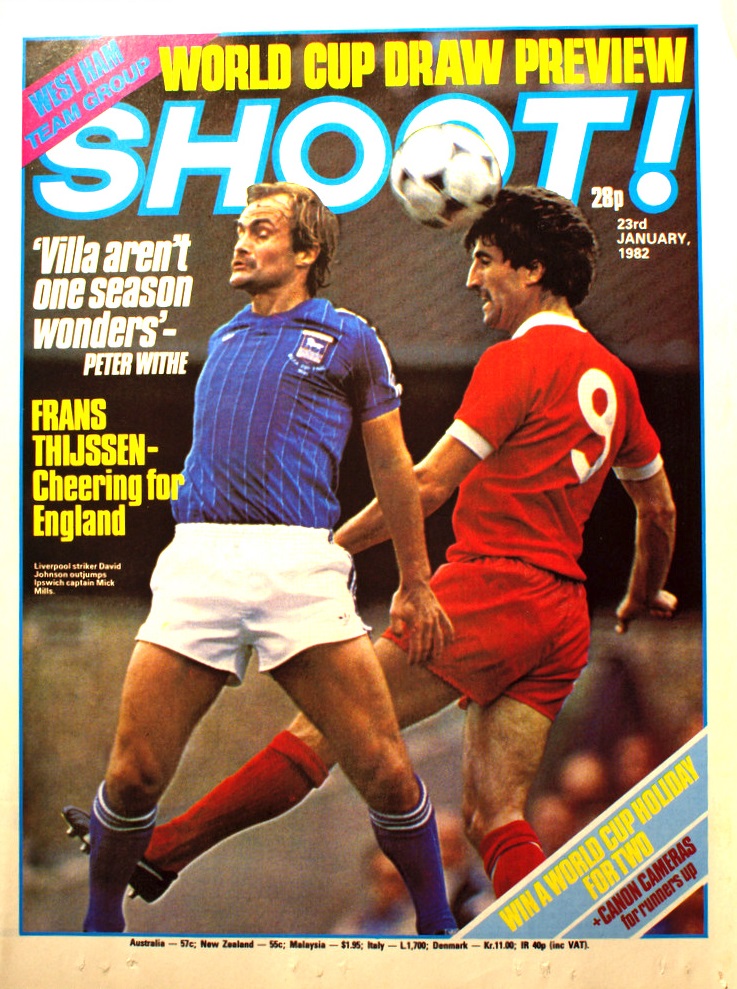 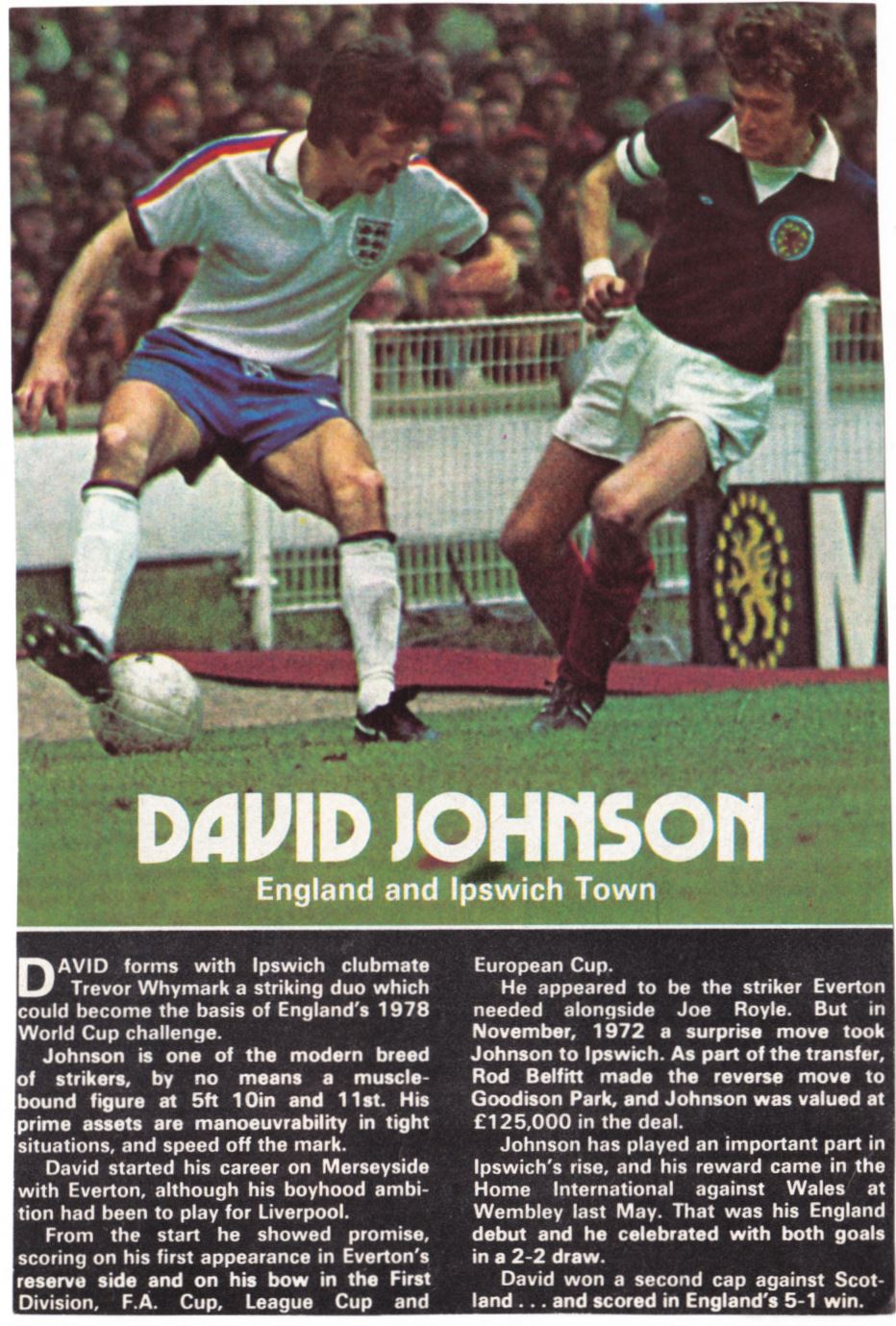 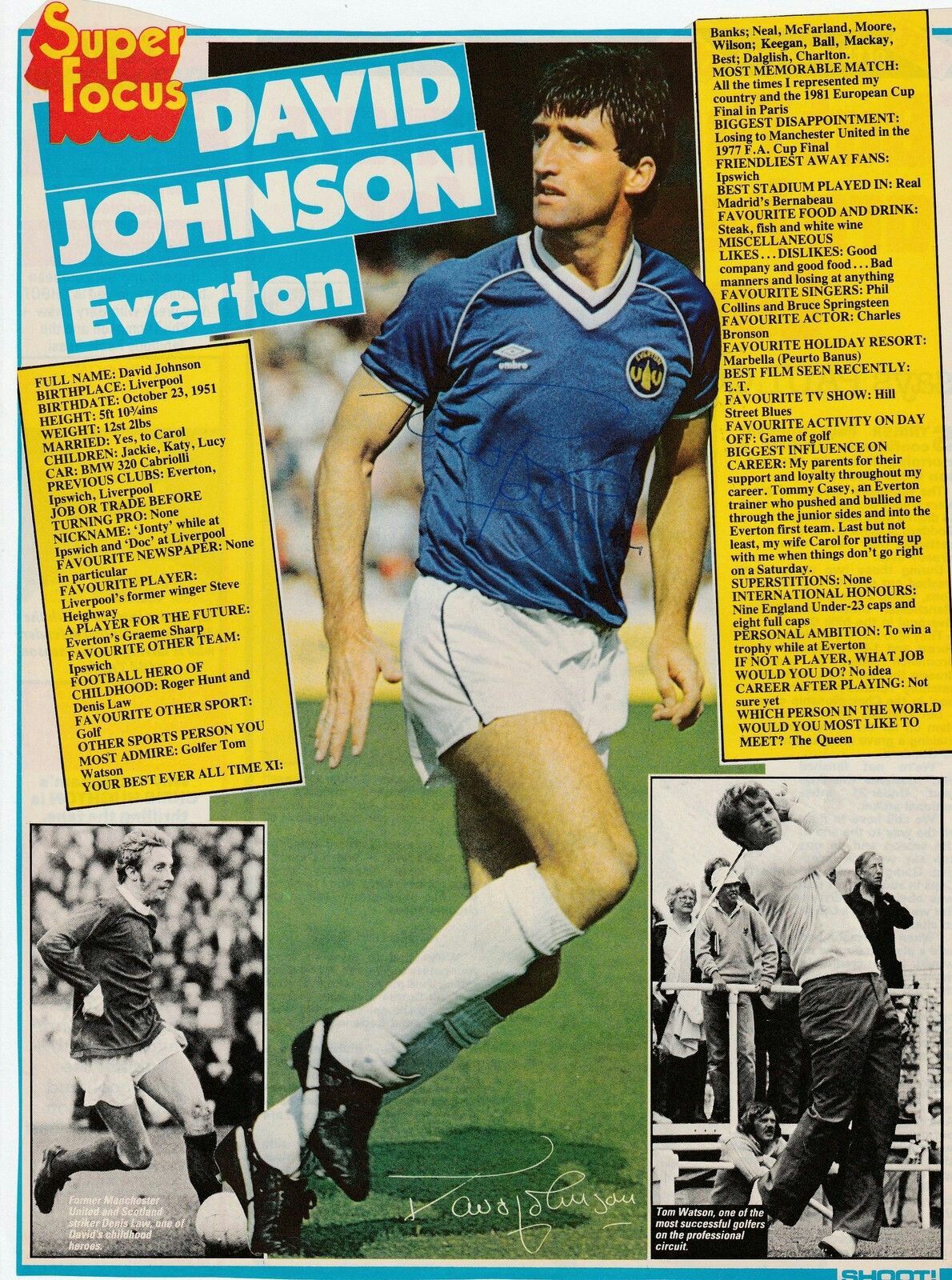 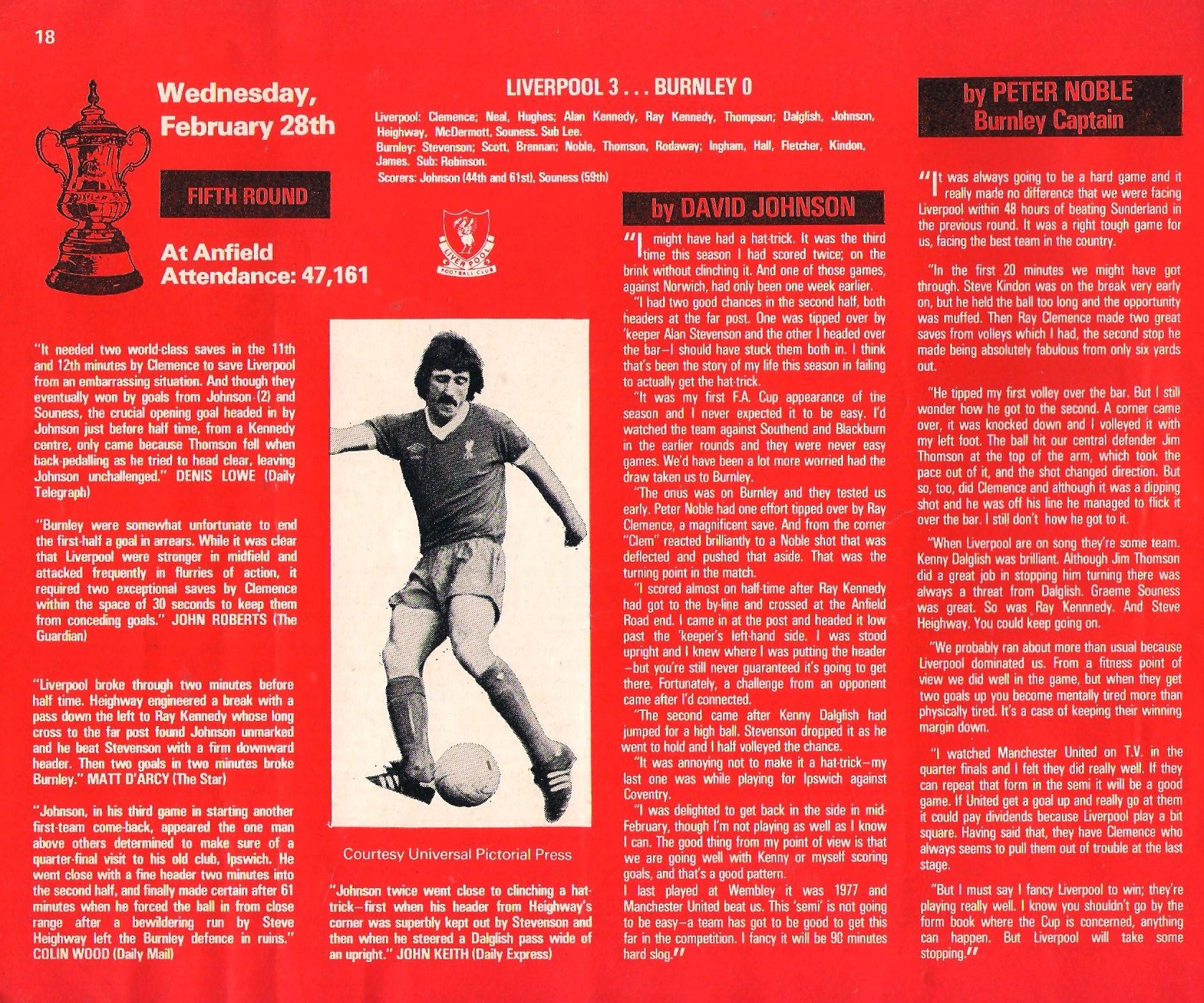 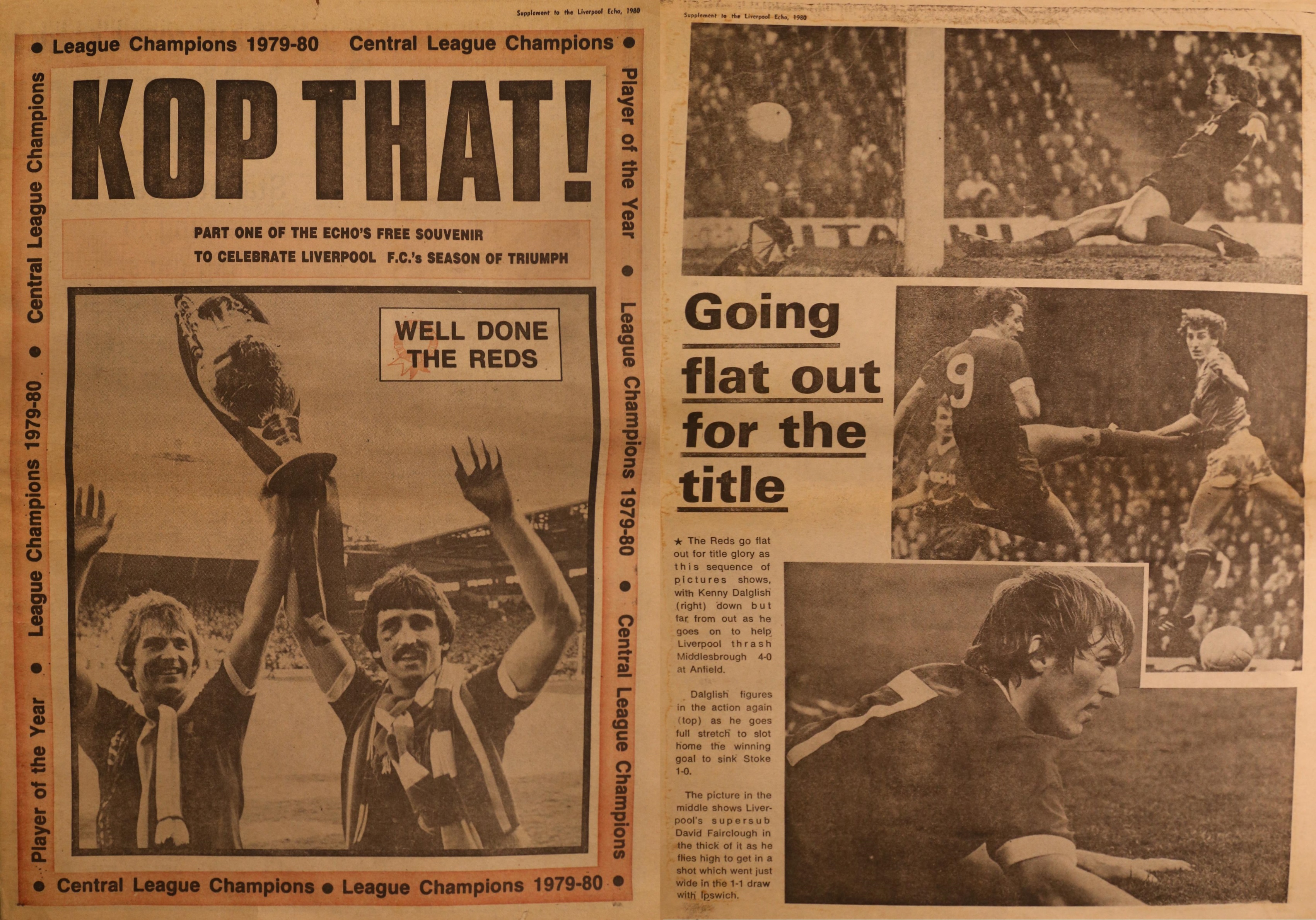 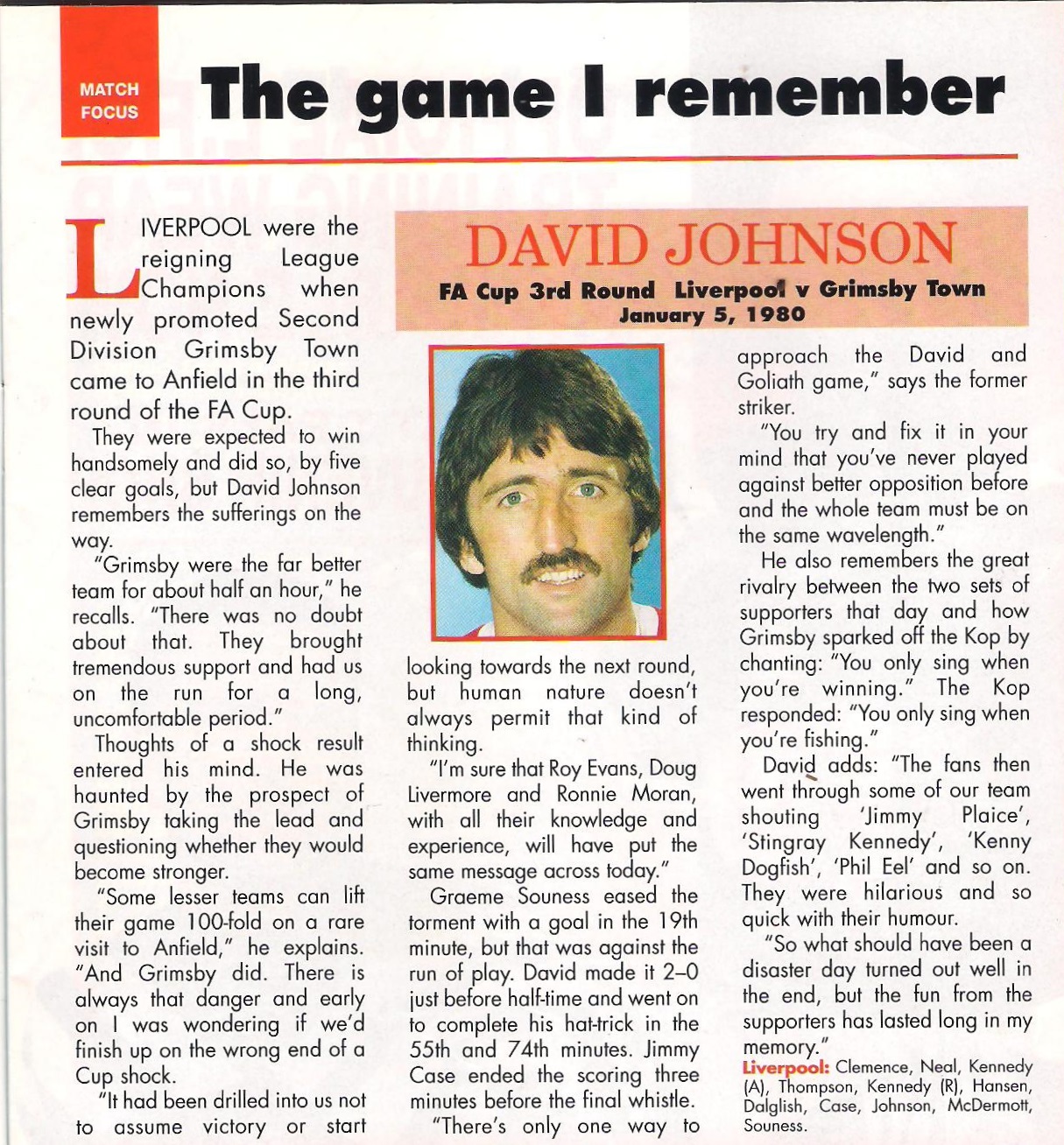 Johnson recollects a game against Grimsby on 5 January 1980 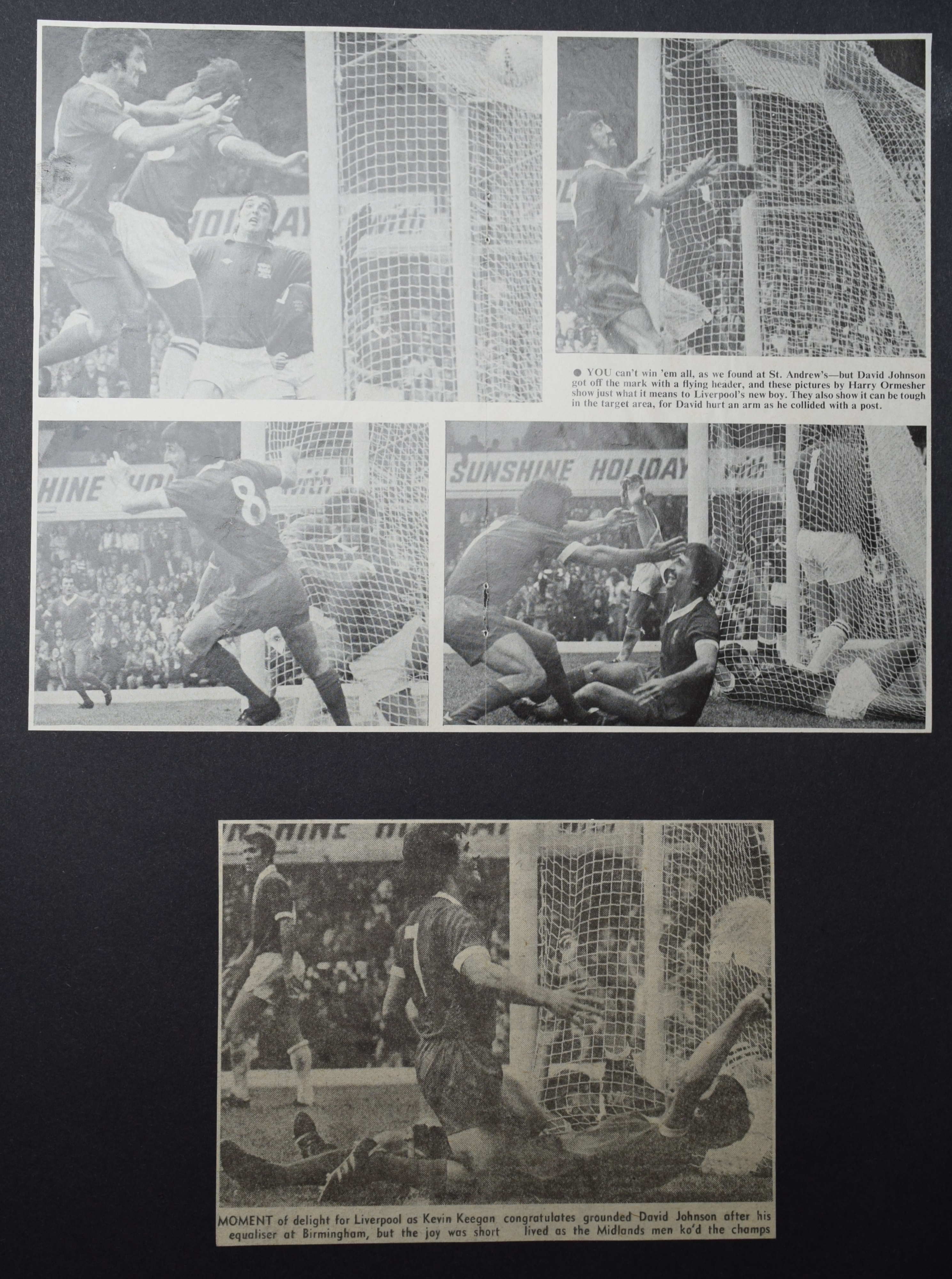 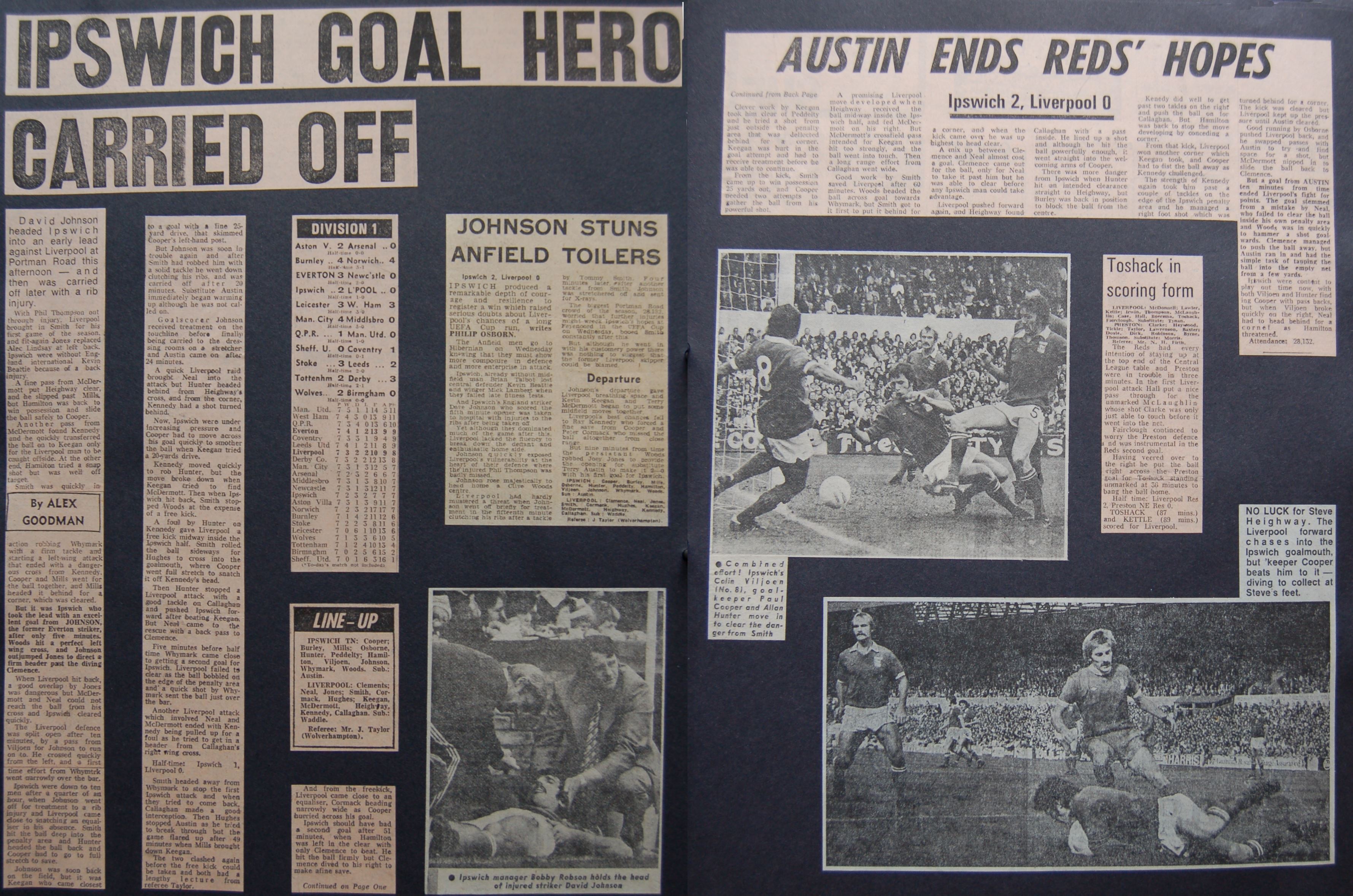 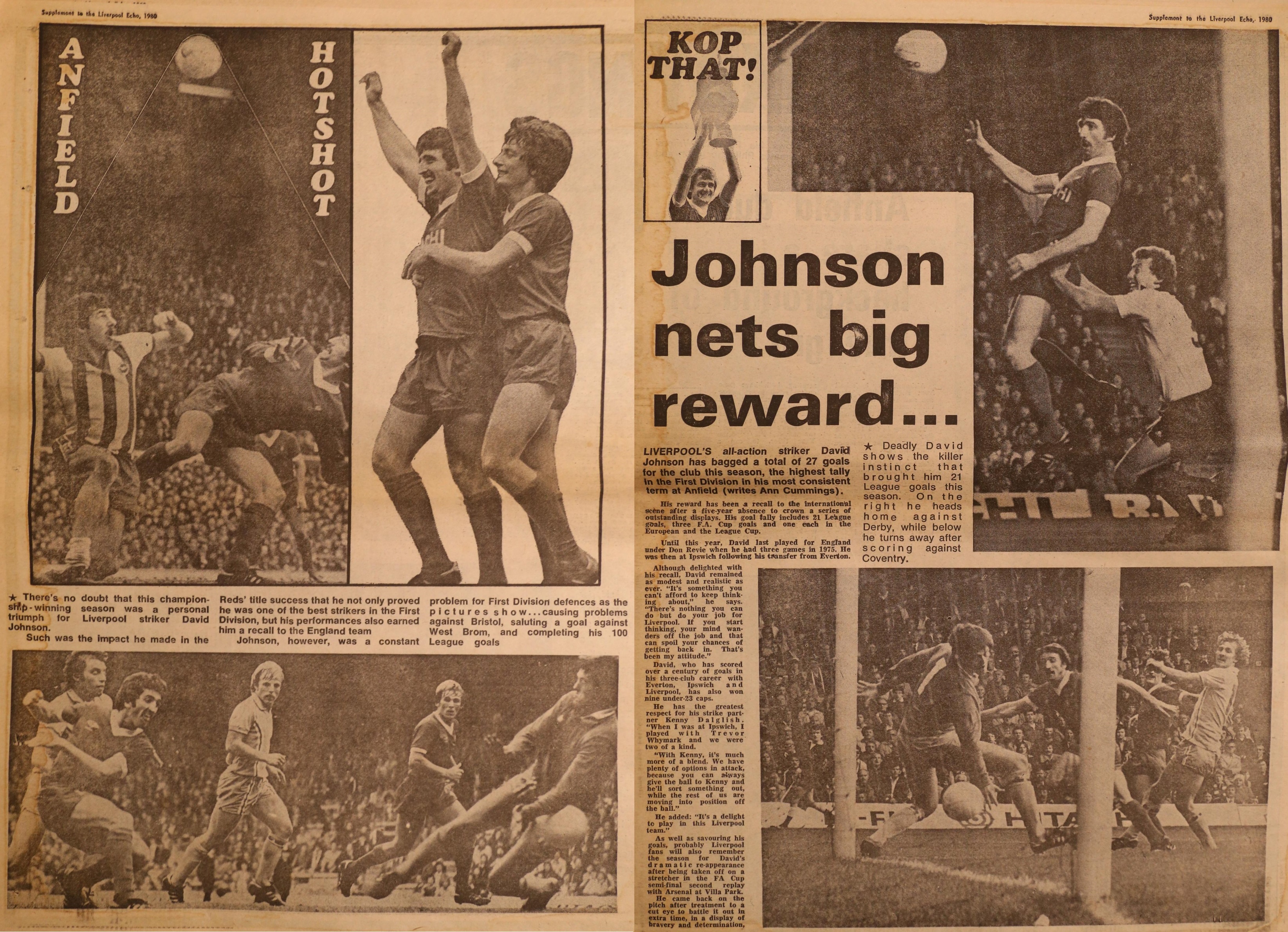 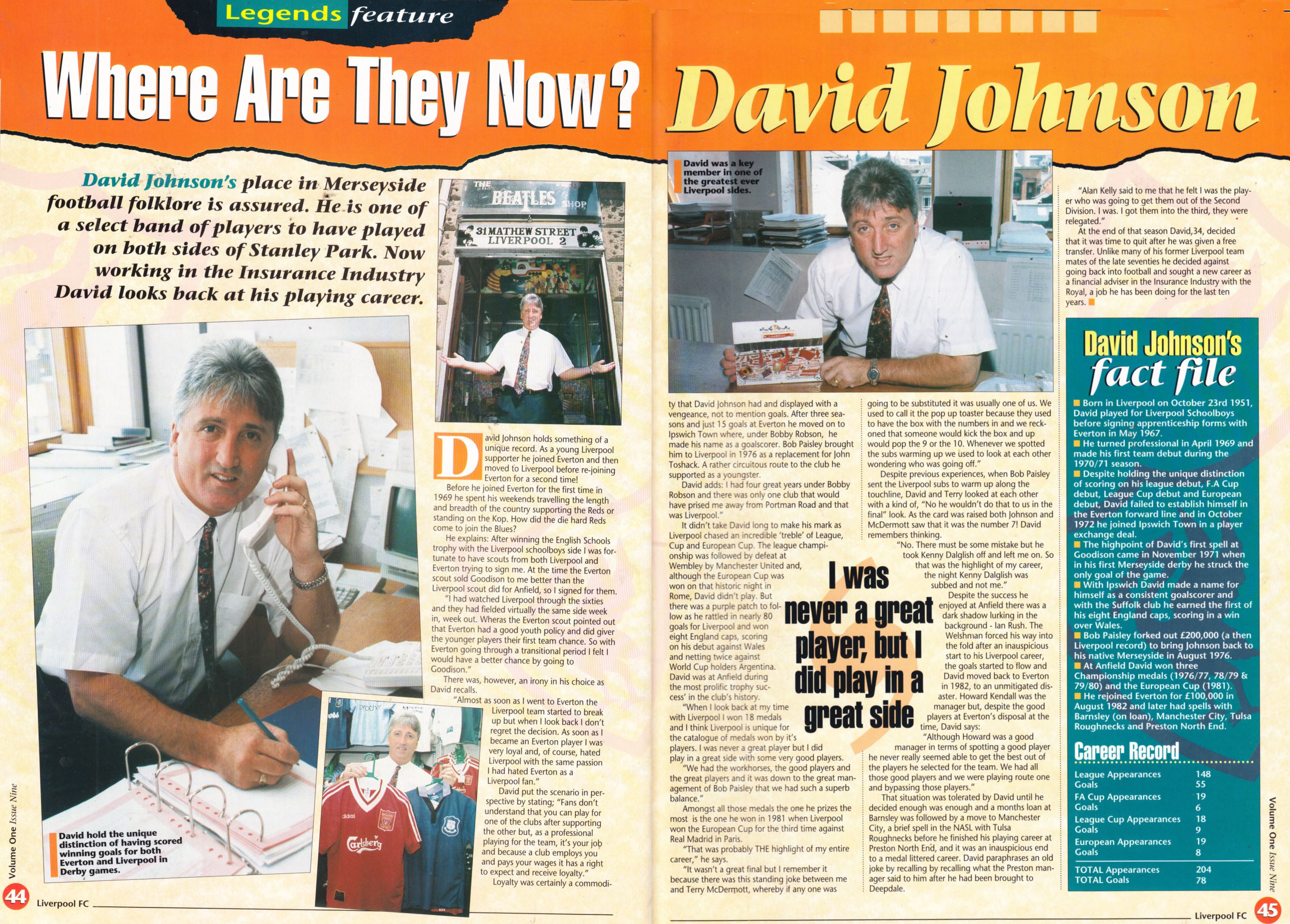 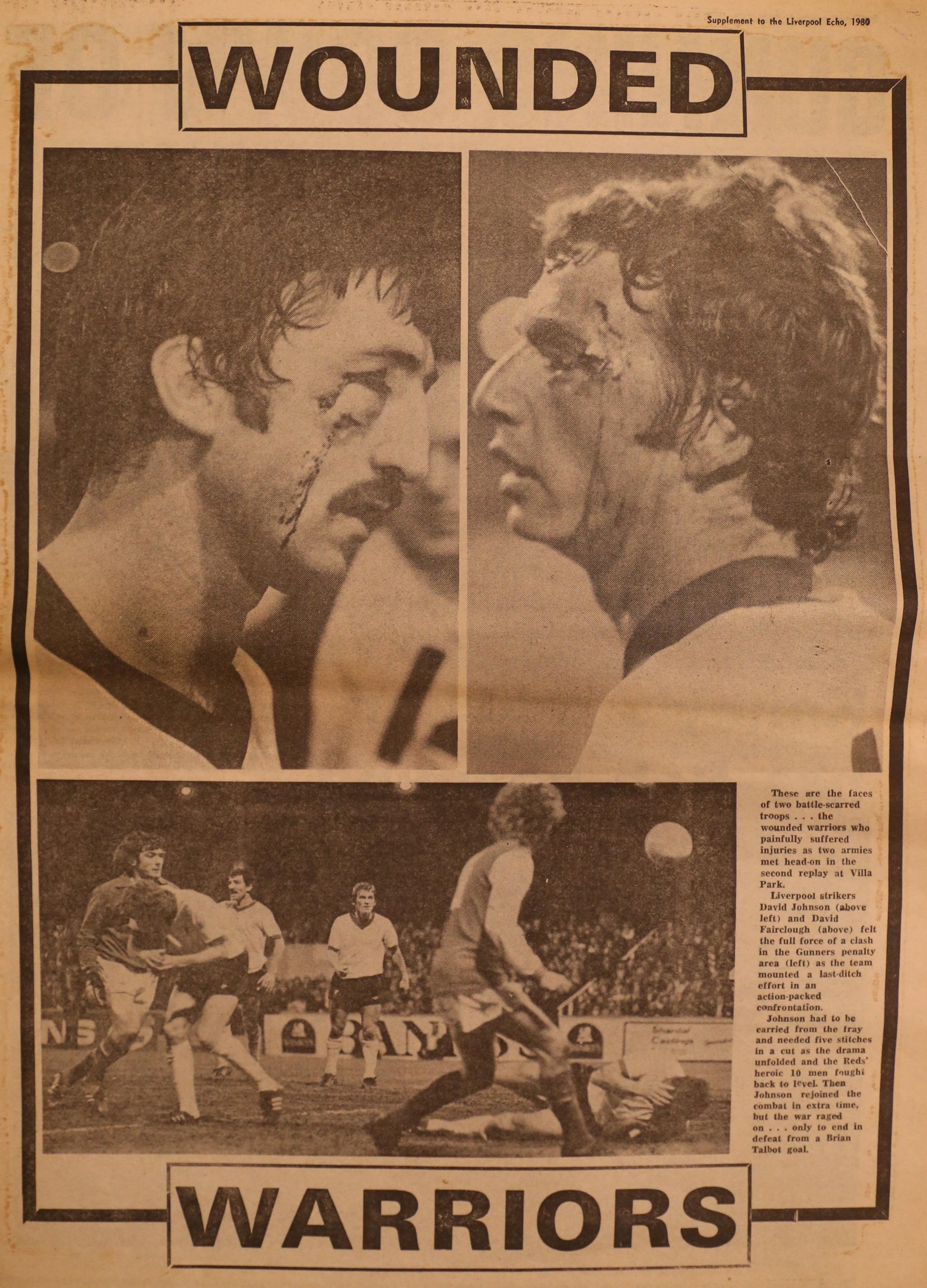