Ince played his first game for West Ham in his late-teens and after 93 appearances and 12 goals for the Hammers from 1986-1989, he thought it was time to move when the club was relegated in the 1988/89 season. His pace, stamina, tackling (once claiming: "I love tackling, it's better than sex!") and good passing ability was admired by many teams. His £1 million move to Manchester United infuriated West Ham fans as Ince had been photographed in a United kit before the transfer was complete. He explained what had happened to Four Four Two magazine: "I spoke to Alex Ferguson and the deal was close to being done," Ince said. "I then went on holiday, and my agent at the time, Ambrose Mendy, said it wasn't worth me coming back to do a picture in a United shirt when the deal was completed, so I should do one before I left, and it would be released when the deal was announced. Lawrence Luster of the Daily Star took the picture and put in the library. Soon after, their sister paper, the Daily Express, were looking for a picture of me playing for West Ham, and found the one of me in the United shirt in the pile. They published it and all hell broke loose. I came back from holiday to discover West Ham fans were going mad."

After trophy-laden years at Old Trafford where Ince won the Premier League and FA Cup twice he was transferred to Inter Milan in 1995 in a £7 million move. He made quite a name for himself with his tenacious displays in his two years in Italy where he also scored on a more regular basis than ever in England. Manchester United had first option on him if he ever decided to come back to England. When Ince wanted to go back home in 1997 as he wanted his two sons to be raised in England Alex Ferguson waived his rights to sign the self-called "Guv'nor" and Roy Evans was one happy chappy when he secured his services for Liverpool. His new captain was finally in place ready to take over the reigns from the fading John Barnes in the 1997/98 season. It surprised many to see an ex-United player join Liverpool and Ince admitted it was unusual. "It will be strange walking on to the pitch as a Liverpool player," Ince said. "Normally, when I walk out at Anfield, I get slaughtered." Only Steve McManaman and Michael Owen made more appearances than Ince's 40 in his debut season. Ince was heavily involved again in the 1998/99 season but Roy Evans' once-promising team failed to deliver. Ince's two years at Anfield can probably be considered as neither success nor failure. He had the experience and determination to do well but that was not enough to see his new employers win any silverware. Undoubtedly Ince's sweetest moment in a Liverpool shirt was when he equalised to make it 2-2 in the eighty-ninth minute at Anfield after the Reds had been 2-0 down against Manchester United. Stung by their refusal to re-sign him when he returned from Italy and also hearing the abuse directed at him by United's supporters all throughout the match Ince certainly enjoyed denying United the win and potentially damaging their championship hopes.

Ince's relationship with new manager Gerard Houllier turned sour and he left for Middlesbrough in 1999. He let Phil Thompson and Houllier know in no uncertain terms what he thought of the pair in an interview with the Sunday People following his move. ''I want Houllier to get the sack and take Thompson down with him. If they think people are no longer any use to them they treat those people like dirt," fumed Ince. ''It's disgraceful the way Houllier has treated me and other players at the club. He comes from France and I can't even believe he's managed a team before because he certainly doesn't seem to know how to. It's okay coming out with all this technical stuff about the game but when it comes to managing players off the field as people he certainly doesn't seem to know how to.'' Ince admitted he wanted to cause Houllier physical harm when he announced to him that he wanted him out of the club. ''I thought to myself 'I can't believe I'm hearing this'. And I said to him: 'You've had months to tell me but you decided you were going to do it just before pre-season. I can't believe this - it's total c**p!' I just wanted to punch Houllier in the face. If I was younger I would have. He would have deserved it.'' Steve McMahon jumped to the defence of Houllier and Thompson after Paul Ince's outspoken attack: "Ince should keep his mouth shut and get on with his new job of playing for Boro. Criticising Gerard Houllier was a bad thing for him to go and do. Someone of his experience should know better. It is players like Ince who have got Liverpool into trouble in the first place. Gerard has had a hard job to do at Anfield taking over a poor team and trying to rebuild it. He was right to get rid of Ince and get in Dietmar Hamann."

Ince was captain of Bryan Robson's Middlesbrough for three years in the Premier League and also featured one season with Wolves in the top-flight after promotion in his debut season at Molineux. Ince finished his playing career at Swindon Town, where he was player-coach, and Macclesfield Town, the latter also being the club that gave him his first step on the managerial ladder. In June 2007 Paul Ince was appointed manager of the rapidly-improving Milton Keynes Dons and under his leadership the Dons won the League Two championship as well as the Football League trophy at Wembley. On 22 June 2008 Ince's dream of managing in the Premiership came true at Blackburn Rovers. It was possibly the right club but at the wrong time. He lasted less than six months before being dismissed a few days before Christmas following a truly appalling run of bad results. Ultimately, it wasn't 'another club' that came looking for Ince; it was 'the same club', Milton Keynes Dons, in the summer of 2009. Their manager Roberto di Matteo had been lured away by West Bromwich Albion. Chairman Peter Winkelman's desire that Paul Ince should "build on the momentum he helped create" was very admirable even though it was only a few months after Ince had shown himself incapable of successfully managing a club in a division that was two rungs higher than League One's MK Dons. Although Ince had agreed a two-year deal on his return he left at the end of the first year because of budget cutbacks. On 28 October 2010 Ince returned to football management by signing a three-year deal with League One club Notts County. After five successive League defeats, Ince was sacked in April 2011.

After nearly two years out of active involvement in the game, Paul Ince was appointed to succeed Ian Holloway as manager of Blackpool on 18 February 2013. Fourteen Championship matches remained at the time of his appointment, of which his team won four, drew seven and lost three. Blackpool finished in fifteenth place, a few points above the three relegation places but also well behind the four play-off places.

ince was sacked as Blackpool manager on 21 January 2014 with the Lancashire club lying in 14th place in The Championship, having won only eight of its twenty-six matches in the 2013/14 season.

From the archive - handbags for Ince and Gerrard

Ferguson: my regrets over Ince feud

Match report from Press Association on Liverpool - Blackburn on 29.11.1998.

Match report from Press Association on Valencia - Liverpool on 03.11.1998.

Paul Ince is less than complimentary on Liverpool's management duo. From Sunday People on 1st of August 1999.

Match report from Press Association on Wimbledon - Liverpool on 09.09.1997.

"I thought to myself 'I can't believe I'm hearing this'. And I said to him: 'You've had months to tell me but you decided you were going to do it just before pre-season. I can't believe this - it's total crap! I just wanted to punch Houllier in the face. If I was younger I would have. He would have deserved it."

Ince wasn't happy when Houllier told him to leave Liverpool

"I love tackling, it's better than sex!"

"Ince should keep his mouth shut and get on with his new job of playing for Boro. Criticising Gerard Houllier was a bad thing for him to go and do. Someone of his experience should know better. It is players like Ince who have got Liverpool into trouble in the first place. Gerard has had a hard job to do at Anfield taking over a poor team and trying to rebuild it. He was right to get rid of Ince and get in Dietmar Hamann." 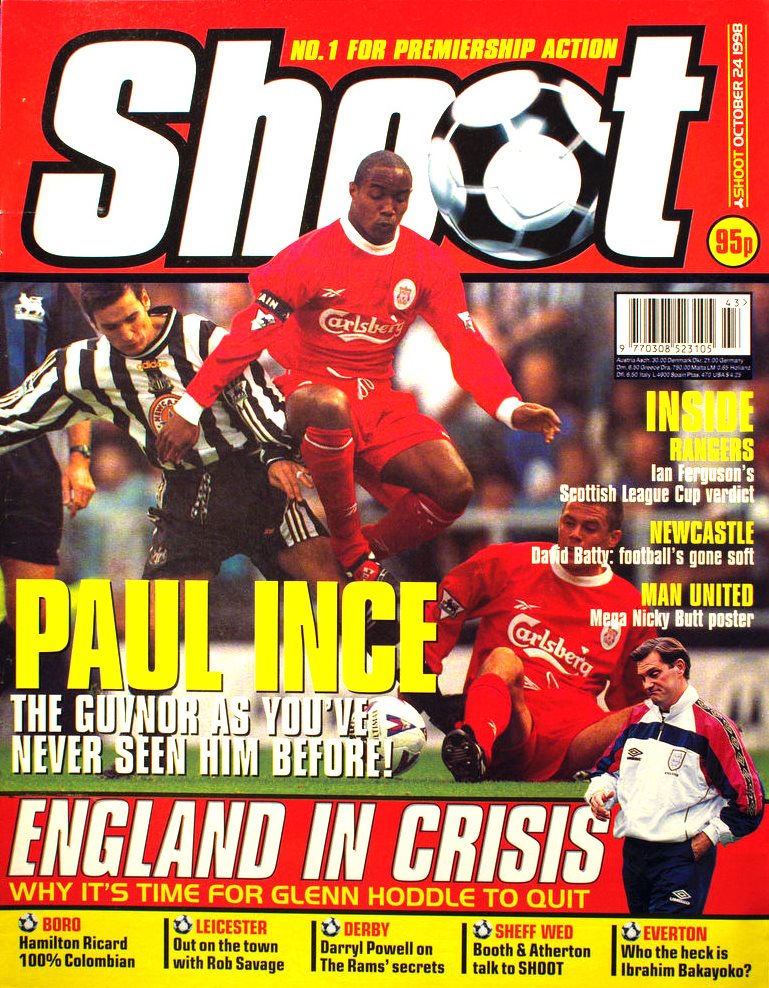 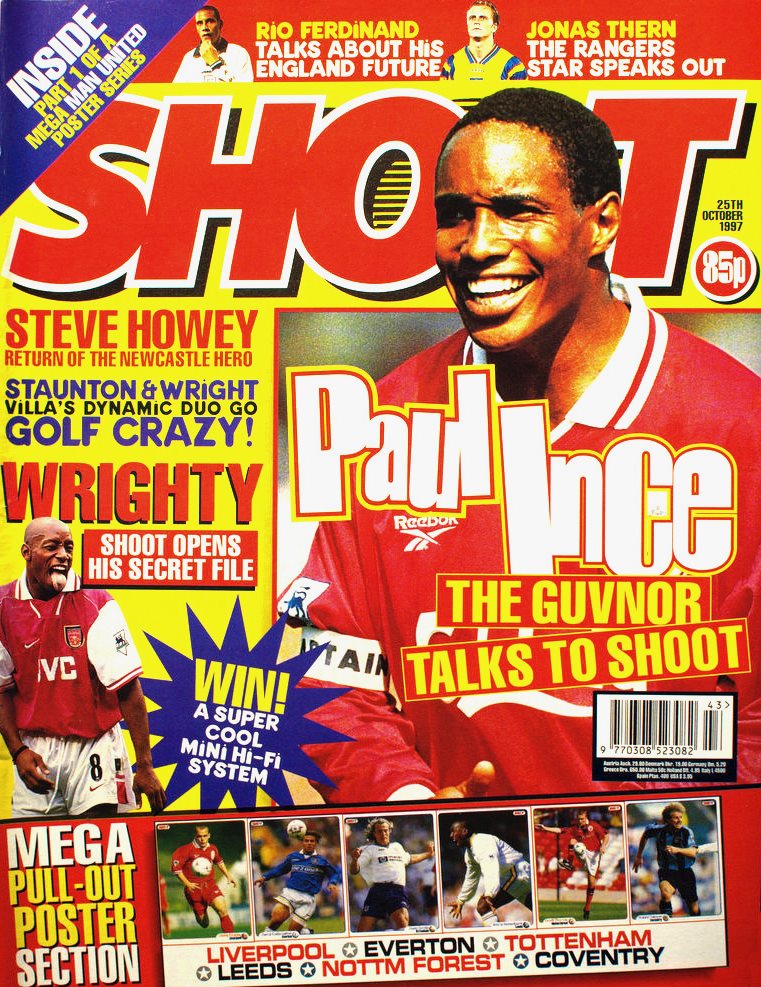