Furnell had made just three first-team appearances in eight seasons at one of the best teams in the first division, Burnley, when Everton wanted to purchase him but he declined their offer. Consequently he was dropped into Burnley's A team but while still regretting his decision Shankly made his interest known. Furnell didn't hesitate this time and the 24-year-old moved to Liverpool to help the club to secure promotion to the First Division. Bert Slater was dropped following 96 consecutive games in the first team and Furnell played the last 13 games of the 1961/62 season when Liverpool were finally promoted after being stuck in the Second Division for eight long years. Furnell broke his finger 13 games into the 1962/63 season, thirteen, clearly, an unlucky number for him as it was the end of his Liverpool career! Furnell recalled his twist of fate in the Lancashire Telegraph in 1998: "I went down to collect the ball in a five-a-side and caught the finger on the ground. Shanks took me out of goal and made me complete the match up front. He wouldn't believe that it was broken, but Bob Paisley insisted I should go along to have it checked out by the doctors. I spent a week in hospital, needed a bone graft and didn't play again for months. Didn't realise it at the time, but it was the end for me at Anfield. That's when I saw another side to Shankly. If you were injured it was as though you stopped existing. He didn't come to visit me and more or less ignored me when I reported in at the club for daily treatment."

Twenty-two-year-old Tommy Lawrence replaced him having waited patiently for his chance for five years. Lawrence's emergence sealed Furnell's fate at Liverpool thus enabling Shankly to sell him to Arsenal in November 1963. Furnell did exceptionally well at the Gunners and played 167 games for the first division team from 1963-1968 until he made way for future legend Bob Wilson. Furnell made 76 League appearances for third division Rotherham United, before joining fellow third division team Plymouth Argyle in 1970. Initially signed as a reserve 'keeper he took the number one jersey and was voted Plymouth's Player of the Year in his first season. He had played a total of 206 games for the Pilgrims when he retired in 1976. In 2007 he was named "Argyle's Greatest Ever Keeper" in a poll on a popular website for Argyle so he clearly made a good impression at Home Park. Furnell joined the coaching staff at Plymouth and was in charge of Blackburn's reserves and youth team development from 1981-1998.

"Under Shankly it was awesome, made you understand the real meaning of fanatical," Furnell told the Lancashire Telegraph. "There's never been an atmosphere to compare with Anfield. We used to get goosebumps running out there, heaven knows what opponents must have felt like. Being in goal in front of 15,000 on the Kop made you feel unbeatable. Tommy Lawrence came up from the reserves to take my place and the team just went from strength to strength. It was the start of the Liverpool domination - two championships in three years, the European Cup, the FA Cup. You name it, they won it and, but for the injury, the person wearing the green jersey and picking up the medals would probably have been me. That's fate, that's football and that's life.“

Interview with Jim Furnell on his Liverpool days under Shankly, published 31 January 1998.

A press article from Liverpool Echo and Daily Express on the 18th of April 1964. 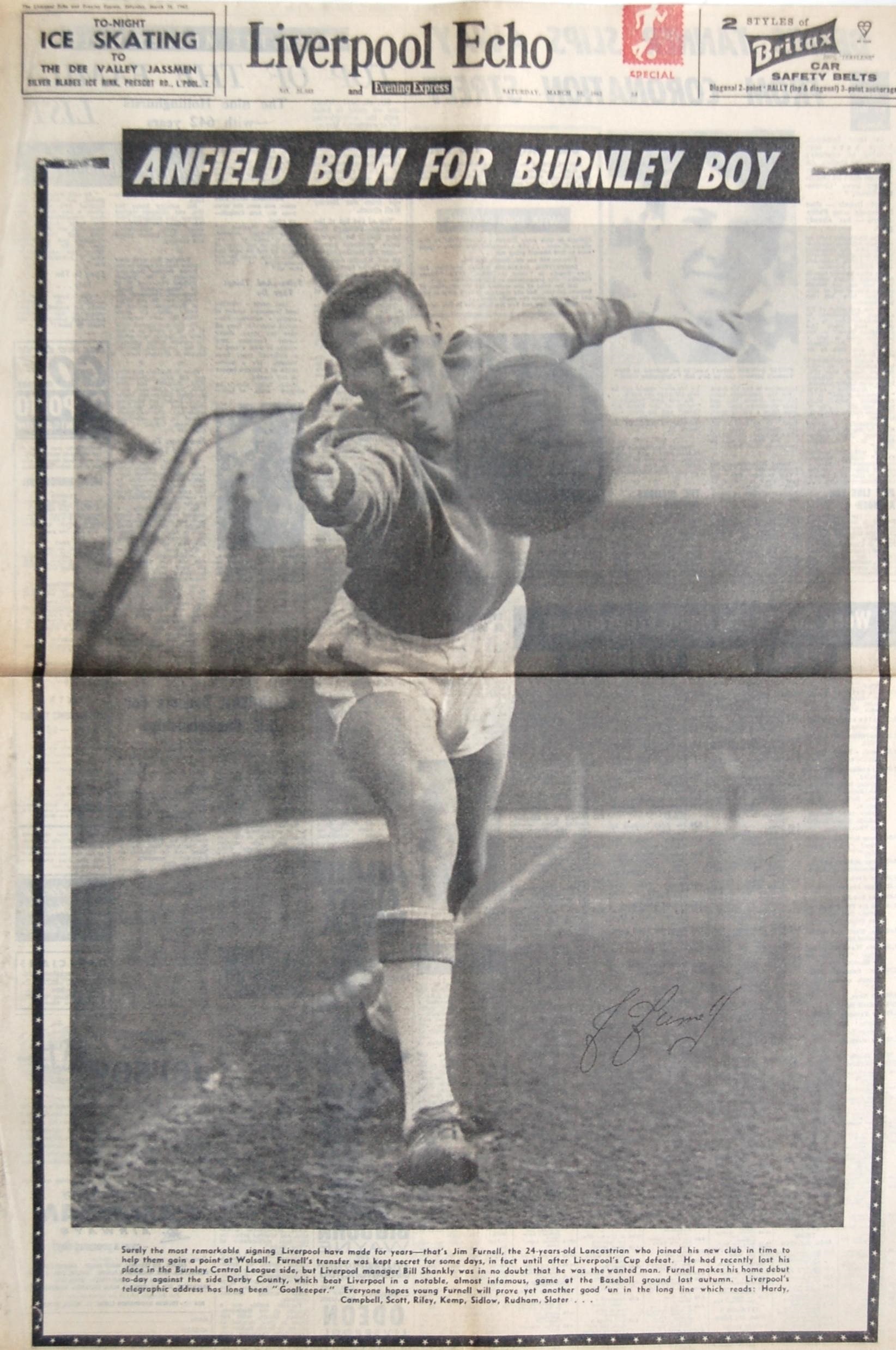 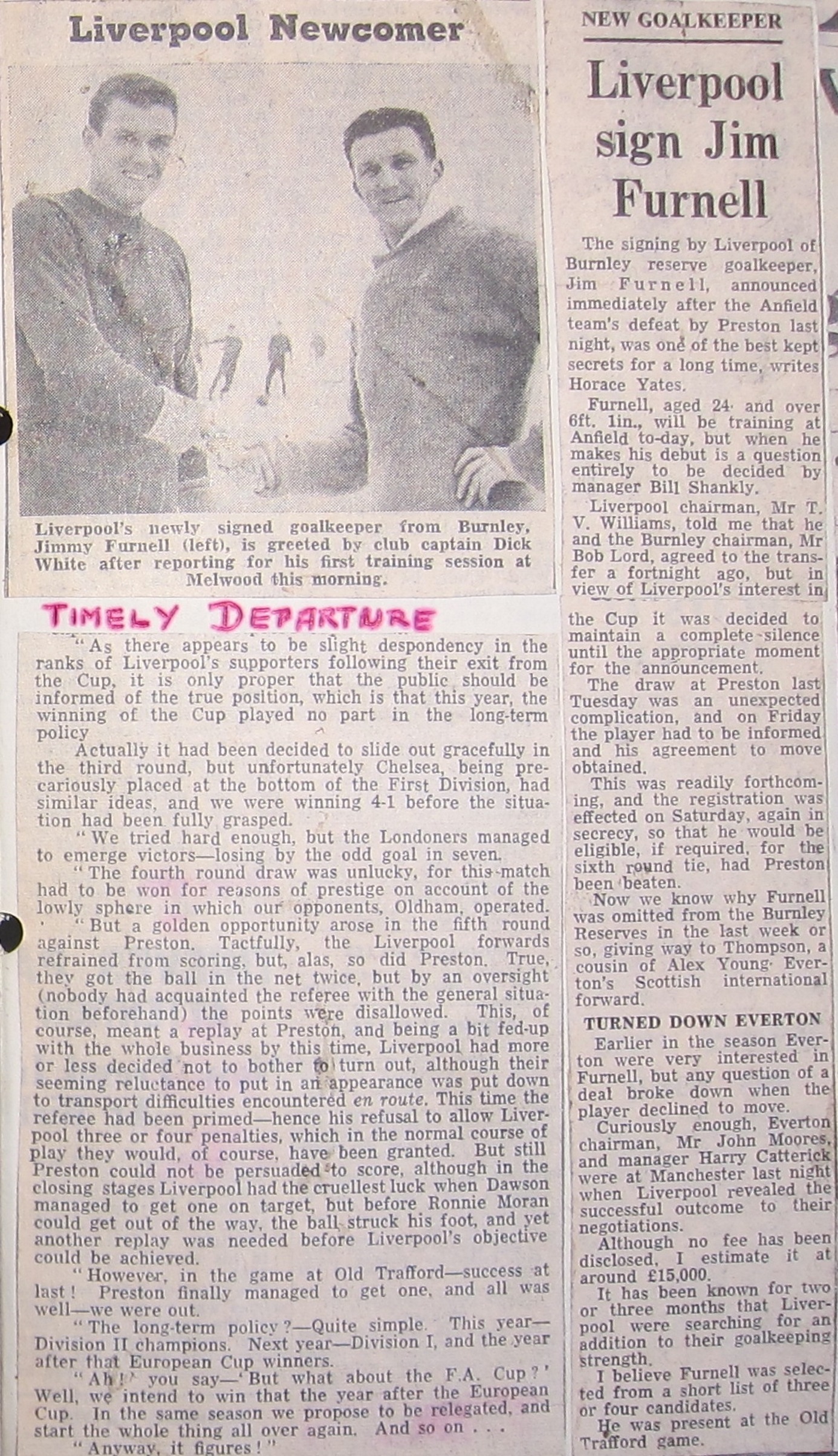