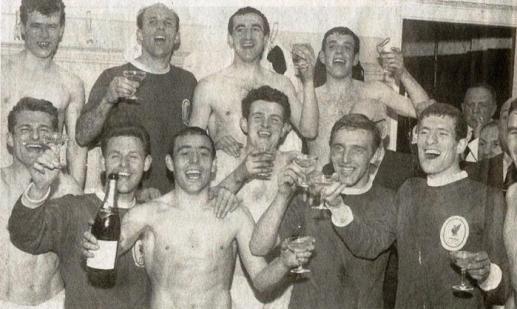 An hour before kick-off all gates were closed and there was scarcely a soul in the streets outside, this presumably being due to the fact that countless thousands must have taken the view that unless you were at Anfield by half-past one this great day you had of chance of finding a place on the terraces.

Roger Hunt had difficulty in getting through the crowds soon after mid-day to have his fitness test, but all was well and appropriately he was able to take his place in this final home game on which so much depended.

Furnell won the toss and chose to defend the Kop goal. Was it singular that only a solitary photographer took up station alongside the goal occupied by Lawrence? Ure headed away a strong high centre by Stevenson in the first minute, and then Moran making a blunder with a pass-back to Lawrence, all but let in Skirton. Fortunately the goalkeeper was out to the Arsenal player's feet to grasp the ball when it seemed long odds on him rounding Lawrence and getting a goal in the opening 60 seconds.

Hunt headed over from a Callaghan centre after Snedden had made the mistake to give the winger possession and go on almost unopposed. Lawrence picked up a low dangerous centre  from Armstrong who had rounded Byrne, so one way or another the match had got off to a cracking start for incident.

Liverpool went ahead amid a great scene of enthusiasm at six minutes. Hunt came through at inside right avoiding a scything tackle by Skirton and turned the ball into Arrowsmith, who edged it across to St. John, coming in fast, and able to to slide it beyond the outcoming Furnell for what in view of its importance was the goal of the season.

Within the next minute Arsenal could conceivably have been level. Again there was shakiness in the defence and this time Baker had possession with Lawrence out of goal and turned in a left foot shot, but so slowly that Byrne, having dropped back, had no difficulty in side-footing the ball to the waiting hands of the returning goalkeeper. Furnell was having plenty to do, he now judged the flight of a curling left foot shot by Callaghan perfectly, and that was the end of that moment of danger.

Young Arrowsmith now came along with a rasping shot from 25 yards, and Furnell must have been glad to hear the thump of the ball against the behind-goal concrete. If anything Arsenal had the handicap of playing against the wind and long-distance high balls which Liverpool put up frequently at this point, caused them a great deal of embarrassment. Arsenal were settling down to try and make a first-class exhibition of it and there was never any doubt that Baker was always a menace, but it was Armstrong at this moment, with a late swerving shot, not hit too hard, who was the Arsenal striker, and Lawrence did well to be alive to the situation.

Magill was guilty of a foul just outside the box near the goal line when Hunt became left winger, but then Furnell brought the house down with a tremendous save from a volley by Arrowsmith who had received from Callaghan. Milne cut into an Arsenal move to come through as though ready to make it 2-0, but his half-hit shot was easily picked up. After being very much underdogs Arsenal were now getting a reasonable grip on the game, moving the ball around accurately, and to some purpose against a Liverpool defence which seemed a bit non-plussed for the moment.

At 29 minutes Arsenal got a penalty when Eastham, threading his way through at inside right, flicked the ball up with his head, and Yeats, finding he was going to be beaten, handed palpably. Not a soul protested at the justice of the penalty decision. Eastham chose to take it, and after having a word or two with the referee, lashed in a left foot shot aimed just inside Lawrence's right hand post. The Scot brought off an outstanding save at the post edging the ball for a corner and sending the Anfield crowd wild with joy. All the Liverpool players came downfield to give their goalkeeper congratulations.

When Hunt hooked the ball from the feet of Ure and pivoted before shooting, a goal seemed likely, but Furnell had got the situation covered to the last shooting degree and saved splendidly.

AND THEN THERE WAS TWO

The first stoppage was for treatment to Ure who received a severe blow from the ball. Liverpool got a second goal at 38 minutes. This was started at Thompson, who was given possession by Arrowsmith after McCulloch had initially had make a mistake on the other flank to put Liverpool in possession. Thompson weaved his way this way and that, passed two opponents and then floated the ball beyond the far post to where it seemed St John must score as he pleased with a header, but in the event the nod from the centre forward was so wide of goal that Arrowsmith, standing two or three yards out, was able to turn its direction with a second header and beat Furnell all ends up.

Arrowsmith failed with an excellent effort to back-heel a first-rate opening for St. John, and one way and another the young Liverpool newcomer had roamed to good purpose in this hectic first-half. When Callaghan lay injured, right half Neill got a round of applause for sportingly choosing to put the ball out of play so that the Liverpool man could get attention. Thompson too, got applause for a bit of foot-jugglery that would have graced a music hall, but unfortunately he lost possession at the crucial moment. 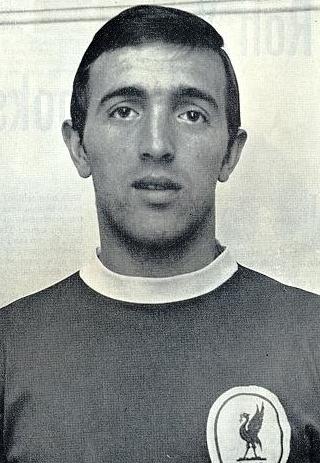 Arrowsmith was luckless not to get a goal when Furnell edged his centre on to the bar and then saved on the line with Hunt an imminent scorer from the rebound. Furnell brought off a grand save from St. John, so one way and another he was having his moments against his old comrades.

Liverpool went further ahead and put the championship virtually in their pockets at 53 minutes when Thompson got their third. He brought the ball in from the wing, transfered it to his right foot, and fairly hammered it beyond the reach of Furnell for a goal which received a standing ovation. A moment later Furnell was saving at the second attempt from a good cross shot from by Hunt. It required only Hunt and Callaghan to get a goal now for all the Liverpool five to have a share in the victory.

Liverpool went on now almost strolling in their triumph, and getting a further goal to Thompson at 57 minutes. He came into the centre to score from long range after weaving his way to an opening and probably unsighting Furnell thoroughly in the process. 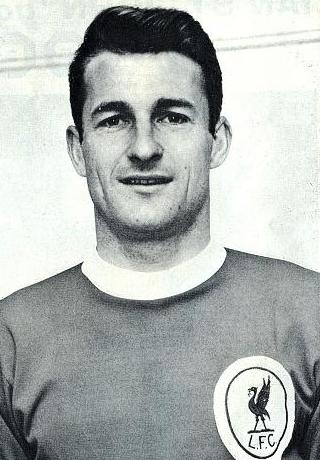 EVERYTHING IN THE AIR

Hats, scarves, newspapers and everything throwable went into the air when Hunt got his goal at 60 minutes. Milne and Thompson had the part in the lead up to this, and again Furnell was completely beaten by a right-foot shot from a fair distance out. Arrowsmith got the ball in the net a sixth time, but the whistle had gone for a penalty kick, the handling offence apparently taking place on the line following Hunt's centre from which the ball was put into goal.

Callaghan was given the award, naturally, as the only forward not on the score-sheet, but to everyone's dismay Furnell brought off the save from his low shot when falling on the ball, literally on the goal-line.

The noise when the referee finally did sound the end was so great the whistle could scarcely be heard. Everybody obeyed the instructions to stay behind the terraces except a few boys, and there were handshakes all round between Liverpool team mates and their Arsenal vanquished. The Liverpool players went down the subway to accompaniment of the chant "We won the the League" and calls for Yeats and manager Shankly.

Then the eleven, plus their mascot, returned to the field almost immediately to a rapturous reception from the terraces, and a standing ovation from everyone in the stands. The roar when they ran in front of the Kop increased by 50 per cent. I don't think I have ever seen such an Anfield scene. It almost baffled description by its warmth and intensity. Yeats came to the touchline and a gave a lady fan a kiss, and received a bottle of champagne for the first celebration of the wonderful season.