Abraham "Avi" Cohen was the first foreign player to represent Liverpool since South African Doug Rudham arrived 24 years earlier. His transfer successfully concluded six months of Liverpool interest in the player. They had received glowing reports about the defender and in February 1979 he spent a week training with the club under the watchful eye of manager Bob Paisley. He joined Liverpool in the summer and due to Ray Kennedy's absence, he was given an early debut at Leeds on 15 September 1979 on the left side of midfield. Cohen didn't feature again until the end of the season as the champions had a fairly settled side who went on to clinch its second consecutive championship against Aston Villa. It was a day of mixed fortunes for the Israeli left-back. After David Johnson had given the Reds an early lead, Cohen had the misfortune to slice an attempted clearance over Ray Clemence's head into his own goal. But five minutes after the interval, he made up for his error by driving a low shot into the Kop goal to give Liverpool a lead they didn't surrender.

Cohen played in 14 League matches the following season when Alan Kennedy was out injured and rarely on merit. He stirred up controversy when he decided to play against Southampton on 20 September 1980 that fell on the Jewish holiday of Yom Kippur. Cohen was lambasted by the Israeli media. Cohen didn't feature from February onwards as Liverpool went on to win their third European Cup and returned to Israel in November. He moved back to Britain in May 1987 playing one season for his old teammate, Graeme Souness, at Rangers. Cohen managed several teams in Israel from 1990-2001 and the former Israeli captain was the chairman of the Israel Professional Footballers Association for over five years. Avi tragically died only 54 years of age on 29 December 2010 following a motorcycle accident in Israel. Kenny Dalglish remembered his old colleague: "Avi was a lovely man who will be remembered fondly by everyone at Liverpool who knew him. He quickly integrated himself into the football club when he joined us and spent a lot of time learning English which really made him popular. He was well liked by all the lads and although he didn't spend a long time at the club, he certainly left his mark and no-one will forget how he helped us win the League against Aston Villa."

Former Liverpool defender Avi Cohen - the first Israeli to play for Liverpool - has penned a letter to fellow countryman Yossi Benayoun following his transfer to Anfield.

An article from the Liverpool Echo on 3 February 1979.

An article from the Liverpool Echo on 17 February 1979.

"When Avi came in for training, he found that his peg was next to Kenny Dalglish‘s. Avi repeatedly said to Kenny, ‘Me, you, same.’ Kenny replied in his broad Glaswegian, ‘What do you mean by that?’ 'You learn English like me, Ken'..." 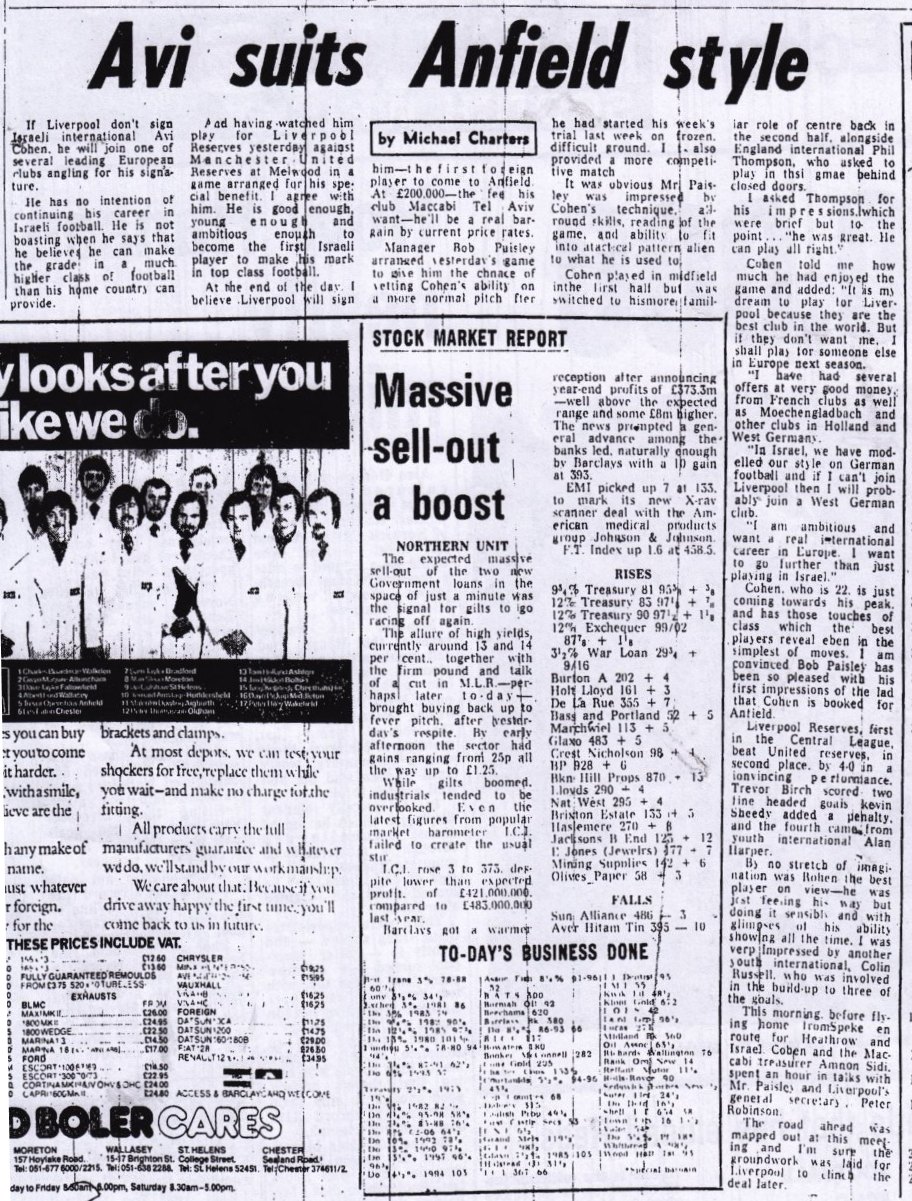 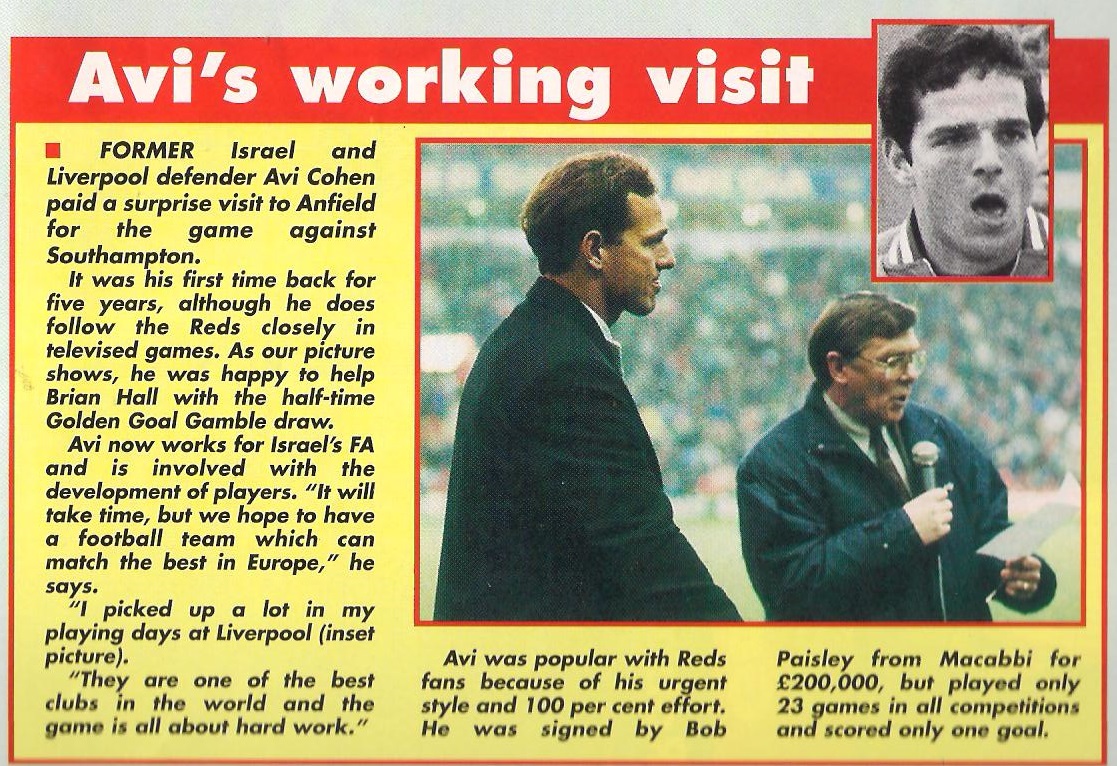 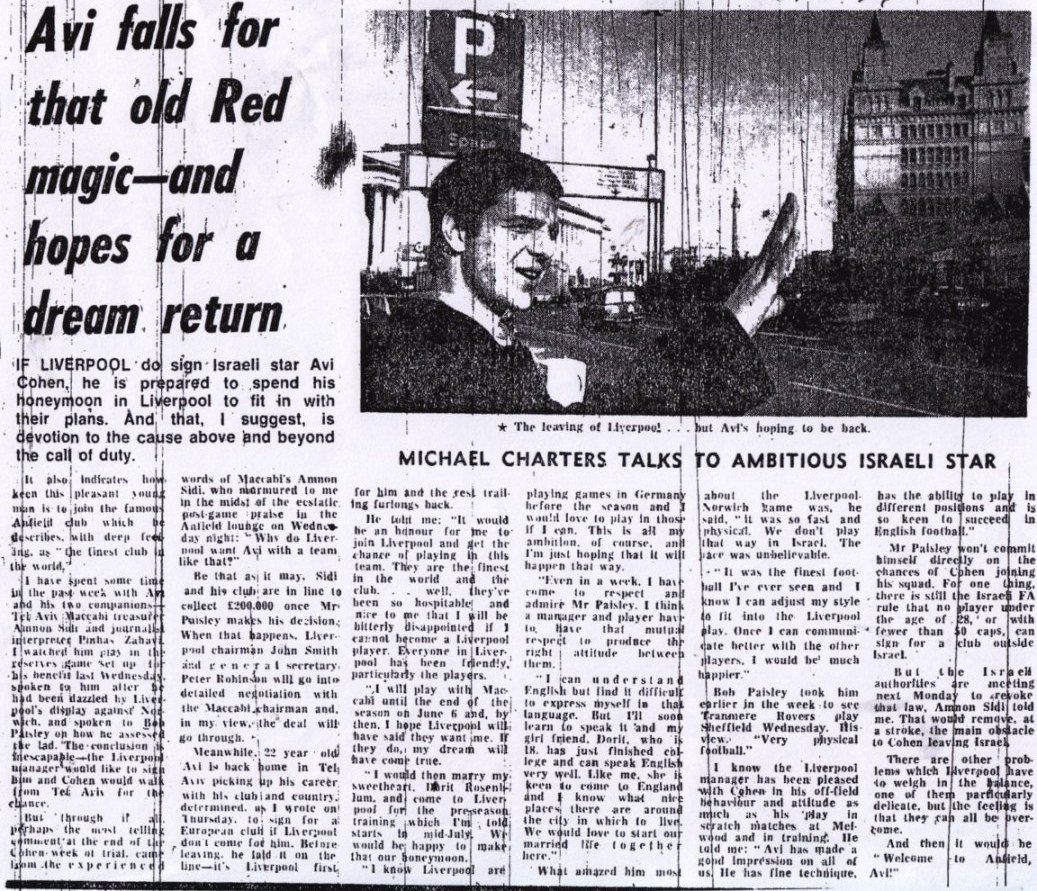 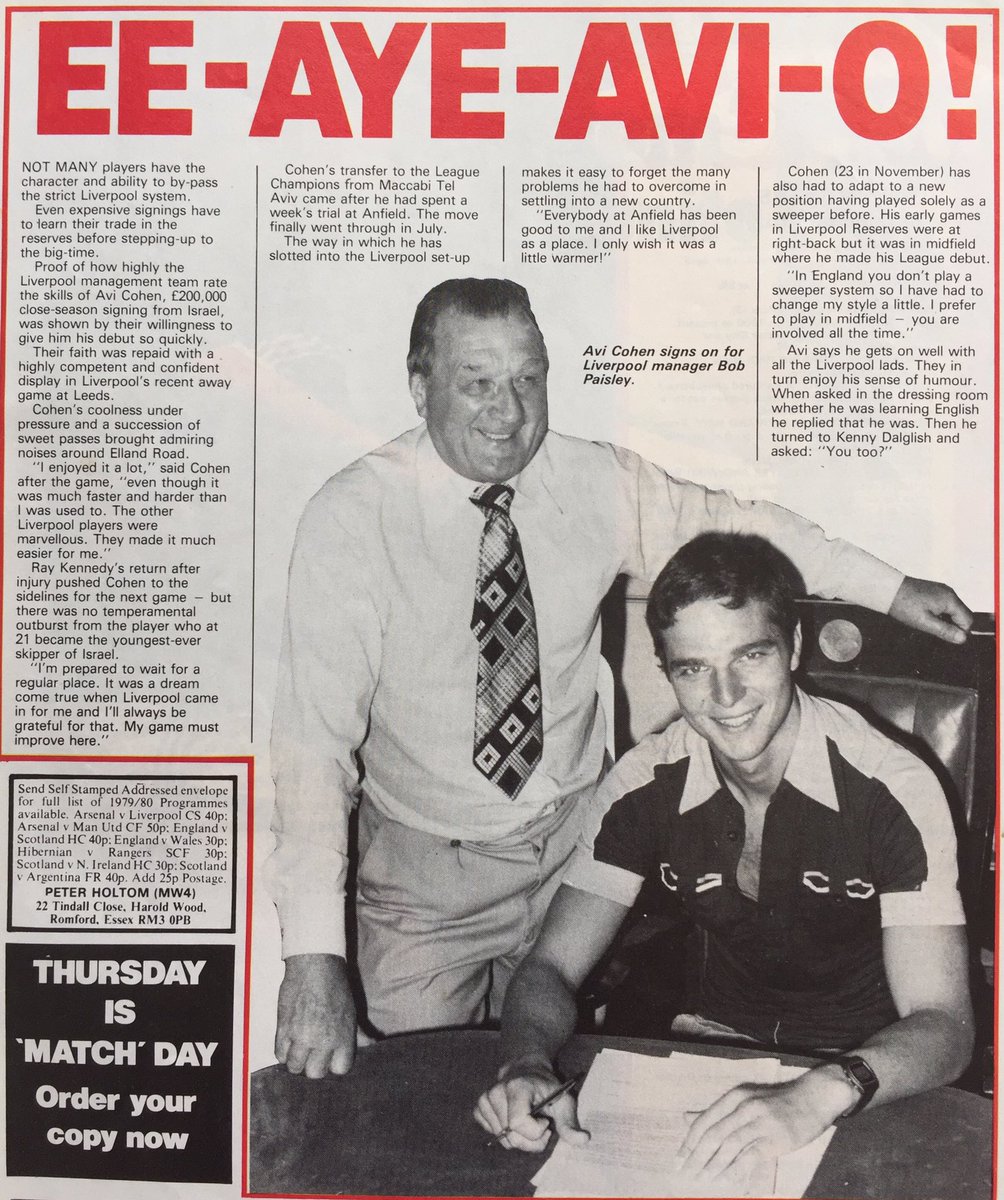 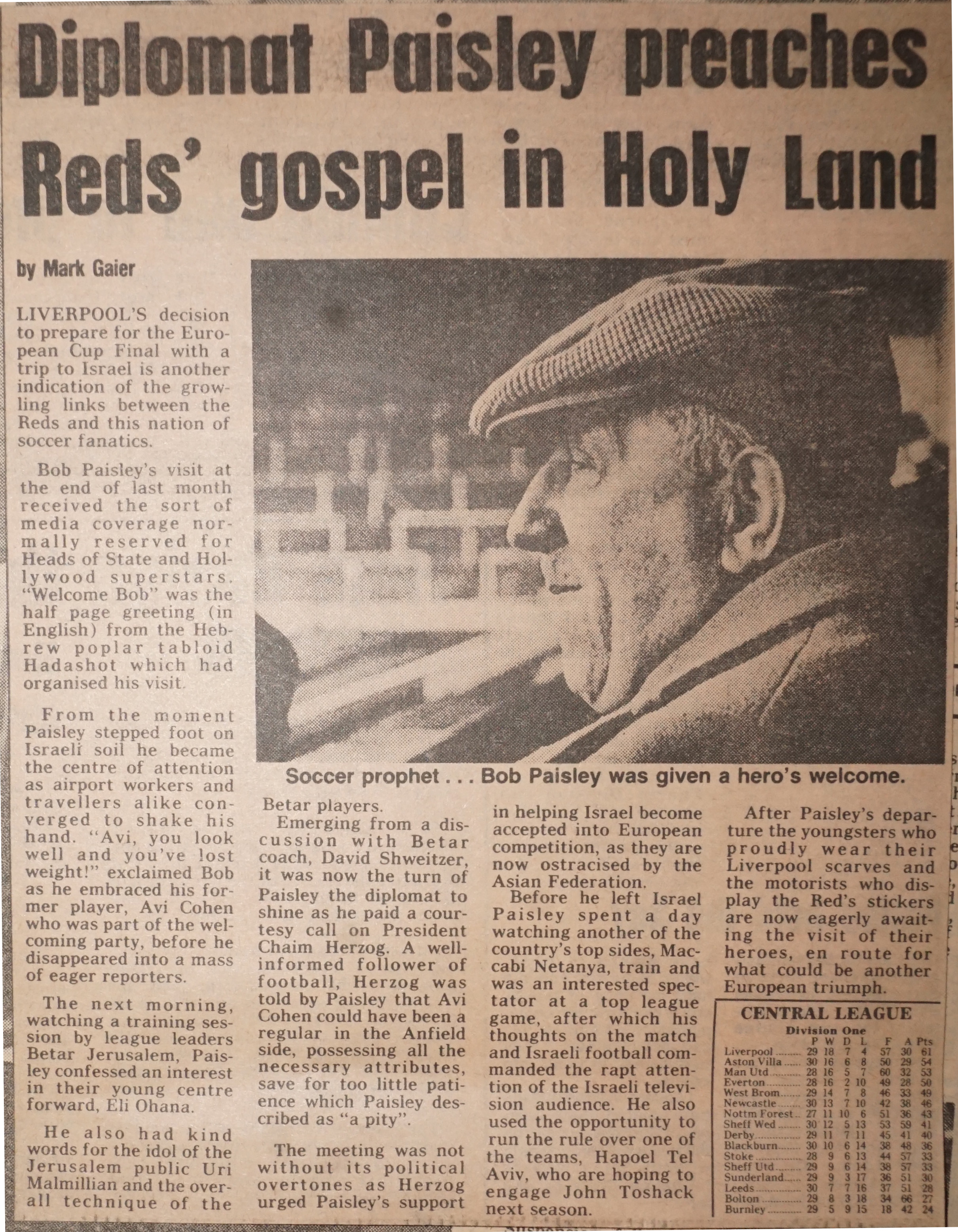 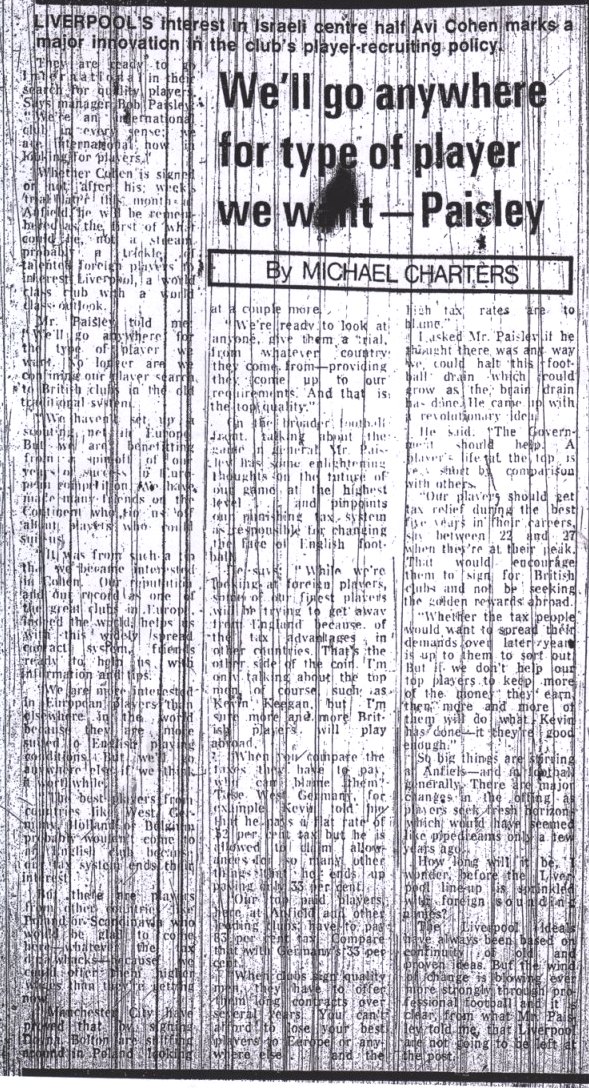 We'll go anywhere for the player we want, says Bob Paisley in the Echo on 3 February 1978