So begins the fairytale... Bjørnebye scored the winning goal in the Norwegian Cup final for Rosenborg. The following day Liverpool boss, Graeme Souness, was on the phone offering him a contract. A couple of days in 1992 changed his life in an instant. Bjørnebye had a baptism of fire when he made his debut against Coventry on 19 December 1992. Liverpool lost 5-1 at Highfield Road, which was the club's biggest defeat in 16 years! The Norwegian struggled with life in the Premiership in the first two seasons but his breakthrough came in the 1994/95 season. Unfortunately, he suffered a broken leg reaching for a cross while his studs got caught in the grass when playing against Southampton in April 1995. Due to the injury, he only played two games in the 1995/96 season but his career hit peak form in 1996/97 when the Reds finally mounted a serious assault on the title although it failed in the last stages. He delivered pin-point passes into the penalty area providing plenty of goals for Fowler and Collymore and was voted in the Premier League Team of the Year.

Bjørnebye became one of Houllier's first casualties when he overhauled the squad in the summer of 2000 after he hadn't featured at all in the previous season and been loaned out to Brøndby for the last couple of months. He rejoined Souness at Blackburn in the summer. After regaining his fitness he featured in Rovers' successful promotion season and returned to the Premier League where he played 23 games in the 2001/02 season before fracturing his eye-socket in a freak training ground accident in April. A month before he celebrated winning the League Cup for the second time in his career as he had been in Liverpool's team that Bolton 2-1 seven years previously. He had to undergo corrective surgery after complaining about blurred vision. Bjørnebye finally returned seven months later to play in the League Cup quarter-final against Wigan on 17 December 2002. Bjørnebye injured his foot in the game and when he was recuperating in Norway he was rushed to hospital as his foot was numb. The surgeons were forced to by-pass two failing arteries in a five-hour operation to save his foot from being amputated. Sadly, Bjørnebye had to retire from football in March 2003.

Bjørnebye returned to the game in December 2003 when he was named as Norway's assistant manager, a post he held until 2006, at which point he was appointed as the manager of IK Start. However, he was dismissed towards the end of his second season with the Kristiansand club in serious danger of being relegated from the Norwegian Premier Division. in 2012 Bjørnebye was appointed Head of Children's and Youth Development at the Norwegian FA. In March 2015, Bjørnebye succeeded Erik Hoftun as the sports director of Rosenborg, Norway's most successful club.

Rush still has that sparkle

Match report from Press Association on Liverpool - Southampton on 05.04.1995.

Back in the scoring habit

"It's a very sad day. As far as I am concerned it could hardly be worse for Stig, as he is the consummate dedicated professional. He is as good a professional as any I have worked with, I couldn't name anybody better. He is fine role model, and a proper, proper human being.

Stig has had a wonderful career, it's a great shame that it has to end, with a freak training ground accident as he felt, quite rightly, that he could have played longer." 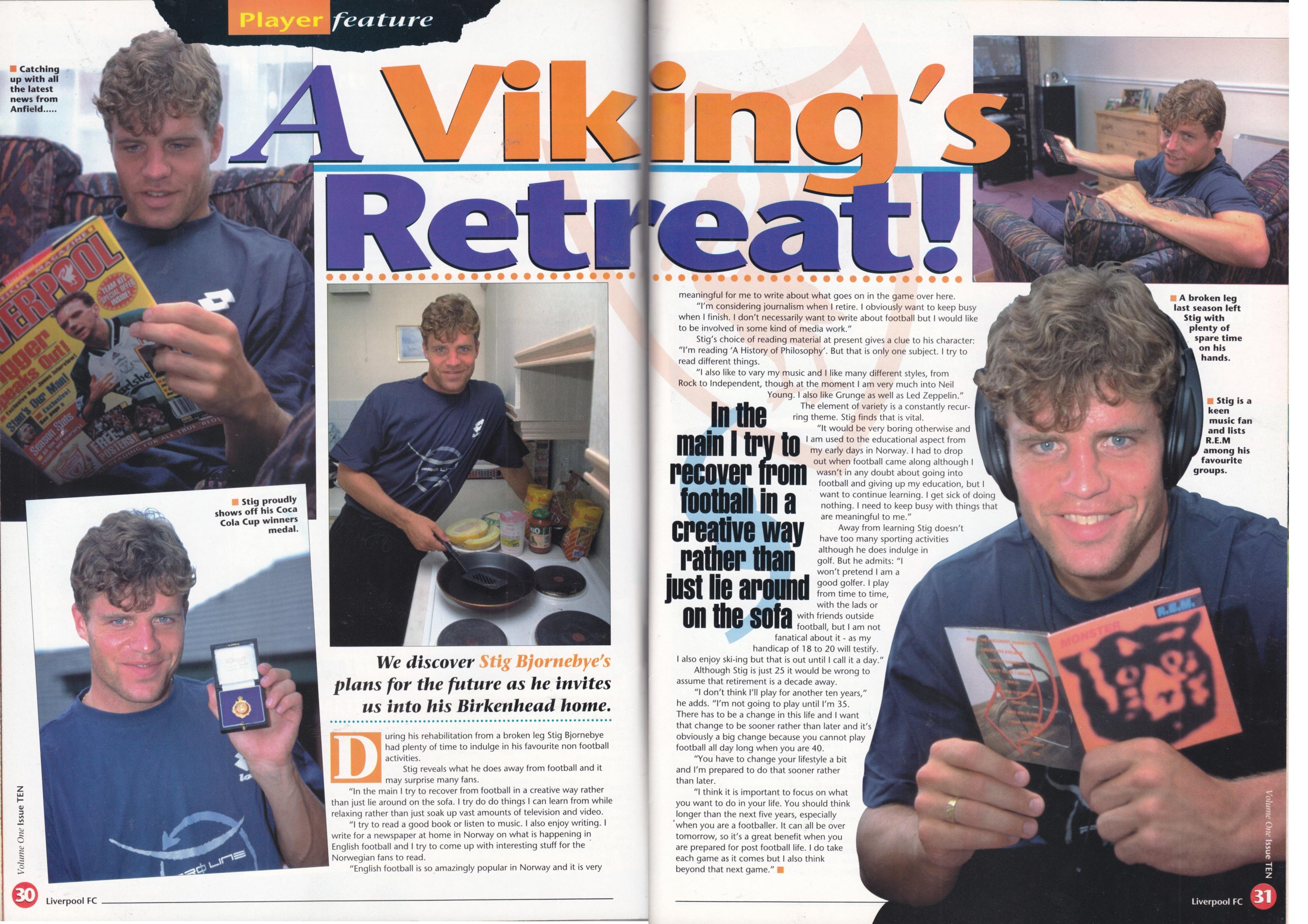