When Gerard Houllier saw the opportunity to snap up Biscan from Croatia to challenge Didi Hamann for the defensive midfielder position, he grabbed it with both hands. Biscan arrived in the winter break of the Croatian season in December 2000. Biscan initially struggled to make an impression in a red shirt as Liverpool charged on to a dramatic treble in the 2000/01 season. He did score his first goal in the League Cup semi-final against Crystal Palace at Anfield and featured from the start in the final win over Birmingham. The 2001/02 and the 2002/03 seasons were a nonstarter for Biscan but he started 35 games in 2003/04 as Houllier used his versatility as he promised to do pre-season. "I think he will be playing more this season. He can play at centre midfield and centre-back. He is strong and powerful and quick. Sometimes he loses the ball when he passes, but then who doesn't? I prefer players who try things,'' Houllier said. Biscan had, though, the odd slip-up in the centre of defence as he was paired with Hyypia in the absence of Henchoz who was getting rather injury-prone.

Rafa Benítez took over from Houllier in the summer and he told Biscan to focus on being a midfielder, seemingly to the player's relief: "My confidence suffered playing at the back but that's not an excuse. I'm aware I took some of the of the fans' frustration but that's not a problem. I suppose the fact I'm playing in central midfield is one of the reasons why I'm playing better," Biscan explained. Undoubtedly Biscan's best moments under Benítez came in his last season when he solidified his cult hero status on the Kop. He had been told he had no future at Anfield by Rafa in December and would be allowed to leave in the summer when his contract expired. He played his part in the Champions League run that ended in success in Istanbul, most notably away to Deportivo La Coruna in the group phase when he went on a few galloping runs which were reminiscent of those by absent captain Steven Gerrard. Biscan played from the start against Leverkusen in the last 16, Juventus in the quarter-finals and in the semi-finals against Chelsea but remained on the bench in the final.

Biscan went to Greece to ply his trade with Panathinaikos in July 2005, having been close to joining the Greek side on loan prior to the 2003/02 season. After two and a half years in Greece, the 29-year-old returned to Zagreb to take over the captaincy of Dinamo Zagreb, being a cult hero back home as in Liverpool. Dinamo were Croatian champions in both 2008 and 2009 as well as lifting the Croatian cup in the same years. Injuries did restrict Biscan to only 61 league games in five seasons in Zagreb and he retired in 2012.

In 2016 Biscan returned to the game with Croatian second-tier side Rudes. He won promotion, leading to him being appointed as manager Olimpia Ljubljana. Despite winning the league and cup double in 2017/18, he was sacked by owner Milan Mandaric and returned to Croatia, taking over at Rijeka.

By Andy Hunter Chief Football Correspondent of the Liverpool Daily Post on 25 March 2005.

Dinamo Zagreb's domestic supremacy spells bad news for their European aspirations, according to Igor Biscan. From The Guardian on 24th September 2008.

"Eegs is a quiet guy but he's also really funny when you get to know him. He´s a superstar in Croatia and he once told me the police even stop the traffic for him in Zagreb so he can drive safely." 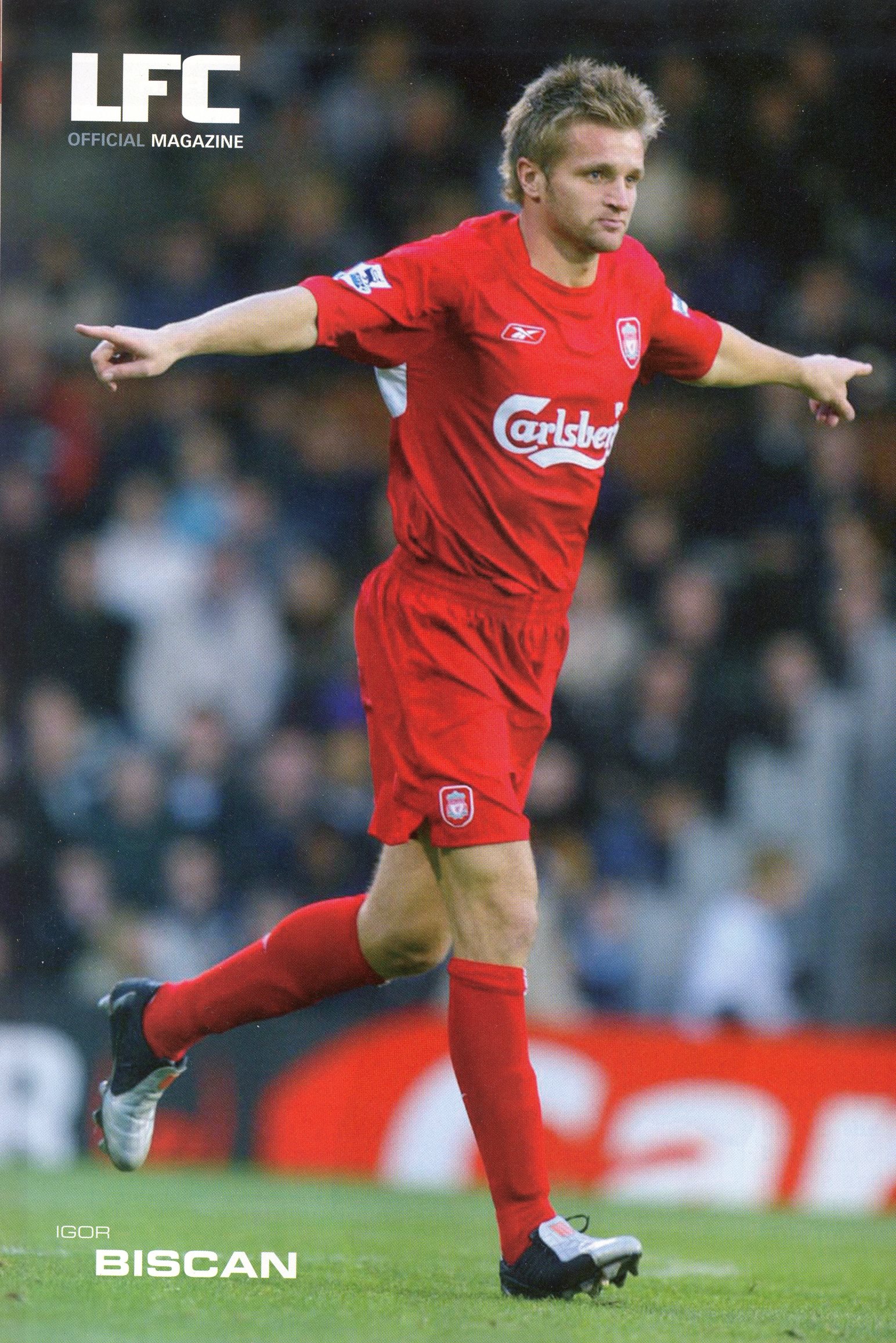 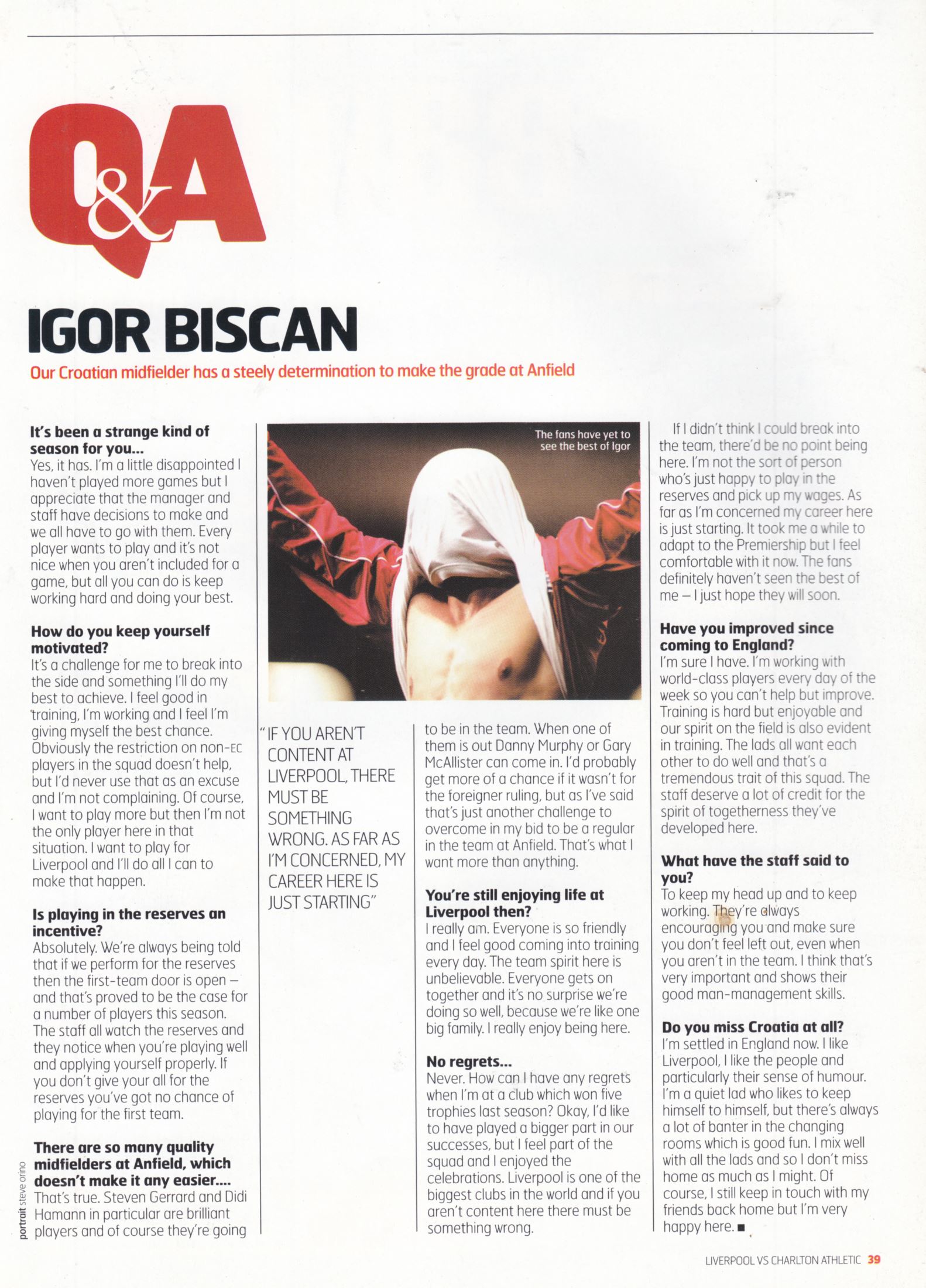