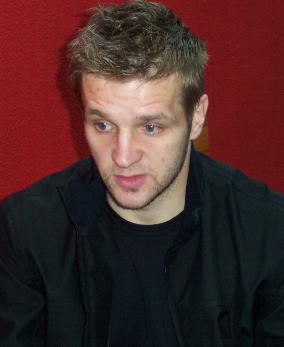 It’s not easy when you’re young to go abroad to play in a foreign country.

You were captain of Dinamo Zagreb, only 21 years of age.

The difference between playing in Croatia and playing in the Premiership.

Did you have many options when Liverpool offered you a deal?

You never know. Some people come to you and talk about options. At the end of the day I came here and I don’t regret that decision. You don’t decide it overnight. It’s not easy when you’re young to go abroad to play in a foreign country. I expected it to be difficult. I was young and was quite connected to my friends back home. Everything was new for me but I’ve settled down now.

Do you see your friends and family a lot?

Ocassionally my family comes to visit me and I have some friends over all the time. I am never on my own and that’s important. It’s not easy to be on your own.

What’s your situation with the Croatian international team?

It’s a strange situation at the moment. I haven’t played in the last few years but I was called up for the last game of the qualifications. I didn’t play because I had an arguement with the manager and since then I haven’t been called up again.

You’ve scored one goal for Liverpool...

Only one for now. I hope to score more. I scored against Crystal Palace in the semi-finals of the Worthington league cup, we lost 2-1 at their ground. We played really well in the second game. I was running with the ball from the halfway line and just scored past the keeper. It wasn’t the best of goals but it’s a special goal for me because it was my first and last goal since I’ve come here.

At least you have scored one more than Stephane Henchoz.

Yes, he hasn’t scored. As a defender you don’t get many chances.

You went straight into the team when you came here.

Yes, but I didn’t play a lot the next two seasons, but this season has been good for me. In the beginning it was difficult. You think a lot about what you did wrong. That’s part of any football career, because sometimes you are not playing. It’s not an easy feeling.

Did it ever cross your mind to change clubs?

Yes, sometimes. You start to think about moving somewhere else when you’re not playing.

How is it to be a Liverpool player?

The key players are still young so the team can only improve. It’s a good opportunity for a player to be a part of a really strong team who can win trophies. The fans are always behind the team. It’s really special to play for Liverpool.

Do the players socialize a lot?

Sometimes the players go out together. Some of the players have families so it’s difficult to be with them. Jerzy Dudek is my room-mate and we spend some some time together.

What’s your routine day as a professional footballer?

It’s quite boring to be honest. Every day is almost the same. Wake up in the morning, go to training, have lunch here at Melwood, rest. I watch television or maybe sleep for hour and a half or two. Maybe you do something together with your friends, then you go to sleep and wake up to train again the next morning.

I like basketball a lot. When I was younger I played a bit with my friends. I thought I was quite good [laughs]. I like tennis. I like watching handball, volleyball and Formula 1, especially Montoya.