After going through the youth system at Millwall without making an appearance, Babb established himself in midfield at third division Bradford from 1990, scoring 14 goals in 80 league appearances and in July 1992 he got his big break when he moved to Premiership Coventry City. He took over the captaincy at the club and was voted Player of the Year at the Sky Blues in the 1993/94 season. Babb became Britain's most expensive defender when he was bought along with John Scales to solve Liverpool's defensive problems after shining brightly for Ireland in the 1994 World Cup. Babb's strengths were his speed, man-marking skills and tackling but his distribution of the ball, positional sense and sometimes alarming carelessness let him down. He became an integral part of Evans' 5-3-2 formation with Scales and Ruddock alongside him in the centre of defence. Babb scored a single goal for Liverpool that came against his former club, Coventry, on 4 September 1996. Babb was a regular in his first two and a half seasons at the club but lost his way somewhat in the otherwise impressive 1996/97 that ended ultimately in disappointment. Mick McCarthy, then Republic of Ireland's coach, tried to analyse what had happened to the previously composed defender at Liverpool: "I don't think that formation suited Babb, who has always looked more comfortable in the middle of a flat back four. It didn't help that other senior players at Liverpool were struggling at the time, and the end product was that Phil began to lose confidence."

Injury disrupted Babb's progress in the following season but he was back in the first 11 from January 1998 onwards. Houllier gave him a chance after he took sole control of the club in the 1998/99 season but he struggled to recapture the form that prompted Roy Evans to sign him for the club. The writing was on the wall for Babb when he was left out of a weekend tournament in Belfast in July 1999 and the arrival of Hyypia and Henchoz in the summer effectively made him a spectator in his last year at the club. He was loaned for one month to John Aldridge's Tranmere in late January and helped Rovers to the League Cup final. He made a surprise move to Sporting Lisbon where he enjoyed a revival of some sorts and enjoyed his football again for two years, winning the League and Cup double in his second season and voted the league's top overseas defender. Sporting offered him a new contract but he and his family wanted a return to England. He opted for Peter Reid's Sunderland in the summer of 2002 but was relegated from the Premiership in his first season and spent one year in the First Division before retiring from the game that had given him so many highs and lows. Since then he has largely been out of the game, except for a spell as manager of Conference South side Hayes & Yeading from the summer of 2013 until February 2015.

Ferguson wins the battle of the managers

Dominic Matteo, said: "The joke was definitely on the rest of the players. Everyone said that he wouldn't score, but he kept them quiet with that goal."

Babb was surprised by his goal: "The lads are still in shock, in even more shock than me. I still haven't come down yet. It's such an nice feeling to score against your old club."

Phil Babb crashed memorably into the post at Anfield vs. Chelsea on 4th of October 1998.

While he was lying there holding his knackers, someone shouted 'Don't rub them Phil, count them'."

Interview with Babb and Scales from LFC Matchday Magazine 1995/96

LFC Magazine interview with Phil Babb after the 1994/95 season 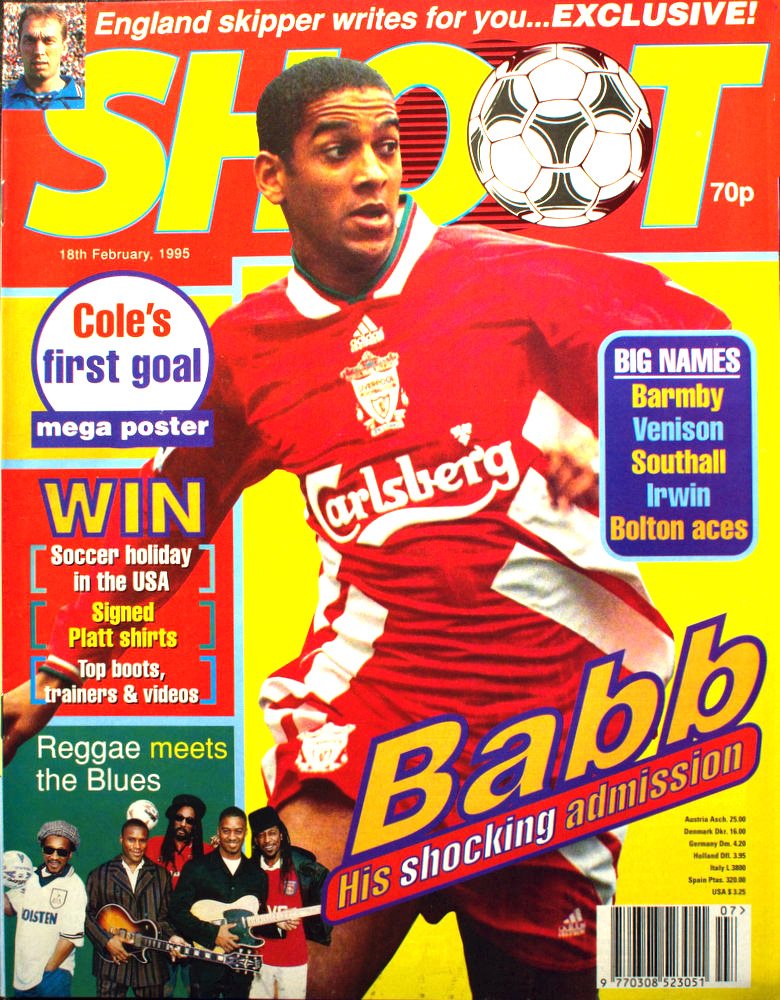