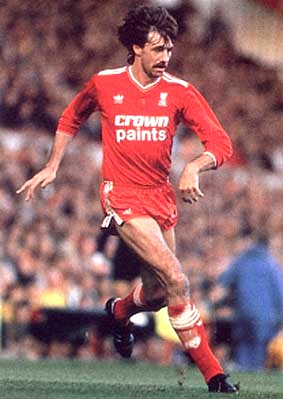 Mark Lawrenson was my three in one buy for Liverpool. In the summer of 1981 we had raised one million pounds from the sale of Ray Clemence, Jimmy Case and Colin Irwin. I spent 900,000 of it on one player Mark Lawrenson, but he turned out to be several players - centre half, full back, midfield man, you name it.... he’s even our standby goalkeeper if Bruce should get injured in a game!

Every manager values versatility in a player, but most of the game's jack of all trades are masters of none. Mark is a master wherever he plays. He started his Liverpool career as a left back and we must have used him in just about every position on the field since. When injuries leave you below strength and worrying about a particular hole in your team, Mark can be relied upon to fill it. Apart from the all-round ability that he possesses, he has a perfect attitude. He is a very intelligent and easy going individual. He is quick to grasp exactly what is required of him in a particular area of the field, and doesn't allow anything to upset him.

I never had any qualms about pulling him aside and asking him to play in an unfamiliar role for us. However important or difficult the job I had in mind for him, he took it in his stride. There were no long faces or protests. A change of position really didn't seem to bother him; or if it did, he was sufficiently aware of the needs of the team not to complain about it. His easy nature impressed me on the day that we signed him. There was a bit of a tug of war developing for his signature. Manchester United were showing a keen interest and Arsenal had already set up a deal with Mark's club, Brighton and Hove Albion. We had to move quickly, and arranged to meet him at a hotel just outside Heathrow Airport, where we had just touched down from a pre-season trip to Switzerland. Terry Neill, the Arsenal manager, was actually waiting in the next hotel in case Mark said 'no' to us. But if there was any pressure on him, it didn't show. He was a northern lad and he wanted to play for Liverpool. It was as simple as that.

We nearly bought him from Preston in 1977, but it was playing at the heart of Brighton defence against Kenny Dalglish in March 1980 that he really caught my eye. Kenny is notoriously difficult to tackle. He is so clever and deceptive and uses his body to shield the ball from opposing defenders. And yet here was a 22 year old, fresh out of the Second Division, winning the ball from him with sharp, clean challenges. I don't believe I have ever seen anybody who makes better tackles inside his own penalty area. It’s a dangerous business, of course. The slightest error of judgement will result in a penalty award. But I'm pushed to remember more than one spot kick that Mark has conceded. 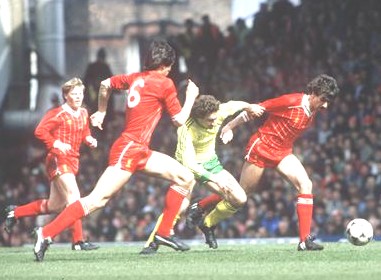 He has the ideal physical makeup for a 'ball winner'. I don't suppose he would win too many prizes for his running action. He is not an elegant mover, but he is particularly quick. He possesses very long legs and a correspondingly long stride. So although he looks a bit leggy when he's in full flight, you can be sure that he has the speed to get himself out of trouble. There is a wiry strength about him too. He doesn't weigh much over 11 stones, but he's a tough and durable customer. You won't see him being barged or knocked off the ball by bigger, bulkier men. He is steely and hardy. But he times a tackle so precisely that very often there is little or no physical contact between him and the opponent in his sights. They are painless, clinical challenges. The ball is nicked off the toe of the attacker as clean as a whistle, almost without him realising it. Indeed, sometimes you see them run on for a stride or two as if they've still got it. But, like a thief in the night, Mark has made off with their possession before the alarm can be raised, and they can give chase.

There are not too many really effective tacklers in the modern game. It has always been one of my firmest beliefs that the ball can be won by the collective effort of players working together to put the opposition under pressure. If you can force mistakes, you can regain possession by intercepting rash passes. There is not always the need to go sliding about on your backside at full stretch. It's a lesson that Liverpool learnt from playing against the best teams on the European mainland. But from time to time in a game, a defender may get isolated and asked to deal with a threat on his own by making a saving tackle. When that happens, Mark Lawrenson is the defender you should choose to make that tackle for you.

I paid nearly a million pounds for that unique talent, and I dare say that Ron Greenwood and Bobby Robson would have gladly splashed out a similar fee to buy back his eligibility for England. Mark was born in England, but accepted an early opportunity of international football with the Republic of Ireland through a family qualification. It was an understandable decision, and he has some very good players around him in the Eire team.

But as an England defender, he would have had at least 50 caps to his name now, and figured in two World Cups. It has been one of those ironies of the past few that our national side been crying out for a defender with pace, and intelligence.... and an Englishman, playing the English champions. been displaying more class and intelligence just about any central defender in Europe.