All right Rafa - it's your round so get the beers in 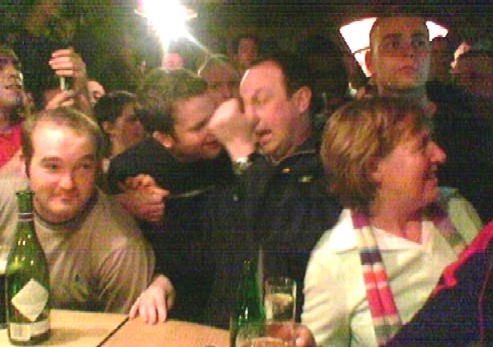 "Thats from my phone too i think. Some lad in the bar wanted it as he is in the background, so bluetoothed it to him. Well in to Ali for taking the pics though, as she was stood next to Rafa. We wont mention the fact it took her a good 15 mins before she realised who was stood RIGHT NEXT to her." - Gareth on RAWK

Benitez left around 100 Reds fans stunned in March 2005 when he walked into Jamesons bar in Cologne city centre. The Liverpool team and fans were in Germany for the crunch Champions League clash with Bayer Leverkusen. 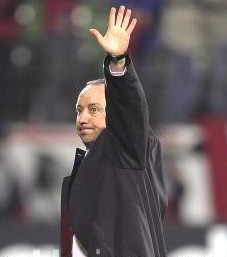 Lads give us five minutes to get the interviews out of the way and I'll see you in Jameson's. Mines a fine red please. And Jon, keep your mits off of it.

Benitez is believed to have been looking for somewhere to watch the Chelsea-Barcelona match after he found it wasn't being screened at the club hotel. He ventured out with first team coach Alex Miller and after walking around the city centre for a few minutes stumbled upon Jamesons, which was packed out with Liverpool fans.

Radio City sports presenter Paul Salt was in the bar at the time. He said: "It was absolutely unbelievable. The bar was rammed with Liverpool fans and they had been singing Rafa's name all day. All of a sudden the doors opened and in walked Benitez with Alex Miller and everyone's jaws just dropped. When he got to the bar he was mobbed; everyone was shaking his hand and wanting to have a chat with him. Rafa recognised me because I've interviewed him a few times for City and I asked him what he was doing there. He told me he had just been looking for somewhere quiet to watch the Chelsea game and this was the only place he could find. I think word must have got around that the Liverpool manager was in Jamesons because more and more fans started turning up. In the end he stayed for about half an hour and had his picture taken with everyone. He was an absolute gentleman." 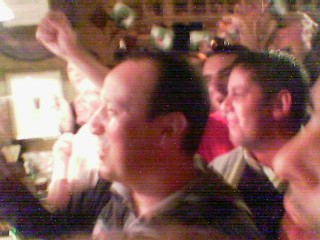 Fans in YNWA.TV's forum were impressed by Rafa:

"Can't believe it. About 500 people in the Irish bar - packed out and in walks Rafa with Paco, and Alex Miller. Place went beserk - everyone singing his name, he´'s laughing. A very famous night -you'll be heARING all about it in weeks to come. Everybody took photos. Rafa even joined in with "Liverpool"!!!!!!!!! Fantastic!!!!!!!" - Leggings
-"ive never ever in my short 23 year life seing anything quite like this. Truly a wonderful man, if this bloke doesnt bring us the title, nobody will Rafa, your a legend mate, you`ve just gone down in history as the spanish Shanks!!!!! He Made The People Happy!!"  - Chrisbonnie
"Rafa repeatedly professed his admiration for great 'Shanks', and he is following his footsteps in being the 'peoples' man'. Good ole Rafa. hope he succeeds here for us, for LFC and himself." - Toni 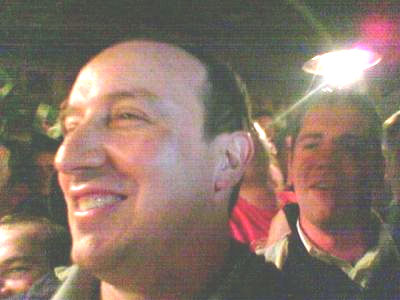 "One cannot be a legend overnight but no matter what his reasons for walking in that pub, he did. And 500+ Supporters where well made up that he did. If he never wins anything with this club the people who met Rafa last night will never forget it. If he goes on to be the legend we all hope then those lucky people who was there will remember when he joined in with "Liverpool, Liverpool" chant.

No-one can change history, only can only write his own. Good effort Rafa!"
Enjoy! -gjr1
"Im not saying it wasnt a good thing that he did. I understand that he'll have made the night of 500+ liverpool fans but comparing him to Shankly and Paisley is unfair imo.

He's done fantastically well in his first season here and im massively confident that he'll go onto be a successful manager here, but to compare what he's done to what Shankly and Paisley did is wrong. Those two won numerous trophies for the club and rafa hasnt yet. I know he hasnt been here 5 minutes yet but i think we're just heaping unfair pressure on the bloke and building him up by calling him the spanish Shankly when in reality he's a long way from matching what Bill did for this club. Ok, he may be a man of the people and fantastic gestures like tuesday night show this, but lets not compare him to Shanks yet eh. Afterall its what the majority slated Houllier for doing with certain players." - Stevieboy2k 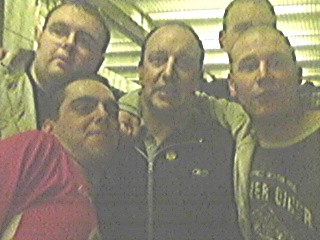 Note on YNWA: Pics like that usually come with a ransom note attached.
Response to Rafa's pub crawl on RAWK's forum:
"Fucking love the fella. Top man, wish I was there and can't wait to see the pictures." - Hightown Phil
"I love Rafa to bits, I think he's immense and will do better for the club than Houllier did. But he can't be seen to have done so already simply on reputation, he has to do better with us than Houllier over a steady period." - Tom_289
"What a breath of fresh air this guy is, as a man he carries himself with such dignity, never complains about our injuries or whines about officials after games and never makes excuses about poor displays. Rafa is becoming a messiah figure, remember the Rafa picture carried around Iahtola style at Cardiff , and now he , Pako and Alex in the bars with the fans thanking them for their support." - Ghandi
"What a top fella, Rafa is.

Sounds like the time Shankly was stood on the Kop, and the Kop sang 'Shankly, Shankly, give us a song'.

Maybe a good omen for tonight.

Come on you mighty REDMEN." - dom_d 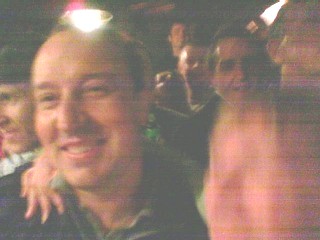 "It was like Jesus walking into a room!" claimed Alan Baynes, a school inspector from Kirkby who was inside the pub. "The place went absolutely mental. Rafa walked in a with a couple of fellas and as soon as he set foot in the place, Hernan Crespo headed the ball past Tim Howard and Manchester United were effectively out of the Champions League, What a moment! United as good as out and Rafa's in the same pub! It was Shankly-esque!"

As Benitez stood there, looking at what must have been 500 Liverpool fans going mad, a chant from the back started up.

The Liverpool manager looked on in awe as he saw for the first time just how passionate his team's supporters actually are.

"He looked absolutely amazed at what he was seeing," claimed Chris Brannan, a supporter from Tuebrook who had followed the Reds since they were in the second division. "He wasn't drinking like the rest of us but then he didn't need to. Imagine for a minute you're Rafael Benitez. You're a Spanish manager who doesn't know exactly what the Liverpool fans are about and there you are, walking into a pub in Germany on the back of two big defeats and suddenly you've got 500 proper lads singing your name. It was like something from Palestine. He means that much to us! Everyone, and I mean everyone, goy out a mobile phone and tried to take his picture as he stood there with us the normal Liverpool fans watching the Chelsea and United games on the TV.

"People talk all this rubbish about Everton being the People's Club but we've always know that was just words said to appease the Everton fans. Could you imagine Moyes, or any other manager in the world for that matter, going to the pub with the fans? No chance.

"Rafa did it on Wednesday night and as far back as I can remember, and I'm an old man, I've never heard of any manager doing something like that. Everton, The People's Club? Don't make me laugh. We are the real People's Club. Always have been, always will be."