A Liverbird upon my chest

Robbie Ashcroft (aka Mottman) relives the infamous Charity Shield where Keegan got sent off.

After the utopia of winning the FA Cup 3.0 against Newcastle United in May 1974, the City of Liverpool was really buzzing. Those fortunate to have jobs went to work with a spring in their step and a smile on their face. Productivity was at an all time high and the people were happy these where the special times that will stay forever etched in your mind.

Nobody could possibly know what was in store for us, but we didn’t care – this was Liverpool Football Club - the love affair grew stronger day by day.

Don Revies Leeds United had won the Championship that season, with the Tricky Reds finishing 2nd some five points behind. A season curtain raiser would take place on Saturday 10th August 1974 in the form of the Charity Shield at Wembley. Excitement intensified as this would be an opportunity to visit Wembley for the 2nd time. I always remember my Dad saying “Never miss an opportunity to visit Wembley, it’s a special place with special memories, some teams supporters will never ever play there.” I certainly had no intention of missing this opportunity.

Aged 17 at that time, I had left school and worked in the City centre as a trainee car mechanic / storeman. The money wasn’t that great but at least I had a job and an opportunity to buy some decent clothes and get out and about. There was a great big world out there and we wanted too see as much of it as possible – following those Mighty Reds. At that time I had been saving up to buy an ALBA music centre from Woolies in the Marion Square, I was only a couple of quid short, very soon I would be able to play my own records on my own music system. One pay day I managed to find the extra money and raced home from work to collect my savings to make my purchase.

I was gob smacked to find that my brother Vic [eight years my senior] (Zappa on RAWK) had put some of his own money with mine and had already purchased the music centre for me. At first I was disappointed, I wanted to buy it in my own right, and then it sunk in that he had my best intentions at heart. His gesture was very much appreciated but the complement had to be returned, I’d have to put my thinking hat on? He had done something special for me I would have to do something special in return. One warm July night in the Park Hotel, the lads that I hung around with discussed the trip to Wembley and the best option’s for travel. The penny finally dropped! I’d mug him for a ticket for the match and a seat on Lawrensons coaches! This would be the “Thank you” for the music centre and a birthday present for the 27th of July. My mates thought I’d gone daft, fancy going the game with a 25 year old dinosaur? They never knew the reason why?

Liverpool FC released the ticket arrangements and two tickets where eagerly purchased together with two seats on the Lawrensons charabanc. I was disappointed that the lads choose to go by soccer special rather than the coach. A visit to Ashe & Nephew that Friday night and a supply of the amber nectar was procured. Come the day of the game I felt sorry for my Mum, she made a mountain of butties, sufficient to sustain both of us for the journey there and back. The excitement built up and up deep inside, very little sleep was had that Friday night, we had to be at Stanley Road for an 8 O’clock departure, the two mile journey on the 28 bus seemed to take forever - the butterflies raced around my stomach whilst the excitement raced through my head.

Lawrensons where cheap and reliable, we boarded the coach in hope that one particular driver wasn’t driving us; in those days one of the drivers was a gruff Scottish man… “Please don’t let it be him” I thought, as the coach drivers left their little huddle and made their way to the coaches. My heart dropped as he boarded our coach and prepared himself to make way for our departure. This was the driver who a couple of years previous had taken us to Newcastle and took just under 5 hours, he never got above 3rd gear he was the original slowcoach. Once we’d picked up some of the lad’s from Kirkby the journey South was underway, no on-board toilets, no stopping off along the way, never mind this came with the territory. Ambling along the motorway, the butties devoured, the ale safely tucked in our tummies, time to read the daily papers and see what was going on. The Daily Mirror had a two page feature on both of the goalies [Ray Clemence and Jim Harvey] I was surprised to read that Jim Harvey wore contact lenses during the game [more about that later].

As time passed by many Leeds United coaches glided past us, I was envious of the coaches they always seemed to travel by “Wallace Arnold” top of the range with on board toilets, television and tea or coffee facilities, and drivers who would travel above 60 MPH. The people on our coach where in absolute agony, empty beer cans were used in some cases, but with each passing mile the pain increased. One of the Lasses managed to convince old Jockey to stop off for half an hour at Watford Gap, everyone legged it to the toilets [I’m certain the sighs of relief could be heard miles away.] The service station was full of Liverpool supporters we stood outside in the raging sunshine, stretching our legs in unison to bring back the circulation. This was years before Mad Lizzy and her aerobics?

A convoy of Wallace Arnolds pulled up, nine or ten coaches full of some of Leeds finest. The service station emptied as the Liverpool people surrounded the coaches “The Road End” echoed everywhere! An introduction just in case they didn’t know who we were. The Leeds supporters sat grim faced on their locked coaches as some of the Liverpudlians took the Mickey out of them, whilst some marvelled at the class of the Wallace Arnold coaches! We slowly boarded our coaches and made our way to “Anfield South.”

Seeing Wembley in the distance brought a huge surge of excitement to your heart, with each passing mile the songs seemed to get louder and sung with even more passion [if that was possible?] The excitement hit fever pitch as we pulled into the coach park next to the stadium and made our way to Wembley Way and walked up the ground amongst a throng of noise and colour. Sun bathing on one of the grassy knolls right next to our end, sipping a couple of cans of ale and having a laugh. Watching ticketless supporters climbing or bunking in brought a smile to the face, time after time this one lad would get past the first turnstile only to be escorted out by the police. He bunked in one more time, we laughed and waited for him to be escorted out again… he wasn’t to be seen again, he had reached his dream.

A mob of about 20 Liverpudlians ran up to our end and shouted “Leeds are coming around” everyone shot up on your toes and waited. The 20 or so where in bulk laughing their heads off – some wind up hey?

Wembley was the Mecca of World football, every player in the world wanted to play there in his life time, whist it may have been the Mecca, it was a dump outside. The car / coach park surface was made of pebbles, not the best thing bearing in mind the nature of some football supporters. The mesh and corrugated fences that ringed the car park had certainly seen better days and were in much need of repair.

Once inside the ground the heat and humidity struck home, the crowd that day was recorded as 67,000 with more Liverpudlians than Leeds United. It was strange because the songs seemed to echo around the stadium as if sung by many many more. This was the very first Charity Shield game to be played at Wembley, unfortunately this was also the very last time Bill Shankly would lead his much beloved Reds out.

Bill Shankly had handed in his resignation the previous week Bob Paisley was yet to be announced as our next Manager. Leeds meanwhile had also lost Don Revie for the England National job and his replacement Brian Clough stood aside to give Don Revie one last chance to lead his Leeds United side out. The noise reached a crescendo as Bill Shankly and Don Revie walked out [two good friends together side by side] the teams in single line followed behind them, the Liverpool sections of the crowd going absolutely stark raving mental in celebration and recognition like only Liverpool supporters can!

Boomed out from the travelling Koppites – The man himself raised one arm high in the air fist clenched to acknowledge his people. 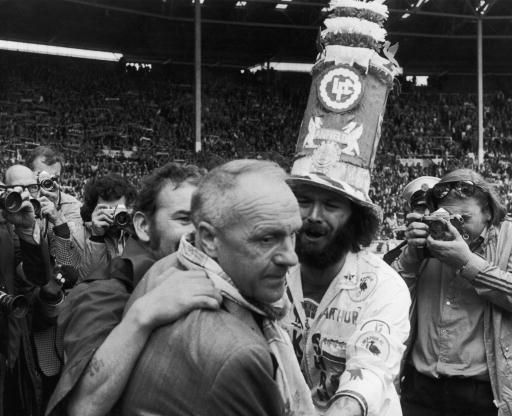 The teams were paraded to whoever, and “Abide with me” echoed through the tannoy system “You’ll Never Walk Alone” was sung for the umpteenth time that day. Sung very slowly [like it should be – none of this 100 MPH stuff like today?] straight from the heart!

The Liverpool sections where awash with Red and White whilst the Leeds supporters just stood silent to a man. “God save the Queen” was next, this was replaced with “God save our Team” the warm air and the slight breeze sending this rendition across North London for everyone to hear. Like gladiators preparing for the battle the Liverpool players ran to one of the goals stretching their fine toned bodies [no Lawrenson’s coaches for them?] The Leeds United teams under the Don Revie regime where always extremely well prepared and aggressive, this would be no friendly game – there was pride and a shield at stake.

Liverpool’s team that day was the same that had won us the FA Cup, apart from John Toshack who was injured. His place was taken by Kirkby born Phil Boersma – There was no place for Ray Kennedy who had been signed during the summer time. The game started off at a high tempo, crushing tackles flew in every direction no quarter asked and none given. Then on 20 minutes or so a hopeful high cross from Kevin Keegan was dropped by Jim Harvey, quick as a flash Phil Boersma stabbed the ball over the line 1.0 to the Anfielders. Once we gained our composure I can remember turning to Vic and saying “Don’t forget Jim Harvey wears contact lenses, he doesn’t like high crosses” we both smiled and celebrated some more.