What the players thought of Rome?

Terry McDermott (LFC player 1974-82): Rome will never fade from my memory. I’ll always remember it until the day I die, walking out into the stadium and seeing the red and white chequered flags, I’ve never seen anything like it and I’ve never seen anything again since. It was just atmosphere and an incredible feeling to see those fans. There must have been at least 30,000 Scousers there and it was just phenomenal. We walked on to the pitch about an hour before and thought ‘Christ, how can we get beat for these lot’ and obviously we didn’t.

Tommy Smith (LFC player 1960-78): The ’77 European Cup Final one was the one when I did notice the crowd. We went out to have a look what was going on in the Rome stadium and three-quarters of it was Red. I couldn’t believe it and it did hit you, ‘we’ve got more supporters than the Germans’ and bearing in mind it’s not that far away you thought that they would be there.

Emlyn Hughes (LFC player & captain 1967-79): I remember walking out onto the pitch before the game and I thought to myself ‘Jesus Christ we’re back in Liverpool!’ There were that many punters from Liverpool there, we were greeted by a sea of red and white. The support of the fans gave us all a terrific lift and all the lads were saying to each other how there was no way we could lose the match now. It was like playing at home. I can imagine what the Borussia players must have thought when they walked out. They must have looked around and thought they had no chance against such support. It must have seemed like they were playing at Anfield. 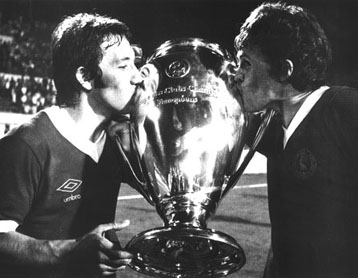 Joey Jones (LFC player 1975-78): There was one or two banners at Wembley that had made me laugh, but when I walked out in Rome’s Olympic Stadium and saw that one it made me feel about ten feet tall. The sight of all them Liverpudlians in Rome lifted me more than anything else. I honestly didn’t expect there to be that many of them there. They outnumbered the Germans by about three or four to one. It was amazing what some of them had done to get to Rome.

And here's to you, Billy Johnston
Liverpool loves the Crusaders more than you will know (wo, wo, wo)
God bless you please Rapid Bucharest
Liverpool holds a place for those we play,
(Hey, hey, hey, .... hey, hey, hey)

We liked to play CSKA or even Feyenoord.
We'd like to help them drink the night away (way, hey, hey)
Look around and all you'd see would be banners made of red.
The famous Kopites singing and drinking off our heads.

And here's to you Osvaldo Piazza
Bottles of red or white just a bob a throw (wo wo wo)
God bless you, please Zurich Grasshoppers.
Expensive but the girls were worth the pay,
(Or so they say, . . . hey, hey, hey)

Play it in a country East where no one ever goes.
Play it at Dukla Prague's little ground.
Skonta Riga, Dynamo Dresden, Honved or Liege.
Those teams now never come around

Allez allez les vertes St Etienne,
Moenchengladbach, Bruges we so miss you so (you hoo hoo)
Where are you now Polands’ Widzew Lodz
The teams Bob’s lads flew from Speke to play.
(Allez Allez Allez Allez)

Joe Fagan and his Mighty Reds
Strode into Roma’s Lion’s den, (way back then)
but we had Brucie and his wobbly legs
And smokin’ Joe took the Treble away,
(hey hey hey .... the Treble away)

Sitting on the sofa on a Friday afternoon.
Watching the Champions League draw come on through
Barca, Porto, Bayern, Mancs, the same teams once again
Ev'ry way you look at it, the fans still lose.

Where have you gone, St Etienne?
The Spion Kop still remembers you (you hoo hoo)
And we’ll sing You’ll Never Walk Alone
Until Europe falls to Liverpool once again
(to our Redmen, the Mighty Redmen)