With plans for a new stadium and its capacity still ongoing, it remains to be seen whether a Liverpool home match will have an attendance greater than that which saw an FA Cup fourth-round tie against Wolves in February 1952.

In the third round of the 51-52 season, Liverpool had seen off Workington with a 1-0 victory at Anfield. Their reward was a home draw against Wolves. This was the fifth time that the two sides had been drawn together in the FA Cup, but it was the first time that they had met at Anfield in the competition. It is interesting to note that in the four previous ties played at Molineux, when Wolves won they went on to reach the final (1896, 1939 and 1949).

Prior to this cup match, Anfieldâ€™s record crowd had been in another FA Cup fourth-round tie, this time against Tranmere Rovers on January 27th 1934. A total of 61,036 passed through the turnstiles. Tranmere had originally been drawn to play this match at home but then agreed to switch it to Anfield where the capacity was greater.

It was appropriate that Wolves provided the opposition to set the record as their own top crowd was for Liverpoolâ€™s visit to Molineux in an FA Cup fifth-round match in February 1939 when 61,315 paid to see them record a 4-1 win.

For Wolves Liverpool produced their typical programme of that period.  It consists of 16 pocket-sized pages with black print on white paper, the only colour being the red on the attractive front cover.  The club was obviously expecting a large crowd as the programme notes how busy their staff had been with requests for tickets and that they could have sold the available tickets eight times over.

Page two has "From the Boardroom" which comments on how unlucky Laurie Hughes had been in getting injured in the previous game against Aston Villa. This was unfortunate as two England selectors were there to watch him. Laurie had starred in England's ill-fated World Cup campaign of 1950, but injuries prevented him from making the centre-half position his own. He was at Liverpool from 1943 to 1960, making a total of 326 appearances. 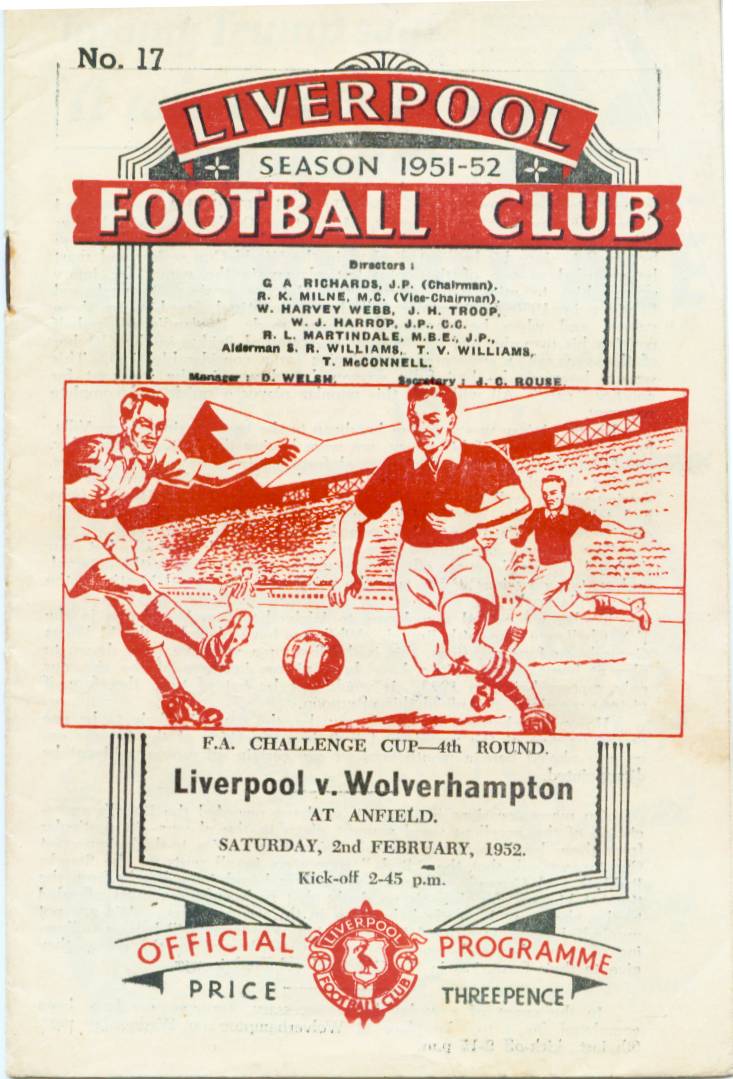 The programme also advised supporters that if a replay was required then it would take place on Wednesday 6th February with a 2- kick-off. Trains would leave Lime Street station at 10-35am with a third-class return fare to Wolverhampton costing 9/3d.

There is a welcome to Wolves and pen pictures of their players spread over four pages. The line-ups appear on page nine, showing Arthur Ellis as the referee. The remainder of the programme contains statistics, Liverpoolâ€™s post-war FA Cup results, league tables, attendances for the last three seasons, the half time scoreboard and many adverts (including Double Ace cigarettes and Higsonâ€™s Double Top beer).

Liverpool progressed through into the fourth round with a 2-1 victory, their goals coming from Bob Paisley and Cyril Done within the first nine minutes. They were then drawn against Burnley at Turf Moor in the next round. A match which ended in a 2-0 defeat.

The following Saturday after the Wolves game saw another Anfield attendance record created.  On February 9th a record crowd for a reserve match came to see the visit of Everton. This time 18,511 saw a 1-1 draw. Perhaps it was the fact that Albert Stubbins used this match as a comeback game which drew the crowds in. What makes this record reserve attendance more remarkable is the fact that Everton playing Leicester City at Goodison Park at the same time. A crowd of 40,535 saw that second division game.