The 1980-81 season proved to be very memorable for both of today’s sides due to the success that they achieved. Aston Villa claimed the League Championship whilst Liverpool lifted the European Cup for the third time and won the League Cup for a first time. It is this last achievement that provides a link between the two sides, as it was on Aston Villa’s ground that the trophy was lifted.

Liverpool drew 1-1 with West Ham United in the League Cup Final played at Wembley on Saturday 14th March 1981. This was a time when the final was played on a normal day of league fixtures and the League Cup was the only major domestic honour that the club had not won. They had reached the final once before in 1978, when they lost 1-0 to Nottingham Forest in a replay.

The replay against West Ham was played on Wednesday 1st April. The programme produced by Aston Villa provides a superb 32 page record of that historic victory. Right from the simply designed, but eye catching, cover, to the team line ups on the back page, it is packed with articles, photographs and details on the Wembley encounter as well as previewing that nights rematch. There are just two small adverts in the whole issue, one for the Hammers club shop and one offering one to three day air tours to Munich for the European Cup semi-final second leg between Bayern Munich and Liverpool (costing from £98). It was obviously compiled by a team who wanted to provide a lasting record of an historic occasion. 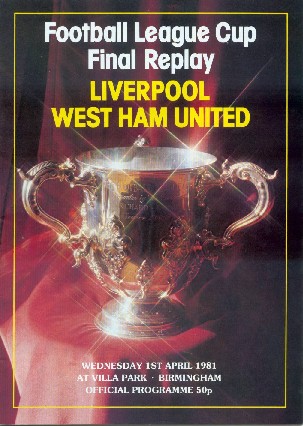 Both articles are dedicated to them. There are also two pages focusing on Liverpool’s goalscorer at Wembley, Alan Kennedy. His goal had come just three minutes from the end of extra time. West Ham equalised with a Ray Stewart penalty that proved to be the last kick of the game.

Kennedy admits that he was thinking that his name would be headlines in the papers the next morning. He only had to wait until the European Cup Final in May for this to happen.

Liverpool won their first League Cup by two goals to one with Kenny Dalglish and Alan Hansen hitting the net. In the team that night was a certain Ian Rush, making his second appearance for the Reds. His debut had been on December 13th away at Ipswich Town when he covered for Kanny Dalglish, wearing the number 7 shirt. His inclusion in the final came as a surprise to many, including the programme producers as he does not even merit a mention in the pen pictures of the Liverpool team.

One of the most popular areas in programme collecting is that of big match issues. The majority of programmes from Liverpool’s many final appearances are still very affordable thanks to the large print runs. This one now sells for around £3.

For more information on Liverpool programmes and memorabilia please send 2 x first class stamps for the latest bulletin of the Liverpool Programme Collectors Club. This contains many articles on past issues and news on current season programmes. The club has been established for over 17 years and exists to promote the enhancement of the hobby and the sharing of information on Liverpool memorabilia between collectors. Send to: Keith Stanton, 4 Hillview Gardens, Woolton, Liverpool, L25 7XE  (0151 42 86 087).