One of the most interesting areas to collect is the realm of the friendly issue. It is also one of the most challenging with many of the games seeing reduced print runs and smaller issues compared to the programmes produced for competitive matches. The post war period has also seen the growth of foreign tours which further complicates the task of obtaining a complete set of programmes.

Going back to the pre-war period, friendly matches were more thin on the ground, and typically involved games against Scottish or Irish sides. However, Liverpool did entertain FK Austria at Anfield in 1934 and also played against South Africa in the 1920s, as well as embarking on a number of continental tours.

One of Liverpool’s Scottish visitors were Hamilton Academicals whom they met on 15th April 1925, a Wednesday, with a kick off time of 3-15pm. Nowadays such a match appears quite strange, but in the 1920s Hamilton were quite a force in Scottish football. In the season of this friendly match they had reached the Scottish Cup semi-finals and were only defeated by Dundee after a replay.

Other links also existed between the two sides that help explain the fixture. A number of players had appeared for the Reds and the Accies at this time. One of these was Tom Miller who, between 1911 and 1921, played 146 times for Liverpool, scoring 56 goals. In the 1913-14 season he was the club’s top scorer with 16 goals. Whilst he was at Anfield he played once for Scotland, hitting two goals in a 5-4 defeat against England at Sheffield in 1920. He went on to play for Manchester United where he represented his country twice more. 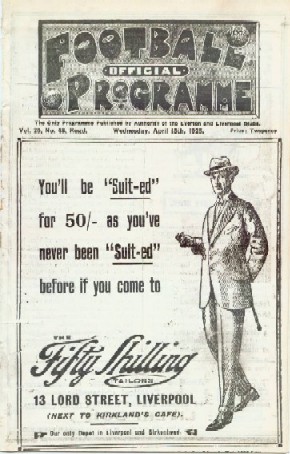 Tom’s brother, John Miller, also played for Liverpool. John appeared eight times in the 1919-20 season, including three matches where he appeared beside his brother. At the time of this friendly match John was on the books of Partick Thistle, but he was allowed down to play alongside his brother once again, but this time in the colours of Hamilton.

A further link between the two sides was that Hamilton’s coach, James Stewart, he had played for Liverpool between 1909 and 1914, making 63 appearances and scoring 26 goals.

Hamilton’s secretary-coach was A. Scott Duncan who had played for Newcastle United and won league and cup medals with them. Scott Duncan had a very interesting football career, he also played for Dumbarton and Glasgow Rangers. In 1932 he became manager of Manchester United, winning the Division Two championship with them in 1935-36. However, after 14 games of the 1938-39 season he resigned to become manager of Ipswich Town, who were then a Southern League side. Yet at the end of this season they were elected into the Football League despite finishing third in the Southern League. Scott Duncan remained with Town as manager until the end of the 1954-55 season when Alf Ramsey took over, however he stayed on as secretary for three more years. He also had the a testimonial match in his honour at the end of the 1957-58 season when Norwich City came down to Portman Road

For the visit of Hamilton, Liverpool produced their normal joint issue with Everton, consisting of 16 pages. Pages 2 and 3 contain the ‘Editors Note Book’ which commented on the previous weekends Scotland v England game, which Scotland won to take the British Championship for the 14th time. It also questioned the length of the football season and suggested “lopping off a week or two at the beginning and end.” Coming up to the Easter period Liverpool had three games in four days. Leading the table at the time were West Brom, Huddersfield and Bury.

Page 4 lists Everton’s fixtures and goalscorers as well as an advert for travel to the F.A. Cup Final using LMS, leaving Lime Street at 8-10am and arriving at Wembley at 12-15pm.

Page 5 lists Liverpool’s fixtures and goal scorers. Leading marksman at the time was Forshaw with 19 goals, a total to which he did not add to in what remained of the season. Even so he still finished up as top scorer. There was also another advert offering travel to the Cup Final, this time on LNER.

Page 6 welcome “Our Visitors” together with more adverts. Page 7 contains “Breezy Briefs” which comments on a lot of football news from the top division. The team line ups appear on the center pages. Pages 10 and 11 contain Everton and Liverpool “Jottings” respectively, which focused on the reserve sides. Page 12 continues the reserve reporting together with statistics on the Hamilton players.  Page 13 lists the league tables whilst the typical Higson’s Ale advert is on the next page. Page 15 was where the half time scoreboard appeared, but given that there were no other fixtures this remained blank. The back page has an article for Lewis’s store.

Overall a very good programme and one which is harder to find than normal league issues from this season. With pre-war Liverpool programmes now fetching at least £100 each, this programme would be worth at least double this.

For more information on Liverpool programmes and memorabilia please send 2 x first class stamps for the latest bulletin of the Liverpool Programme Collectors Club.  This contains many articles on past issues and news on current season programmes. The club has been established for over 17 years and exists to promote the enhancement of the hobby and the sharing of information on Liverpool memorabilia between collectors. Send to: Keith Stanton, 4 Hillview Gardens, Woolton, Liverpool, L25 7XE  (0151 42 86 087).