Unique Programmes: The Beginning of the League Cup.

Although Liverpool were late developers in the League Cup we have certainly made up for lost time – winning it a record seven times since its inception in the 1960-61 season. However, despite entering the competition in its first season, Liverpool chose not to compete again in it until seven seasons later in 1967-68. This lack of initial interest is also reflected in the programmes produced for the two home games in season 60-61.

Liverpool’s first ever League Cup match took place on 19th October 1960 at Anfield against Luton Town. The club, probably sensing a lack of interest from supporters (just 10,502 turned up), produced a much reduced programme consisting of four pages. This was the same size as their reserve team issues at this time. The front cover is of exactly the same style as all other home issues from this season, with the match details and token in the corner. Given that the normal first team programme consisted of 16 pages and cost threepence it seems hard to justify a four page issue at twopence! 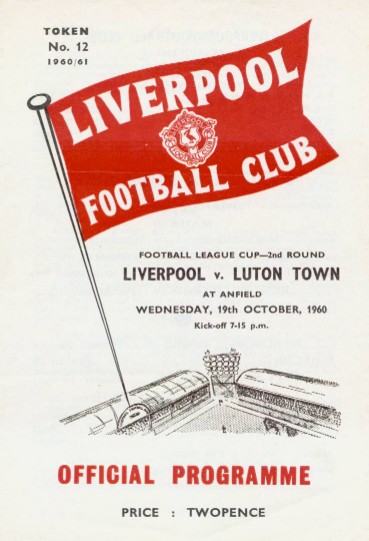 The nights line-ups for the 7-15pm kick off appear on page 2. Pages 3 and 4 have pen pictures of the Luton Town players and notices of forthcoming fixtures at Anfield.

The match ended 1-1 with Liverpool’s first ever League Cup goal coming from Tommy Leishman. He was a consistent performer for the Reds this season, missing two league games as Liverpool ended the league in third place and just missed out on promotion. In the next season when the second division championship was won he played in 41 of the games. However, after just 11 league appearances in the top flight the following season he was released by Bill Shankly.

Liverpool had already played Luton twice in the league before this cup match, drawing 2-2 at Anfield and losing 2-1 away. Revenge was gained in the replay five days later with a 5-2 win in front of 6,125 on a Monday night. The goals all came in the second half via a brace from both Kevin Lewis and Roger Hunt, with Dave Hickson adding the other.

In the third round Liverpool were drawn at home to Southampton. Again the club issued a reduced four page programme, available to the 14,036 who turned up to see a 2-1 defeat, with Roger Hunt getting the goal.

Given the low crowds and therefore print runs, the fact that most copies would have been folded and that it is now over 40 years since these games were played, make these very hard issues to obtain. As a result they are often found on many Liverpool collectors wants lists. If mint condition copies came up for offers they would fetch at least £100 each today, probably more. So although they were expensive at the time at twopence each they have certainly been worthwhile keeping.

For more information on Liverpool programmes and memorabilia please send 2 x first class stamps for the latest bulletin of the Liverpool Programme Collectors Club. This contains many articles on past issues and news on current season programmes. The club has been established for over 16 years and exists to promote the enhancement of the hobby and the sharing of information on Liverpool memorabilia between collectors. Write to: Keith Stanton, 4 Hillview Gardens, Woolton, Liverpool, L25 7XE  (0151 42 86 087).