David Fairclough can be proud of his scoring record at Liverpool. He scored 37 goals in 92 starts and 18 goals in 62 substitute appearances. Everybody knows what he was called at Liverpool. He hates that tag and LFChistory.net kept strongly in mind not to mention it! Fairclough was a key figure as Liverpool marched on to their first European Cup win, yet as the big day arrived, he did not have a part to play. Sadly, it proved to be a familiar situation for him at Liverpool.

My first memory of going to a game was going to a reserve game with my dad. I must have been 4-5. I grew up about half a mile from the ground and I went to school just 500-600 yards away from the stadium. Anfield was very much my patch. I played football in the streets and knew all the streets. Comic book stuff really. I remember standing in the street where we lived listening to the crowd in the Inter Milan game in '65. I was only 8 and my dad didn't allow me to go to that game. We knew obviously the game was going Liverpool's way and you could hear them singing. We lived literally in the shadows of Anfield.

My first contact with Liverpool was when I must have been about 12. I was playing in a little district tournament of the Anfield area in Stanley Park. A guy came up to me when I walked past the field and said: 'Can I ask you your name? I'm from Liverpool Football Club.' I was taken aback as I didn't know what this was leading to. They tried to hunt me down a bit. About four months later I remember coming back from a football game and my mom said: 'Where did you play today? Just after you went a man from Liverpool Football Club came to the house and wants to watch you play tomorrow morning.' I said that was disappointing as I'd scored four that day. He came in the morning to watch me play in a Sunday football league where I was playing with my mates in a knockout league and that was it.

You had quite an introduction to the first team, scored 7 goals in 14 games and virtually guaranteed the title.

That was in the '75-'76 season. It was obviously an exciting time to be put in because we weren't really in the running for the League title for much of that year. I only played the odd game, I made my debut vs. Dresden in the UEFA Cup. Then in the spring time, I started and scored a goal against Norwich and we won 1-0. That started a nice little run for me right to the end of the season.

Keegan and Toshack were a formidable partnership up front, but you had some opportunities in the team when Toshack was getting injured.

He was getting injured and he was having problems with his achilles tendon at the time. It suited the manager to take him off in the last 15-20 minutes which was a little bit fortunate for me in that sense. 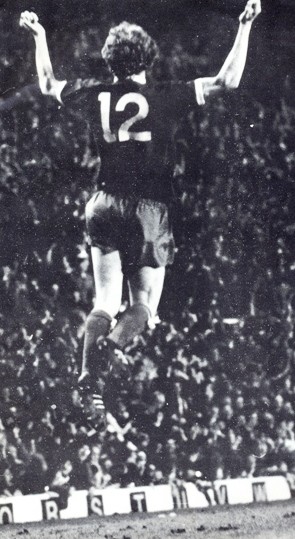 The 2nd leg against St Etienne in the 3rd round of the European Cup was clearly the highlight of Fairclough's career. Fairclough had come on as a sub in the 74th minute when Liverpool needed one goal to progress to the next round and in the 84th minute Fairclough scored the all-important goal.

The world must have been your oyster at the time...

After the game by the time I had done one or two interviews I met up with my parents and when we decided to leave the stadium it must have been quarter past ten. In those days pubs closed half past ten and we were just going to have a pint at the pub we used to go to. I looked over and it was jam packed with people. It was nearly half past ten so probably we wouldn't get a drink there so I just went home. Looking back it wouldn't have been any problem getting a drink, but I didn't think like that. I watched the highlights of the game on TV. I heard later all the guys were in town celebrating, but I was home watching the telly.

We told Fairclough the following story a Liverpool fan, called "BB" wrote once for LFChistory.net:

If you remember seeing an adrenaline propelled 14 year old running from Anfield to James Street Station, with blood coming from a leg wound, at about 9:30pm on March 16th 1977, please contact your local sports psychologist – for that spotty faced youth was me.

The date should well be embossed onto every true Red’s brain but, if you’re too young, the mention of David Fairclough should be enough.

The day (a Wednesday) had started grimly what with double Physics and a bastard of a Latin test, but, brandishing falsified ‘Please excuse my son from games’ documents, Neil Sampson, his brother Kevin, and myself, slipped quietly into Liverpool City Centre. Of course we had managed to get rid of the school clothes and there, waiting for the 26 bus at 2pm behind the Empire, stood three scallies with red and white scarves tied to our wrists...

We got into The Kop at around 6 and there, for three and a half hours, we were squeezed, bashed, mauled and pushed, something you don’t get now we all have nice plastic seats. I don’t think I need to go into detail about the game. Needless to say, I didn’t see David Fairclough’s goal, he had just controlled Ray Kennedy’s pass and got into the penalty area when it all went black. And that was that. Now we had to get out and get home but we couldn’t move.

Now, if anyone out there remembers The Kop how it was then get ready for a tear-jerking tale. At the top, in the middle, you had the choice of going left or right. On that night, I had no choice as, being about 2 foot shorter than all around me, I had to trust to luck – we went right. Then it happened. There, just at the top of the steps leading down and passed the bogs was a post, some 24 inches tall. These days, Health and Safety would have come down on such an obstacle like a proverbial ton of bricks but that night, it was my bollocks that hit it full on. Screaming with pain, I was lifted from behind by some massive red faced docker and carried to safety. The post had ripped my Brutus Golds and pierced the skin from inner thigh to knee as Mr Stevador yanked me skywards."

Fairclough: Down the years I have heard so many stories related to St Etienne. One of your key moments in your life. You remember everything about it and so many things happened to people on the night. It's showed so many times on television that it all feels kind of yesterday in a way.

The goal against St Etienne raised people's expectations about your career.

I didn't mind that expectations at all. I relished it really. Down the years I've had lots of time to think about why I didn't fulfill my potiental. Obviously Paisley had to keep 14-16 people happy, but he made life difficult for me. I broke into the England squad and I was very much on Ron Greenwood's list of players who were perhaps going to break in. I came back to Anfield and Bob Paisley decided to play me as sub or leave me out. I had a lot more to offer.

You scored against St Etienne and set Liverpool on its way to the European Cup Final, but you only warmed the bench in the final itself and a similar disregard for your services in the FA Cup final.

I was very disappointed. I played in the FA cup semi-finals against Everton, started both games and had all the celebrations to go to the cup final. Leading up to the FA Cup final day, Bob Paisley tells me I am going to play in the final. It never happened. He explains: 'You'll play next week in Rome, I'll need you in Rome.' Then in Rome I was sub.

Paisley reflected on his decision to leave out Fairclough at Wembley in his autobiography:

"On Friday morning we trained at Arsenal's training ground close by and then at lunchtime I announced the team. It was a moment I had been dreading, because I knew that for two men it would mean disappointment, and for one in particular it would mean heartbreak. Memories of the moment in 1950, when I learned I was left out of the Liverpool Cup Final side after scoring a goal in the semi-final, flooded back to me. My heart went out to Ian Callaghan, one of the greatest servants the club had ever had, when I named him only substitute, and I could have cried for David Fairclough, the hero against St Etienne, when I had to tell him that he wouldn't even be getting stripped."

Paisley went on to explain Fairclough's omission from the starting-line up vs Gladbach in the European Cup Final following the defeat at Wembley that he felt with Callaghan in the starting line-up Liverpool would have won at Wembley. So Cally was in and David Johnson went on the bench, alongside Fairclough who never came on in Liverpool's 3-1 victory over Gladbach. A double personal disappointment for Fairclough completed after contributing so much to Liverpool's best ever season.