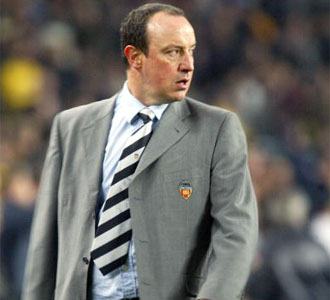 Rick Parry and the Liverpool board had one man particularily in mind when replacing Gerard Houllier. His name: Rafael Benitez.

Valencia had not won the Spanish title since 1971 when Rafael Benitez took over from Hector Cuper in June 2001. Valencia was doing well in Europe reaching two successive Champions league finals, failing to win either of them. Valencia only managed 5th place in Cuper’s last season, 17 points behind champions Real Madrid, after finishing 3rd the season before. Valencia’s fans expected a big-name appointment following Cuper’s move to Inter. Benitez wasn’t Valencia’s first-choice, but probably the board was later relieved they were denied by more illustrious names.

Benitez' Tenerife were promoted to La Liga in 2000-2001 in his first season and fans were not at all familiar with this talented young coach. However Valencia fans who had felt Cuper’s approach to the game was too cautious, were soon won over by Benitez when he introduced a more attacking style. Ruben Baraja, Pablo Aimar, Fabian Ayala and captain David Albelda who became the basis of his team had been bought the previous season. However the club's stars; Gaizka Mendieta and Claudio Lopez had left for Lazio. Benitez brought with him two players from Tenerife, Migel Angel Mista, who finished as Valencia’s top scorer in 2003-2004 with 19 goals and right-back Cristobal Curro Torres, who is now an established Spanish international. Benitez kicked off his Valencia career in style by beating Real Madrid 1-0 on the 25th of August 2001. His rotation policy caused a few upsets, sometimes resting his best players, but he was confident his system would get the results. Benitez’ tactics earned Valencia their first title in 31 years, winning it by a good margin of seven points over Deportivo La Coruna.

Valencia failed to follow up to their title success. Benitez' team finished only fifth in the 2002/03 season, 18 points behind Real Madrid and with 15 points less than the season before. Benitez' first season in the Champions league proved to be a valiant effort, but fell short of his own ambitions. Valencia were paired with Liverpool in the Champions League first group phase. Valencia defeated Liverpool 2-0 and 1-0 but were knocked out in the quarter-finals by Inter.

Rafael Benitez was born on the 16th of April 1960 in Madrid. He started out as a player at Real Madrid, but left 21 years of age. He played in the lower divisions for a few years, but a knee injury forced him into early retirement as a player. He joined Real Madrid's coaching staff in 1986, working with the youth squads and managing Real Madrid’s B team for two years. In 1995 he left Real for unsuccessful spells at Valladolid, sacked after two victories in 23 games in La liga and 1st division Osasuna, sacked after just one victory in the first 9 games. He finally had some degree of success when he led unfancied Extremadura into La Liga in 1997. Extramadura only played one season in the top flight, finishing 17th and losing to Valladolid in a play-off. Benitez wanted to learn more and he took one year off in 1999 to study training methods at Man Utd, Arsenal and in Italy.

Benitez began preparations for the 2003-2004 season under a cloud. Valencia’s Director of Sport Jesus Pitarch, refused Benitez plea to finance a proven goalscorer and signed instead against his wishes winger Néstor Canobbio. Benitez was outraged: "I asked for a sofa and they bought me a standard lamp". 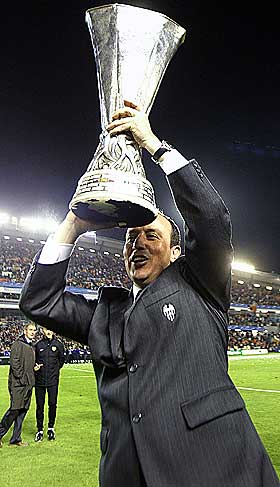 Despite difficulties, Benitez’ side was crowned champions with three games to go and he was obviously delighted: "A month ago it looked pretty hopeless. We were eight points behind Real Madrid. But we never lost focus and knew this was a marathon. The team is a great long-distance runner and maintained a very high rate of form for a long period of time. Two championships in three years isn't easy - especially for a club of Valencia's size. But we have great professionals, who are also great human beings. This has helped us enormously."

Valencia's achievements didn't end there. Valencia beat Marseille 2-0 in the UEFA Cup final and a very successful season was in place. Valencia offered Benitez a better deal after Liverpool's interest was evident, but it was too late. He had decided to go to Liverpool.

"My ideas are near to the Milan of Arrigo Sacchi, I like technical and aggressive teams that don't allow the opponents to play. I like teams that play the ball with speed and look to score with as few passes as possible. My Valencia team is a mixture of youth and experience."

Guillermo Balague, Sky Sports’ analyst in Spain and self-confessed Liverpool fan is delighted with Benitez’ capture: "He was at one point obsessed with detail but he has corrected that and improved his relationship with the players. He got rid of the players that he thought weren't with him and has stuck by those who were committed to his style of management. Since then they have reaped the benefits with success both at home and in European competition.

His teams might be solid at the back but they are certainly given a licence to attack. He is a studious person and a very scientific coach. He uses computer technology to monitor his players' diets and physical development, and is keen to discover how he can apply computers to his football. He still maintains a little distance between himself and his players and is a disciplinarian. There is a famous story of him banning his players from eating paella on Sundays, which is a Spanish tradition. I would take him above every other coach in Europe. He speaks very good English. He would have no problem communicating with the players. He is a football man, a very big football fan and is a fan of English football.

Liverpool would become like the great AC Milan team. Defending as a unit but always attacking as one as well. He would change Liverpool and he would make them a force again. He appreciates English football and knows all about Liverpool. He is still young for a manager and would enjoy the challenge of taking over one of the great teams in football. I am confident he would be a massive success at Anfield."