5 league titles and a packet of crisps 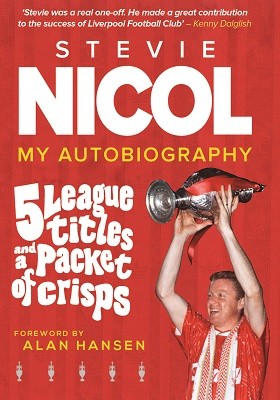 Steve Nicol has always been a certainty in my best ever Liverpool XI. His ability to slot into any position without fault was an incredible strength to have. He would be my left-back to complement John Barnes. What a left flank we had in the late 80s. As soon as I got word that Mark Donaldson at ESPN was writing his colleague’s memoir named appropriately, "5 league titles and a packet of crisps," I was very excited to see the finished product, but in a way I had already been told the various misadventures of perhaps not the brightest person to have worn Liverpool’s shirt (by his own admission). Alan Hansen enjoyed telling Nicol stories and I have heard numerous stories in my private conversations with his former teammates (who acted them out as well) that unsurprisingly are not included in the book as they are not really suitable for print, but wonderful to listen to.

The book is a very entertaining read with plenty of hilarious anecdotes, but what really stands out for me is Nicol’s disarming honesty about his drinking problems that escalated dramatically after the Hillsborough disaster that not only influenced him as a person, but changed him as a player. Nicol was voted the best player in the league by the Football writers in the 1988/89 season, but he didn’t enjoy his football as much after that campaign as a result of what he witnessed at Hillsborough.

“I should have left Liverpool long before I did. That sounds like a terrible thing to say, but it’s true. I loved the club, still do, always will, but I simply could not rid my mind of Hillsborough,” Nicol says in the book. “Everything I had done before April 1989 was simply geared towards playing my best on the Saturday. But from the end of that season and until I left, I was not the same player or anywhere near as focused as I was before Hillsborough.”

Nicol tells us about visiting the family of Jon-Paul Gilhooley, the youngest person to die at Hillsborough, only 10 years of age, the cousin of one Steven Gerrard. Nicol simply didn’t want to show up at the funeral, that was to take place the following day, without meeting his family beforehand. Nicol and his wife, Eleanor, still keep in touch with some of the victims' families.

After Nicol left Liverpool in 1994 after 13 years as a Red he eventually made his name in the States as a coach with the Boston Bulldogs and New England Revolution. He currently resides in Hopkinton, Massachusetts, just west of Boston and works as a pundit for ESPN.

Nicol’s and Donaldson’s book is a cracking read not only for the entertainment value but its refreshing honesty. "5 league titles and a packet of crisps" is published by Sport Media.