Declan Sloan has put together a complete record of every South American player to wear the famous Red Jersey, from Mauricio Pellegrino in 2005 to newly recruited Roberto Firmino.

Roberto Firmino’s arrival this summer from 1899 Hoffenheim made him the 15th South American to represent Liverpool. This is including; Gabriel Paletta, although he was born in Argentina, he is now a full Italian international and Mark González, born in South Africa but the winger moved to Chile when he was just ten years old.

Firmino’s homeland Brazil has supplied the most Liverpool players with six of the fifteen originating from the land of samba. However, not all of our South American recruits have been a success. The reds have plundered some of the best youth talent and maybe have failed to develop them into the players they originally had the potential of being.

"The most important thing is the head of the player," says Christian Rapp, who heads the Brazilian-based operation of a German company that specialises in looking for talented youngsters. The player who wants to have a career abroad needs to make the adaptation to his country and club, not the other way round. This is the big explanation for some cases working out while others don't."

It wasn’t until January 2005 until the first South American joined Liverpool in the form of experienced Argentinian defender Mauricio Pellegrino. Having played under current boss Rafa Benítez when he was in charge of Valencia CF, it was hoped he could prove a decent short term acquisition and provide adequate cover for his first choice centre-back pairing of Hyppia and Carragher. Pellegrino made 13 appearances in all but was released in June 2005, returning to Spain to join 2001 UEFA Cup runners-up, Alaves.

Benítez, however, later added him to the backroom staff at Anfield in 2008, where he worked with him until his own career at the helm ended in 2010. Mauricio's best performance in a red shirt was a 2-1 win against Everton in March 2005 as the Reds fought it out with the Blues for a top four spot. Pellegrino is currently the manager of Liverpool’s 1984 Intercontinental conquerors Independiente, after engaging in short spells coaching Valencia CF and Estudiantes.

Our second South American signing was highly rated Mark Gonzalez. His move initially was stalled due to work permit issues but he finally arrived at Anfield in the summer of 2006. He made an almost instant contribution to the team with a late winner in a Champions league qualifying round match against Maccabi Tel Aviv to ensure Liverpool’s place in the group stages.

There was no doubt that the Chilean was a talented individual. Nevertheless, his time at Liverpool was destined to be short lived and ultimately could be called a failure. Only making 36 appearances and just 3 goals, Benítez had seen enough and ushered him towards the exit door and joined Real Betis in 2007.

In the same summer of Gonzalez’s arrival, came the double swoop of; Argentinian Gabriel Paletta and Brazilian left-back, Fabio Aurelio. Paletta arrived with high hopes after starring for the Argentina U-20s side alongside Lionel Messi.
Paletta, like many other young South Americans, who chanced their luck in proving themselves in the Premier League, turned out to be a step too early in his career, especially coming straight from his homeland. The pace of the English League can be an unforgiving environment. One of which the young Argentine soon found out by making only eight appearances in all competitions. Nevertheless, Credit to Paletta, after returning to Boca Juniors he then was given another shot at European football as he made his way to Serie. In Italy he became a consistent performer with Parma which even earned him a call up to the Italian national side.

Fabio Aurelio’s arrival on a free transfer looked to be a shrewd piece of business by Benitez. Unfortunately, for both player and club injuries blighted his time at Anfield.
His six seasons at the club saw him only make 87 appearances with 2008-09 being his best. Two goals in that season really stand out. Aurelio left his mark on Old Trafford as he clipped in a lovely free kick as the Reds beat their arch enemies 4-1 which reignited their title bid. He just about topped that a month later, when he outwitted Chelsea’s Petr Cech with a cleverly disguised free kick which got Liverpool back into their Champions League Quarterfinal tie against the London side.

Injuries though were a constant running theme during his LFC career and was ruled out in the summer of 2009 when he went down to a freak injury whilst playing football with his son. From his Liverpool peak of the 2008-2009 season he only managed to play another 30 league games in the next three seasons. He left the club when his original contacted expired, refusing Liverpool's offer of a new pay-as-you-play deal. However, he incredibly resigned months later when new manager Roy Hodgson joined Liverpool in 2010. Despite been given another crack of the whip, unfortunately, injuries kicked in again and his last appearance for the Reds was in May 2012 as a Martin Skrtel OG saw Fulham record a rare victory at Anfield.

Argentinian Javier Mascherano was the next foray for Benitez and Liverpool and one who would prove to be the first truly successful South American import. Javier joined the Reds on loan in February 2007. Mascherano like his compatriot Carlos Tevez had ended up at West Ham Utd via a third party ownership deal arranged by international football fixer Kia Joorabchian. Mascherano was mostly confined to a substitute role, only appearing seven times for the Hammers and when Benitez came calling he was more than happy to swap London for Liverpool. 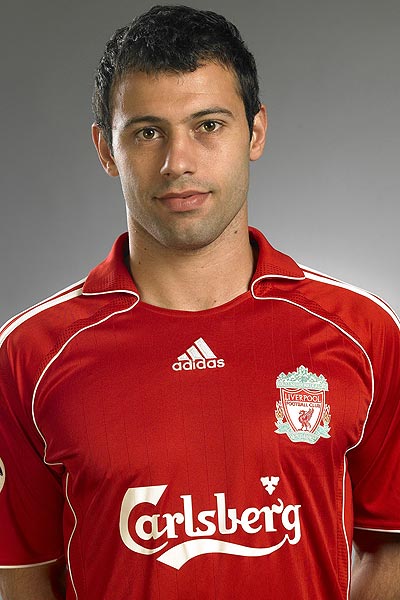 'El Jefecito' became a firm favourite with the Anfield crowd with his tough tackling and excessive work rate. Liverpool finally signed him a year later in a permanent deal worth around £17m. During his four seasons at the club he managed 139 League and Cup appearances, scoring just the two goals.

He did find himself red carded on a number of occasions, most notably when he took umbrage at his teammate Fernando Torres receiving a yellow card at Old Trafford from referee Steve Bennett after he felt the Spaniard was being targeted by United defenders.

With Benitez’s departure in June 2010 the end of Mascherano’s career at Liverpool was also coming to an end. Barcelona had already tried to lure him to Spain the previous summer and with new coach Roy Hodgson now in charge he decided it was time to depart. It was a blow to Hodgson whose own Liverpool career was to be short lived which wasn’t helped by losing such a key player in Javier.

Moving on, Brazilian Lucas Leiva followed Mascherano's arrival on Merseyside just a few months later in May 2007. Unlike, the Argentine who was given the thumbs up by most of the Liverpool crowd, the young Brazilian player of the year's arrival from Gremio for £5m, very much divided opinion.
At times, the Brazilian was used as a scapegoat to attack Benitez when elements of the crowd felt he didn’t merit selection in a team with designs on winning the title. It was tough on Lucas who conducted himself in a professional manner even when supporters were on his back.

The quintessential Brazilian player is usually viewed as someone who has plenty of flair and goals. However, Lucas was far removed from that romantic stereotype. Nonetheless, this didn’t mean he wasn’t of any value to Liverpool and Benitez.

It is testament to his character that he is now just one game short of 200 league appearances for Liverpool. Especially, taking into account the early part of his career which looked unlikely he would even reach 20 appearances given all the negativity which surrounded him. When the passing genius Xabi Alonso departed for Real Madrid Lucas had his best spell at Liverpool and became a key player in Benitez’s final season at the club.

In echoes of Fabio Aurelio just when it looked like he had established himself, a bad injury was just around the corner. In November 2012 during a cup tie at Stamford Bridge he damaged his cruciate ligament which ruled him out for the remainder of the season. His comeback game against Man City at the start of 2012/13 season saw him last only five minutes before succumbing to injury. He didn’t return until December 2012 but still managed to play 31 games in all competitions. Finally, Leiva made his 250th appearance in the Bernabeu last November and has managed to feature on 61 occasions for Liverpool in the previous two seasons.