Walshy - Wouldn't It Be Good


Trinity Mirror Sport Media has just released the autobiography of Paul Walsh, titled "Wouldn't It Be Good." Cockney Paul rebelled against his dad who was a Hammers fan and became a dyed-in-the-wool Arsenal fan. Paul had an insatiable will to win but struggled initially against the emphasis made on strength and size in British footballers rather than skill and technique that he had in abundance. He was never there just to make the numbers and would always stand his ground and tell those who stood in his way bluntly what he thought of them. Walsh was admittedly a bit of a lad who was popular with the ladies and liked to have a drink and if you have never been acquainted with the F and C words, don‘t worry, you‘ll see plenty of examples of their use in his story. Walshy would find himself very comfortable in the presence of expletive-ridden John Aldridge and Tommy Smith.

PFA‘s Young Player of the Year got himself a dream transfer from Luton Town to League champions Liverpool in May 1984. Walsh‘s eagerness to join his new club cost him his England career. Frustrated by the inept physio department at Liverpool and shocked by the Heysel drama, Joe Fagan‘s departure as manager left Walsh in the curious position that the man he was supposed to eventually replace in the team was now his boss; one Kenny Dalglish. Walsh was on fire in the 1985/86 season having scored 18 goals in 25 games when disaster struck when he ruptured his ligaments in February and was virtually a spectator as Liverpool won both the League and FA Cup. He was still included as one of Liverpool‘s two representatives in the PFA‘s Team of the season, the other being Mark Lawrenson.

"One high-profile game I did play in was in the first leg of the Littlewoods Cup semi-final against Southampton at The Dell in February 1987. It was a bad-tempered game and I was in a frustrated state of mind because the goals had dried up for me. So when I got the ball from a throw-in and was clattered from behind by Kevin Bond – who stuck his studs right down my back for good measure – I wasn’t best pleased.
We had a bit of a grapple but no more as I backed into him and though it was handbags at that point, he crossed the line when he leant in and spat in my face. I checked to see that the ref wasn’t looking and then turned around and smashed him as hard as I could in the face. What I hadn’t noticed in my eagerness to plant one on him was the linesman, who was stood about five yards away and saw the whole thing.
Bond went down and I didn’t have a leg to stand on. I was sent off and I was waiting for my bollocking in the dressing room when Kenny walked in after the final whistle. We’d drawn 0-0 and he said, ‘Wee man, you know you were wrong don’t you?’ I nodded, waiting for the inevitable, then he said, ‘But if there’s one person I don’t mind you smacking, it’s that twat.’" 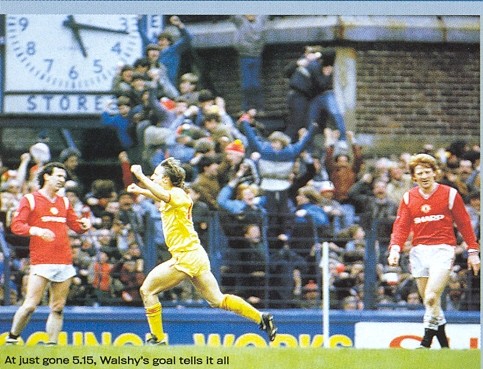 
Walsh doesn‘t pull any punches and his interactions with Dalglish and Grobbelaar at Liverpool and Ray Clemence at Tottenham are an interesting read as well as his accounts of the club‘s drinking culture that he revelled in. Walsh's injury jinx struck again in the 1986/87 season and he struggled for goals as he claimed he was too tired to perform to the best of his ability. The arrival of John Aldridge, John Barnes and Peter Beardsley in 1987 signalled the end of Walsh's Anfield stay that he admitted he handled in a very unprofessional manner.

Walsh was only 25 when he joined Tottenham to resurrect his career but the bright lights of London led the way and the arrival of one Paul Gascoigne hardly calmed matters. He even admits he was effectively a waste of space at Liverpool and Spurs over a period of two and a half years. Walsh had a resurrection of some sorts at first division Portsmouth before gracing the Premier League with his presence at Manchester City. Walsh returned to Pompey where he ruptured his anterior cruciate ligament and his career was over at 33 years of age.

Paul Walsh‘s telling of his story with ghost writer David Clayton is quite entertaining, yet shocking at times and Paul won‘t probably mind me saying that he‘s a funny little f***** though he isn't necessarily a likable person. The overriding feeling is one of sadness because Paul could have gone way further in the game if he had kept himself on the straight and narrow and it‘s a real shame as he had a promising career in front of him.

Paul Walsh's book is published by Trinity Mirror Sport Media and can be ordered on Amazon.