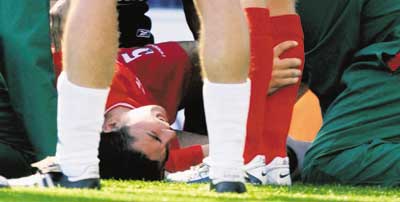 Fortunately it´s not too common for footballers to break their legs. Other injuries are more common in this profession. But in one game this season two Liverpool players left the pitch with broken bones. The game against Blackburn at Ewood Park on 13th of September 2003 proved costly. Milan Baros broke his ankle after Markus Babbel accidentally tackled him badly. A short while later Jamie Carragher broke his leg after a terrible tackle from Lucas Neill. Two Liverpool players had left the pitch with broken bones and half time had still not arrived. Liverpool won the game 3-1 but victory was gained at a big cost.

The season 1986/87 proved costly for two Liverpool players. Liverpool won the league and the FA Cup, the famous Double, in 1986. Jim Beglin and Kevin MacDonald played important roles during this victorious season. Jim was bought from the Irish team Shamrock Rovers in May 1983 and proved to be Bob Paisley's last signing. He had broken into the first team in the season 1984/85 and made the left back position his own in the season after. The famous left back Alan Kennedy knew his time was up and left the club for Sunderland during this season. Jim was also first choice left-back for the Irish national team. Most experts agreed that Jim was one of, if not the most, promising left-back in Britain at the time. Jim's career was just about to start.

Kevin had been bought from Leicester in December 1984 by Joe Fagan. Joe was looking for a playmaker to replace Graeme Souness and wanted to try Kevin out. The Scot had been settling in Liverpool's midfield and played a big role in the season´s final weeks which led to the Double in the spring of 1986. The future looked very bright for those two during the summer of 1986.

Both Jim and Kevin were in the first team when the 1986/87 season started. But that situation was going to change. On the 20th of September Liverpool played in the autumn sun against Southampton at The Dell. Liverpool lost 2-1 but there were more bad news than the result coming from that game. Kevin MacDonald, just on as a sub, broke his leg in two places after a tackle from Mark Dennis. Kevin was gutted to be out injured but didn't want to blame Mark. "I know it was an accident and accept no-one was to blame." Kevin had as a matter of fact broken his hand in January earlier in the year so this was the second time that year the Scot had been away because of broken limbs.

It took Kevin a long time to recover. In fact he needed a second operation on the injury in April 1987. When he finally returned to football he couldn't get into the first team at Anfield. He played one game in the 1987/88 season and six during the next one. He tried his luck on loan at several clubs before he left Liverpool for good to join Coventry during the summer of 1989. He played 64 games for Liverpool and scored five goals. Here is a Shoot! focus on MacDonald shortly after his arrival at Liverpool. 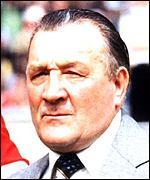 On the 21st of January old foes Liverpool and Everton met in the quarter-finals of the League Cup at Goodison Park. Liverpool won 1-0 with a goal from Ian Rush. But a terrible injury to Jim Beglin put a shadow over the victory celebrations. Jim broke his leg after a very hard tackle from Gary Stevens. Bob Paisley admired the young Irishman: "He has the ideal build for a full-back. He's a strong kicker of the ball. He's naturally left footed. He has bags of guts and determination but above all, he wants to improve. And if they're prepared to listen, then we're prepared to tell them." Paisley was deeply saddened by his injury: "The injury he suffered at Goodison Park at the start of the year was as ill timed, as it was painful. It was painful to look at, never mind to experience. I've seen one or two broken legs in going on fifty years in the game, but not one made me really wince, Jim's did."

Jim had played 98 games for Liverpool and scored three goals. He never did play for Liverpool again. In the summer of 1989 he joined Leeds where he managed to play in the team that was promoted into the old 1st division in 1990. But he was forced to quit football in 1992: "My right knee was like a time bomb waiting to explode and eventually it did."

Jim and Kevin went different ways since they stopped playing football. Both are though still working in football. Jim works as a football expert. He is well respected in the media and has worked for both radio and television. Kevin is still in the game and has worked as a football coach. At present he's the coach of Aston Villa's reserve team which he led to the reserve team title this spring. Both Jamie and Milan are back on track after recovering from their breaks. The early signs are good. However Jim and Kevin were never the same players again and never managed to put their mark on Liverpool's first team as they did before their bad breaks.