On Good Friday 1915 Liverpool and Manchester United met at Old Trafford. United were in great danger of being relegated, but Liverpool were in a relatively comfortable position neither challenging for honours nor facing the threat of relegation. Liverpool seemed out of sorts on the day and United won the game 2-0. United were 1-0 up at half-time and as Liverpool Daily Post reported: "A more one-sided first half would be hard to witness." Liverpool defender Bob Pursell conceded a penalty by handling the ball in the 48th minute. Patrick O'Connell missed the penalty by some distance. George Anderson added United's and his second in the 75th minute. The Sporting Chronicle wrote "The Liverpool forwards gave the weakest exhibition in this half [the second] seen on the ground during the season." Despite conceding two goals, Elisha Scott performed excellently in goal and forward Fred Pagnam was dangerous for Liverpool hitting the crossbar in the second half, and seemingly almost chastised by a colleague for trying to score a goal. The Manchester Daily Dispatch reported, maybe most tellingly: "The second half was crammed with lifeless football. United were two up with 22 minutes to play and they seemed so content with their lead that they apparently never tried to increase it. Liverpool scarcely ever gave the impression that they would be likely to score." 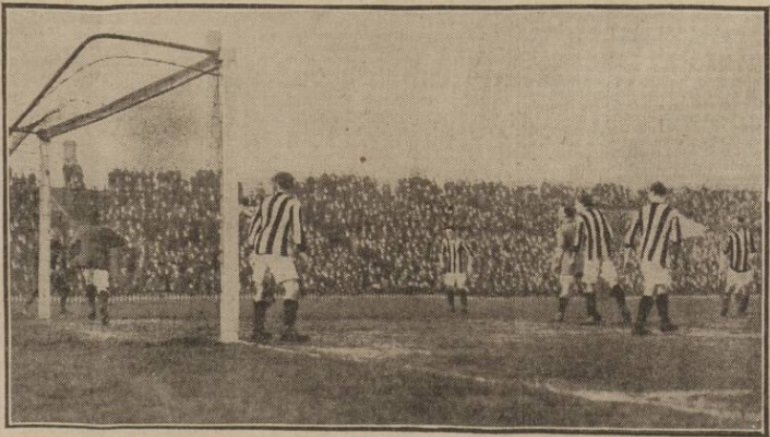 Action image from the controversial match

Within a fortnight a couple of newspapers implied that the result had been decided beforehand. Bookmakers had laid odds up to 8-1 against United winning 2-0 and a suspiciously large number of bets had been made on that very scoreline causing the odds to shorten to 4-1. The two points United "earned" from that game were enough to earn them 18th place and safety, one point ahead of 19th-placed Chelsea, who were nominally relegated. The Sporting Cronicle published a notice from a bookmaker called "The Football King" who promised a substantial reward for information that would lead to punishment of the "instigators of this reprehensible conspiracy": "We have solid grounds for believing that a certain First League match played in Manchester during Easter weekend was ‚squared‘, the home club being permitted to win by a certain score." Consequently the Football League decided to further investigate these claims.


The investigation dragged on in the latter half of 1915 when players who took part in the game were interviewed one after another. Some papers suggested despite the fact that several bookmakers were badly hit by the 2-0 scoreline it was a pure coincidence and foul play among the players could not be proven. On 27th November 1915 "Wanderer" in the Manchester Cronicle claimed after having talked to several players who had just given evidence "there is reason to believe the inquiry has taken a very serious turn. It has been stated, I believe, and with some pretence to authority that the whole thing would end in smoke and that no suspensions would follow – that the indictment would be found not proven. That is not my information."


Finally on 23rd december 1915 a verdict had been reached by the Football League's Good Friday commission: "It is proved that a considerable sum of money changed hands by betting on the match, and that some of the players profited thereby. Every opportunity has been given to the players to tell the truth, but although they were warned that we were in possession of the facts some have persistently refused to do so, thus revealing a conspiracy to keep back the truth. It is almost incredible that players dependent on the game for their livelihood should have resorted to such base tactics. By their action they have sought to undermine the whole fabric of the game and discredit its honesty and fairness."

"We are bound to view such offences in a serious light. The honesty and uprightness of the game must be preserved at all costs, and although we sympathise greatly with the clubs, who are bound to suffer seriously, we feel that we have no alternative but to impose the punishments which the players have been warned over and over again would be imposed. We are satisfied that the allegations have been proved against the following: J Sheldon, RR Purcell, T Miller and T Fairfoul (Liverpool), A Turnbull, A Whalley and EJ West (Manchester United), L Cook (Chester) and they are therefore permanently suspended from taking part in football or football management, and shall not be allowed to enter any football ground in the future. There are grave suspicions that others are also involved, but as the penalty is severe we have restricted our findings to those as to whose offence there is no reasonable doubt."

The Liverpool four found guilty of match-fixing:
Jackie Sheldon, Tom Miller, Bob Pursell and Thomas Fairfoul.
Jackie Sheldon, who was said to have been the go-between the Liverpool and Manchester United players, sent a letter to Athletic News which was published 10th April 1916 while he was fighting in the world war in France: "I emphatically state to you, as our best and fairest critic, that I am absolutely blameless in this scandal and am still open, as I have always been, to give any Red Cross Fund or any other charitable institution the sum of £20 if the FA or anyone else can bring forward any bookmaker or any other person with whom I have had a bet. Assuming I return safely from this country I intend taking action against my suspension." In September 1916 Sheldon wanted to go to Anfield to watch Liverpool play Burnley and even though he was banned was granted free admittance as a wounded soldier, but told to stay away from the dressing-rooms.

When Sheldon testified in Man Utd's Enoch West's case in 1917, he confessed his guilt. Sheldon told the court that he convinced his team mates to play along and had met with United players: West, Turnbull and Whalley to decide the outcome of 2-0, with one goal scored either side of half time. Bob Pursell also confessed to taking part while during the same hearing Fred Pagnam revealed that he had been offered £3 by Sheldon in a taxi en route to the match. Pagnam threatened to score in the game despite threats from the ringleaders. Ephraim Longworth and Donald MacKinlay both testified that they had been aware of the plot, but like Pagnam refused to take part.

John McKenna, the chairman of Liverpool from 1909-1914 and current director of the club as well as being the chairman of the Football League admitted he had been in an awkward position in this whole matter: "I created the Commission which sat upon the case and so long as the party was found guilty of an offence there could be but one decision – they had to be ousted from the game of football. My position as Liverpool director made matters a trifle awkward. Personally I am sorry that the players, and particularly those connected with my own club, have been so callous as to bring this discredit on the game. I regret that the decision did not come earlier for we have been engaging men to appear in our team who had we known their connections with this affair would not have been offered the slightest sympathy. We would have had no dealing with them in any shape." (27th December 1915 – Daily Dispatch)


The return of the Liverpool four

On 2nd June 1919 all four Liverpool players were offered a pardon providing that they apologised for their part in the scheme due to the FA's "high appreciation of the great sacrifices and services of its members during the war, and the deep gratitude for the success which has been achieved."

The Liverpool players apologised and were pardoned. Thomas Fairfoul quit playing altogether and the war had taken away the best years of Bob Pursell's competitive playing career. He returned to Anfield after Peace was declared., but fractured his arm in the first practice match of the 1919-1920 season and wasn't ready for action until December when he was picked in consecutive First Division games against Manchester United & Everton. However these proved to be Pursell's only first-team appearances that season and he joined Port Vale in May 1920. Tom Miller scored 13 goals in 25 starts in the 1919-20 season and after starting the following season by scoring three goals in his first two games, he was strangely enough transferred to the other team involved in the Good Friday scandal, Manchester United, in September 1920. Sheldon had two more good years at Anfield when the war was over, missing just 5 and 7 league fixtures respectively during those two seasons.