The idyllic village of Glaslough in County Monaghan, Ireland, was the perfect setting for the unveiling of a commemorative plaque in honour of Liverpool FC's first manager John McKenna on Saturday evening.

Like thousands of other Irishmen of his generation, McKenna had to emigrate to look for work and all Reds supporters should be thankful that he chose Liverpool as his port of call as the club we know and love today may not exist in its present form if it wasn't for the influence of one "Honest" John McKenna.

A crowd of over 200 Liverpool fans and interested observers attended an informative talk on McKenna by Keith Falkiner, author of the book Emerald Anfield, in the local community hall before the plaque was unveiled by the brainchild of the event, Kopite and LFC Donegal secretary David Moen. 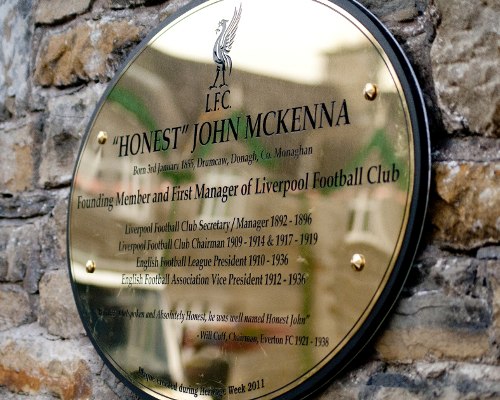 At the conclusion of his talk, Falkiner summed up the achievements of McKenna perfectly when he said; "The course of history has proven John McKenna to be one of the most powerful and successful men at Liverpool Football Club - the third most important figure, in my opinion, after only Bill Shankly and the clubs founder John Houlding. The people of Monaghan should be proud of this history and proud of honest John McKenna - who is arguably the greatest Irishman who has ever been involved with the game of association football in Britain."

Earlier in the day ex-red and Republic of Ireland international Ray Houghton made a flying visit to the area to view the plaque.

Houghton said: "I'm embarrassed not to have known anything about this man during my time at Liverpool, but it's a great tribute to him and to the local area that this is now being rectified". 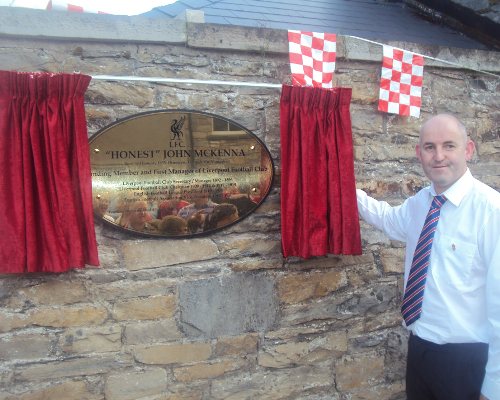 When unveiling the plaque Moen said: "It's a great honour for me personally to unveil this magnificent plaque.

"I have a lot of people to thank. The local community, the County Council, my family, friends and most of all, 'Honest' John McKenna. It gives me great pleasure to unveil this plaque in honour of Liverpool legend and Monaghan native "Honest" John McKenna."