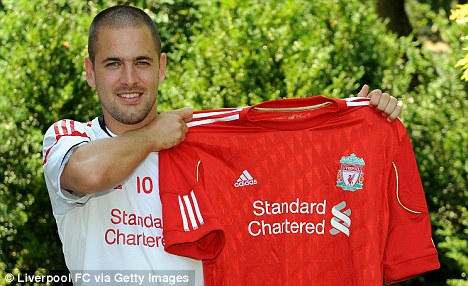 "I thought about the semi-final of the Champions League in 2005 when I ran on to the field and the hairs on the back of my neck stood up. I was thinking about playing in that atmosphere every week and that swung it for me."

Joe Cole, surplus to requirements at Chelsea and a free agent after his contract with the London club had expired around the time of the World Cup in South Africa, became Liverpool’s second big signing in the summer of 2010 and effectively new manager Roy Hodgson’s first signing as the Milan Jovanović deal had been instigated by the previous manager.

An England international with 56 full caps at the time of his move to Anfield, Cole was already well-known by Liverpool supporters as someone who had been a thorn in their side on several occasions, having scored the winning goal for Chelsea against the Reds in both Premier League matches during the 2004-05 season; and also the opening goal in the Champions League semi-final tie between the two clubs two seasons later. In addition, he had been a member of the Chelsea team that beat Liverpool in the 2005 League Cup final in Cardiff.

Born in London, Cole was one of a number of fine, young English players who came through West Ham United’s Youth system in the 1990’s. He was part of the West Ham team that won the F.A. Youth cup in 1999 and had also come to the attention of the men who ran the National set-up by scoring seven times in a Youth match against Spain. By the time he signed his first professional contract with West Ham, he had already been on the wanted list of a number of high-profile clubs who had monitored his progress as a teenager.

At the start of 2003 Hammers manager Glenn Roeder made Cole his captain at the young age of 21. But West Ham were soon relegated from the Premier League and it was pretty much inevitable that the young player, who had just been named "Hammer of the Year" would move on. When Chelsea came calling, it was hard to say no to a club that seemed likely to be competing for the game’s major honours sooner rather than later. Cole settled quickly into life at Stamford Bridge and soon became a first-team regular, playing in 97 of the maximum 114 Premier League matches in his first three seasons with the West London club. The second and third of those seasons brought him his first tangible senior success as Chelsea won and then retained the Premier League title.

Cole made his senior debut for England two years before he left West Ham for Chelsea; and his first England goal came in a friendly victory over Serbia & Montenegro in June, 2003. He made the 2002 World Cup squad but was restricted to a single substitute appearance; he didn’t play at all at Euro 2004 but certainly made a big impression when the World Cup was held in Germany in 2006, scoring a thrilling volley to open the scoring in the group game against Sweden before later creating a goal for Steven Gerrard in the same match.

Injury restricted Cole’s club and international appearances in 2006-07 as he needed surgery on his foot at the start of 2007, but he recovered in time to win an F.A. cup-winners’ medal at the end of the season. By the middle of 2008, he knew he had reached a crucial stage of his career because he would now be playing under new managers (Scolari and Capello) for both club and country. Unfortunately, injury again hit his hopes and he missed the second half of the 2008-09 season after requiring knee surgery. He also missed the next pre-season training and did not appear for Chelsea’s first-team again until September. Even though his appearances were restricted, he scored a crucial goal at Old Trafford late in the season in a victory that ultimately saw the Blues regain the Premier League trophy they had relinquished to Manchester United in 2007.

Joe Cole’s Chelsea contract ran out at the end of June 2010, at which time he was in England’s World Cup squad in South Africa, a tournament in which he added to his growing total of international games with two substitute appearances.

Cole arrives at Anfield with probably more winners’ medals than any player who has previously signed for Liverpool Football Club. Still the right side of thirty, there is no reason to think that he won’t be a crucial part of the squad that new manager Roy Hodgson inherited and adds to. The Londoner arrives on Merseyside determined to add to his 300+ Premier League appearances and 50+ England caps. It’s a certainty that he will be looking to add to his medal total too and that is of course something the Liverpool supporters yearn for as well.