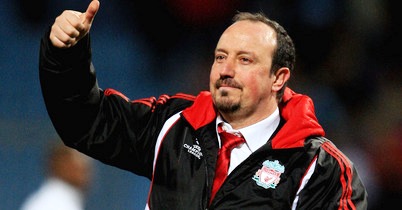 Rafa's departure has been handled in the most appalling way, especially in the last 24 hours before his departure, until the Club finally and almost reluctantly put something on its official website.

Did he really go 'by mutual consent'? I very much doubt it. Nothing Rafa has said in recent times about his situation indicated that he wanted to leave or was willing to do so.

Houllier didn't want to go either in 2004 but if the Board decides your time is up, that's a hard decision to counter.

Since 2007 Benítez has had to manage under the most difficult conditions and pressure imaginable. I'll forgive him the odd team-selections, some bizarre substitutions and many baffling interviews. And I will praise him for his restraint and dignity considering the working conditions he faced. But I honestly do believe this is the right decision for Liverpool Football Club's future.

Who is likely to want the 'poisoned chalice' they will inherit by taking the job? Oh, don't worry, there will be lots of candidates. Had the Club approached Benitez before Houllier left? You're damn right it had! If the Club hasn't already lined someone up, I will be extremely surprised.

Rafa gave a new generation a night they will never forget. He gave them the equivalent of our 'Rome 1977'. Rafa leaves us with a lot of very happy memories. But he also leaves with the sadness, and I expect he feels the same, of not being able to push on from the second place finish of a year ago. Nineteen competitive defeats in the season just finished was not acceptable. That's more defeats than we have won League championships!! Something had to give ... and one proud man's voice was never going to be enough to win the battle against the pressure to succeed in the modern sporting world.

Rafa said through the club: "I'll always keep in my heart the good times I've had here, the strong and loyal support of the fans in the tough times and the love from Liverpool. I have no words to thank you enough for all these years and I am very proud to say that I was your manager."

We will remember your good times too, Sir, while we try to forget the abject dross we had to sit through in much of the last twelve months. Your legacy is your first year not your last. For that we thank you and we salute you.

Good Luck and Good Fortune Mister Benítez and family. If ever a man seemed destined to take over Bill Shankly's mantle, you were that man. It wasn't for the lack of trying. It just wasn't meant to be.