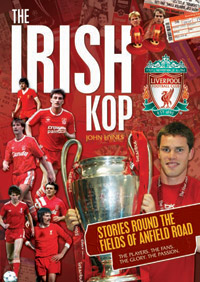 The links between the city of Liverpool and the land across the Irish Sea go back centuries. Ken Rogers even starts his foreword to “The Irish Kop” by stating that “Liverpool is the capital of Ireland”!! It shouldn’t therefore be a surprise that some of Liverpool Football Club’s most loyal and fervent supporters come from that land. Since my first visit to Anfield way back in 1969, I have always heard Irish accents from both North and South in the clamour outside the stadium as fans wait for the turnstiles to open.

I don’t know author John Hynes personally. But when I saw his photograph at the front of his excellent book, I felt that I did. That’s because I know I have seen him many times over the years outside Anfield and other stadia, that his face is easily recognised as a regular match-going Red in the same way as those of Jim Gardiner, Bobby Wilcox and many others. 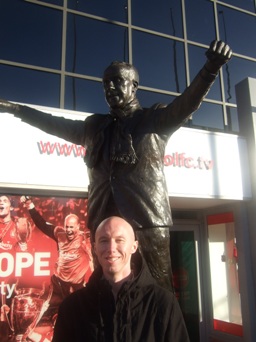 We all have a story to tell as Liverpool supporters. John’s book puts those supporters into four distinct categories … Players, Celebrity Fans, Writers and what he describes as The Irish Kopites or ‘ordinary’ as opposed to ‘celebrity’ fans. However, as you read through these sections, you realise that the word celebrity is irrelevant. Most non-Irish readers will probably not have heard of some of the Celebrity Fans anyway because they do not follow Irish sports; probably the same goes for the Writers with the exception of Brian Reade and Paul Tomkins. It matters not because it is what they are telling us that is important, not what they have achieved in their own lives (and in many cases that is a lot). It’s always fascinating meeting other Reds and learning from them when and why they started to follow Liverpool, what their early memories are of the club, recalling their first trip to Anfield, their best (and in some cases) worst experience. John Hynes brings all those factors and more together as he taps into the memory-banks of dozens of different supporters right across society and from quite different walks of life.

Inevitably much space is rightly devoted to the players, men who were good enough to do what we all probably dreamed of doing. Some supported Liverpool as boys and were lucky enough to live the dream. Some had genuine Irish backgrounds while others’ links were more tenuous. But either from supporting Liverpool or playing for Liverpool … or both … they are able to give us a fascinating insight into their lives. In modern times … let’s say from the start of the 1970’s until the end of the 1990’s … the club never seemed to be short of good, Irish players. Before the 1970’s and since the Millennium it has been a different story because throughout Time the game has changed and so have the attitudes to it of the people who play and watch it. Of those who played it, few had such an impact as the legendary goalkeeper and Ulsterman Elisha Scott and a wonderful Liverpool career that lasted over two decades is superbly summed up in this book by journalist Gerry McGuinness. Had it not been for the First World War, which interrupted his career and that of so many of his colleagues, Scott’s impact on the world of football would have been even stronger. 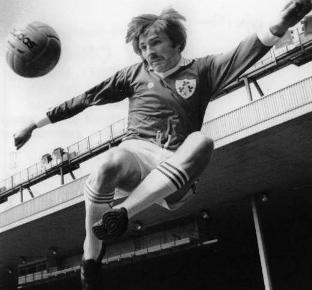 In more recent times, it was fascinating to read the views of so many players that I, like John Hynes, watched on a regular basis from the 1970’s onwards. From a historical point of view, most readers will already know what the likes of Steve Heighway, Ronnie Whelan, John Aldridge, etc. did for Liverpool Football Club when it came to protecting and enhancing the successful run started by Bill Shankly and continued by his successors. What we might not have known until now is what led up to them joining the club and what in some cases led up to them leaving it. We know how much playing for Liverpool meant to the likes of Aldridge, Keane and McAteer because the club had always had a special place in their hearts from childhood. But other men who proudly wore the green of Ireland also just as proudly or even more so wore the red of Liverpool. I was not aware that Michael Robinson had grown up as a boyhood Red, even though his path to Anfield was a long and complicated one. Looking back on his playing career years after it ended, Robinson emotionally says “My life is happy because I got to defend the colours I’d loved since I was a kid and still do now”. Michael was fortunate enough to play with some of the best players British football has ever seen. If his time at Anfield was brief (barely 15 months from the day he signed until the day he left), it was still successful. He will always be revered as a member of the historic 1984 Treble-winning squad. Michael says with great humility but with real feeling “I got far more than the Treble. Pulling on that shirt was the greatest trophy. It was the ultimate honour”. Twenty years before the days of the insincere badge-kissers, Michael Robinson won’t be the first name on everyone’s lips when asked to name Liverpool men who also represented the Republic of Ireland. But he has certainly been one of the proudest to achieve that honour.

John starts his Players’ section with a fascinating question-and-answer session at a Liverpool hotel with John Aldridge and Ronnie Whelan. Both men were of course part of the Irish squads that famously beat England at the 1988 European Championships in Germany and Italy at the 1994 World Cup in America. Proud as he was to finally put on a Liverpool shirt in 1987, Aldridge candidly says that “To be part of the first Ireland team to qualify for a major tournament was the stuff dreams are made of” and Whelan adds “The result against England put us on the map. It announced to people that we’d arrived as a football team”.

Before Aldridge and Whelan’s arrivals in the 1980’s, Dublin-born Steve Heighway had made an explosive impact at the start of the 1970’s and actually made his full international debut (in September 1970) less than a month after making his First Division debut for Liverpool. Heighway’s university background meant that he was far from a typical footballer and he confesses that it was “a bit of a shock when Liverpool knocked on the door”. The Shankly psychology probably prevented Steve from representing Ireland more than 34 times. Says Steve “There were times when the boss would withdraw me from squads without telling me. I’d only find out after the game had taken place. It was easy for him to do that because I was the only Irish player at the club, so if he didn’t tell me about it, nobody else would. Back then Ireland didn’t receive much coverage, it was all about the England and Scotland fixtures”.

It’s fair to say that Phil Babb and Mark Kennedy probably had less successful international careers than Steve Heighway but both still talk warmly about their time as Liverpool men who also played for the Republic, as do Jim Beglin and Steve Staunton with the latter admitting with some sadness “Anfield is obviously famous for its European nights … I would love to have sampled that once”. “Stan” also has regrets about his brief time as Ireland’s manager, believing he could have been given more time when he says “I thought we received an awful lot of unfair criticism. I was helping out my country in a time of need but I didn’t get much reward for that”.

There’s an interesting chapter on Cork youngster Shane O’Connor’s progress at Liverpool’s Kirkby Academy that gives a useful insight into the obstacles facing a young man trying to fulfill his dreams of becoming a professional footballer. The most recent Irishman to be given a chance of achieving that dream is of course Robbie Keane, even if ultimately it was a dream that turned sour. Another self-confessed boyhood Red, Robbie explains why he turned Liverpool down in favour of Wolverhampton Wanderers when in his mid-teens, “I had a good feeling about Wolves. Being a Liverpool fan and having met all my heroes there, it was a difficult decision. I remember my mother saying ‘don’t sign for a team just because you support them. Make sure you go to the club that’s right for you’.” Years later Liverpool was right for Robbie Keane but unfortunately it didn’t work out the way he, the club or the supporters wanted it to. “Even though I was pretty settled at Spurs, I still believed I’d play for Liverpool one day. I’d never given up hope on that”. 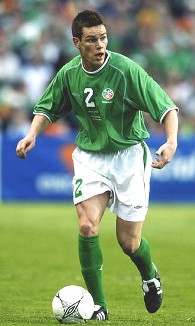 John Hynes continues to break up stories from players and fans by having a “Liverpool on tour” section with reproductions of tickets and programmes from many matches Liverpool have played on Irish soil over the years. Later, in a section called “We are the Irish, the Irish Kopites” numerous supporters talk honestly and emotively about how LFC came into their lives, what it means to them and what they have experienced so far. It isn’t a surprise that the Miracle of Istanbul features heavily on those pages. On that dramatic evening, the book’s author himself was in a bar on the island of Zanzibar and RTE reporter Eamon Horan actually watched the match in Milan (!) and was therefore able to witness the ecstatic celebrations of the Inter supporters after the shoot-out had sealed Liverpool’s unlikely triumph.

Wexford-born singer Chris de Burgh solved the logistical nightmare of trying to get to Turkey that week by using his private jet to take him and his immediate family to Istanbul and, because hotel rooms were fully-booked, staying in a boat on the banks of the Bosphorus. De Burgh has become quite friendly with Didi Hamann and the two have often reminisced about that amazing night. But there was of course one Irishman (Steve Finnan) in the team that lifted Liverpool’s fifth European crown in such dramatic circumstances. 29 years old at the time of the final, the unassuming young man from Limerick makes no pretence of being a childhood Liverpool fan but he qualifies that by saying that while he was growing up “I was always an admirer of Liverpool and their approach. I wasn’t a supporter but I was definitely able to appreciate just how good that team was”. Steve’s Liverpool career, like all the other Irish players covered in “The Irish Kop”, is now over. Maybe a youngster like Shane O’Connor will break through into the first team. But whether he does or not, one thing is for sure. History indicates that many young Irish footballers will continue to have a dream of playing for Liverpool so it’s pretty much inevitable that one day that dream will come true for someone who might go on to emulate the success of a Mark Lawrenson or a Ray Houghton. But whether there is an Irishman in Liverpool’s team or not, it is guaranteed (and this is a feeling confirmed time and time again by reading through John Hynes’s book) that “The Irish Kopites” will continue to find ways and means of crossing the sea that divides the British mainland from The Emerald Isle and making the pilgrimage to Anfield that so many thousands have made before them.