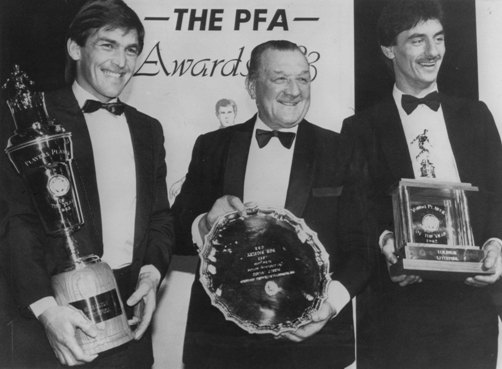 Of all the players I have played alongside, managed and coached in more than forty years at Anfield, he is the most talented. When Kenny shines, the whole team is illuminated. Kenny is worth watching all the time. He has an intiution that enables him to take decisions on behalf of other players. If they are alive to his scheming, if they can tune in to his wavelength, he can bring them in bang and cue. I’ve seen him pull players into the game without them even realising it. It’s almost hypnotic. He plays passes which demand that his colleagues go where he sends them. He points and they start playing. Kenny has the skill and the vision to manipulate a game, but he is aware that he must use that grip to benefit the team and not just himself. Therein lies his true greatness.

Kenny is not only the best individual I have come across, he is the best team member too. This fellow is the professional. How many days was I his manager? .. must be well over two thousand. And not a single day’s trouble amongst them. If he seems to be toying with opponents at times, it is only because he is thinking and acting so much faster than anybody else. Like a good snooker player he is always planning ahead, getting into good positions. He can control a pass almost without looking, and buy himself an extra split second to weigh everything up and stay ahead of the game. It is most apparent in his finishing.

The goal that won the European Cup Final at Wembley in 1978 may not be the most spectacular he has ever scored. Where’s the magic in that, you might ask? The magic only really became apparent to the onlooker when the film is slowed down and we are given the chance to thing at the same speed as Kenny. Then you notice how he took up a position on the blind side of defenders from where he could keep an eye on the offside trap too. You notice how quickly he reacts to Graeme’s pass. Then you see him forcing an acrobatic goalkeeper to make his move before Kenny reveals his hand and goes for the chip. But the best of all, you see him celebrate the goal as if it was the first he had ever scored. The arch professional suddenly loses out to the football nut. The arms fly high and wide, the smile cracks the face in half, the eyes sparkle and he’s sprinting away faster than he’s moved all night. When he scores a goal, one of the bigger hearts in football comes shooting to the surface to enjoy the moment with his million of admirers.