Liverpool and Everton clash in an FA Cup semi-final 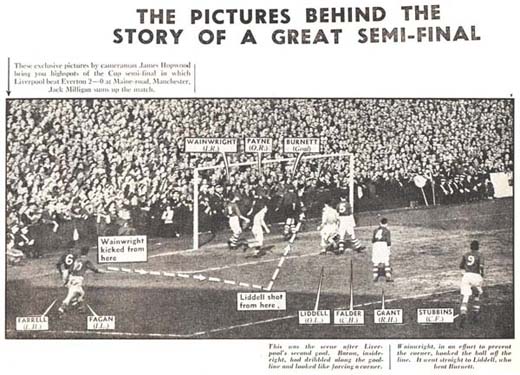 The tension was more than palpable when Merseyside neighbours Liverpool and Everton were drawn against each other in the FA Cup semi-finals in 1950. They had met previously in the semi-finals all the way back in the 1905/06 season when the Blues won 2-0.

A journalist had figured out how Everton could defeat Liverpool:

"Stop Billy Liddell! Those will be Everton manager Cliff Britton's final words to his players when they leave their dressing-room to tackle Liverpool in the Second Cup semi-final at Maine Road, Manchester on Saturday.

Stop Billy Liddell and the Liverpool forward line loses its rhythm. This has been proved twice in the past week - when Aston Villa right back Harry Parkes clung to him like a leech and when Manchester United's Johnny Carey played him out of the mid-week game.

Each time the Liverpool attack was reduced to a limp. All the clever ball play of centre-forward Albert Stubbins, the lightning right-wing dashes of young Jimmy Payne and the efforts of inside men Fagan and Baron seemed to go nowhere when without the Lion of Liddell.

He is the man with a kick like a horse and a goaldash like a rocket. Given half a chance and the narrowest gap he can cut through at breakneck speed and find the net before the defence has time to close in."

It was easier said than done to stop Liddell and needless to say he was too hot to handle for Everton's defenders. Billy and Bob Paisley scored for Liverpool in this fantastic match which one journalist described as the finest ever between the teams:

"Pardon me while I search for more superlatives. Not to mark Liverpool's first entry into the FA Cup Final since 1914; nor to mark the twenty minutes of Everton's combined operations, but to shower on both teams for the magnificent spirit in which they fought. Because it is so much more difficult to lose than win with grace, Everton beaten surely as they were, will never lose with greater credit. If there had been a gentleman's agreement to decide the issue purely on football, it could not have been kept more strictly." 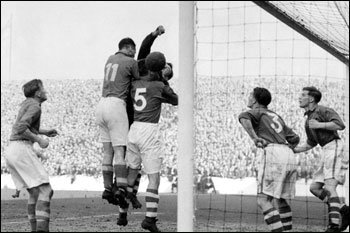 Paisley was having his "best game for seasons" and his shot broke the stalemate.

"At the 30th minute Liverpool supporters went wild with jubilation when the Reds took the lead. The movement was started by an upward pass by Taylor to Baron, just inside the Everton half. Baron slipped it back to Taylor, Taylor on to Payne, who beat Hedley, cut in and centred with his left-foot for Barnett to punch away to Paisley. The half-back lobbed the ball goalwards high in the air, where Liddell, boring in at top speed, jumped for it at the same time as Burnett and two Everton defenders. It looked as though Liddell might have connected, but actually he did not, and it was Paisley's lob which entered the net direct, and the half back must go down as the scorer." (Liverpool Echo)

Liddell made sure Liverpool were going to Wembley in the 62nd minute: "Baron had dribbled along the goal-line and looked like forcing a corner. Wainwright, in an effort to prevent the corner, hooked the ball off the line. It went straight to Liddell, who beat Burnett." 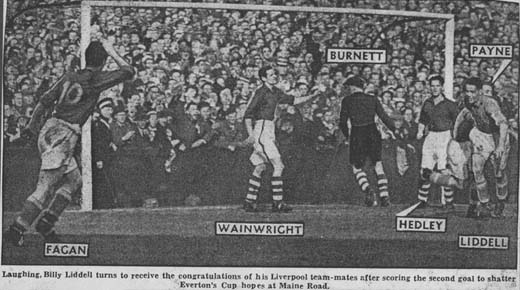 Liddell continued to threaten Everton's goal: "With 15 minutes to go, Liddell again forced a corner, the twelfth which Liverpool had gained so far, to Everton's three, nine of which had come from Liddell's flank. With his twelfth one, Liddell tried an inswinger which curved appreciably and struck the near post." 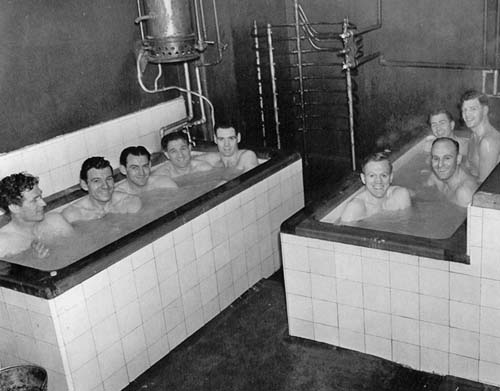 Arsenal won Chelsea 1-0 in a semi-final replay and then beat Liverpool at Wembley 2-0. Bob Paisley admitted later to have come close to leaving Liverpool as he was not in Liverpool line-up in the final, despite playing so brilliantly vs. Everton.

However the semi-final was a Merseyside derby with added significance that will forever be remembered:

"When the players walked off at the end shaking hands to the accompaniment of a sound which can only be likened to the noise of 10,000 tons of granite chippings dropping on 10,000 Nissen huts (cumulative effect of 10,000 whirling rattles), it was almost a poignant moment for anyone with even the remotest interest in either club."