Liverpool were three down and scored four in 2nd half! 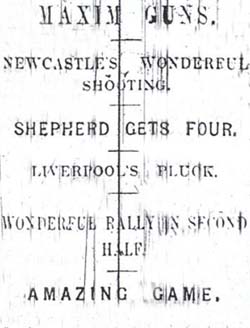 Liverpool's battle vs Newcastle on 4th of December 1909 portrayed the team's fighting capabilities. Certainly one of the greatest comebacks in Liverpool's history!

Right back Left back
Chorlton Rogers

Liverpool conceded in the first minute of play, but the Anfielders replied in dramatic fashion: "This looked like a catastrophe for Liverpool, but an even greater sensation was in store. The Reds slipped straight away from the restart and the three inside men eluded all opposition. It was all over in a trice, for although Stewart came in collision with Lawrence, he made no mistake in engineering the ball past him. Thus in two minutes two goals had been scored." 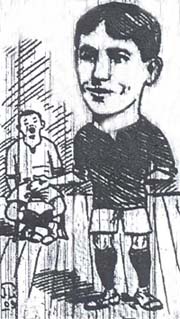 Half-back Harrop was doing a star turn in Liverpool's defence: "a thorn in Newcastle's attack. He was here, there and everywhere" and his "wondrous skill perplexed and outwitted the visitors continually." However, Newcastle had targeted Tom Rogers, Liverpool's left-back, as a weak link: "Rutherford treated Rogers very unceremoniously and the weakness of this young back was never more apparent than when Newcastle scored their second goal. The doughty right-winger sprinted confidently down his wing. Rogers advanced to meet him but was easily worsted... The coup de grace was finally administered by Shepherd."

1-2 for Newcastle and Shepherd continued his crusade against Liverpool: "The visitors continued to raid Liverpool's territory with a series of delightfully executed efforts. In one of these the quintette was engaged in full line, the ball being worked by Shepherd. The Newcastle centre finished the movement with a rapid forward sprint of five yards, when he fired at Hardy straight and swift as an arrow. The home custodian proved unequal to such dazzling tactics. With two goals in arrears it looked all over for Liverpool, but not so, for they proved full of fight, and at last a strong forward movement in which the inside trio was mainly concerned, culminated in Stewart passing into Parkinson, the Liverpool centre reducing the arrears by a goal. Five goals was full value for money to the 22,000 spectators."

Howie who scored Newcastle's first goal, struck the underside of the bar and Newcastle's forwards continued to go past Liverpool's Achilles' heel, Tom Rogers, towards the centre of goal: "After the first half-hour the Geordies' front line had come to a perfect understanding. Shepherd was in wonderful shooting form, being dead on bull's eyes every time, and putting astonishing power behind his shots. Twice again he beat the lynx-eyed Hardy with clean, straight drives. His fourth success secured the position of champion scorer with a total of sixteen to his credit for the season. 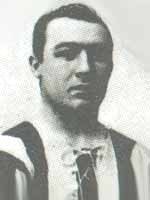 Albert Shepherd (on the image above) is a Newcastle legend and scored 94 goals in 132 games. Newcastle was leading 5-2 at half-time and Shepherd had scored four goals, making him leading scorer in the league.

On to the historic second half...

"When the contest resumed the Livers had an impossible and disheartening task before them, but they started off in cheery fashion, and Parkinson was not long in bringing Lawrence to his knees with a long shot. Rutherford tried to beat Rogers, Bradley and Chorlton in turn, but was held up by the latter at the finish. There was a tough struggle between Liverpool's inside trio and Low and Parkinson darted out with the ball at his toe. He was stubbornly opposed at the finish of his run, but steadying himself admirably, he got some curl on his shot and placed the ball well out of Lawrence's reach. The heavy crop of goals, eight in all, was somewhat perplexing, but it simplified matters to remember that four belonged to Shepherd.

Rogers, pursued by Rutherford, escaped by shooting over his own goal. At the other end there was a brilliant move between Goddard, Stewart and Orr, but McCracken was just in time to charge down all shots. Robinson grassed McWilliams with a lovely shoulder charge. Then came a pretty concerted move in which Stewart, Parkinson and McDonald figured, but the winger tarried too long at the finish. Parkinson and Stewart by sheer pertinacity broke through. It looked a goal all over when Stewart at three yards range crashed the ball against the upright instead of into the netting. The Livers were having vile luck.

The revival of the Reds was really astonishing and so determined were they that it seemed quite on for them to avert defeat. Especially was this so when Orr scored another goal from twenty yards' range. Lawrence partially cheated and tried to scoop the ball out. It was an astonishing game so brimful of interest and sensation to be absolutely perplexing. McDonald and Orr's should have resulted in Stewart equalising, but he fell in the goalmouth instead of shooting past Lawrence. The seemingly impossible happened when McDonald, Parkinson and Orr, with almost superhuman energy, swept all before them, Orr equalising under very great difficulty. The excitement of the crowd was intense and the noise almost deafening at times. Would you believe it. Robinson's forward pass, crossed to Goddard, and lo and behold, the Reds were ahead."

A truly astonishing game... Liverpool were losing 5-2 at half-time but won 6-5! A classic comeback and truly one of Liverpool's best.