Tom Watson - A most beloved man 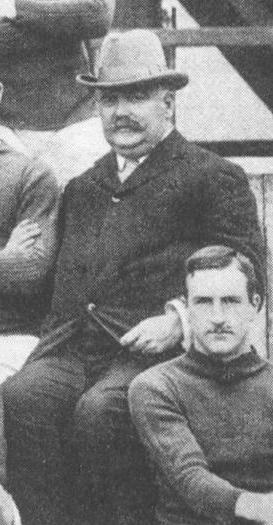 "One of the secrets of his success in discovering new players was his own personal popularity. Everyone he met liked him and was always ready to do him a service. So, when Tom wanted to know when a certain player was to be seen playing, or when he wanted another player's record, or playing experience, Tom has so many lists of friends all over the country and in Scotland that he had merely to write to anyone of a dozen whose opinion he sought, to get all the information he wanted. He touched the wire and back came the information." - Tom Watson remembered by Liverpool Echo's Victor Hall in 1924.

Tom Watson deserves his place among the greatest managers in Liverpool FC's history and if one reads his contemporaries' account of the big man he was clearly one of the most beloved figures who have ever graced the football club. Watson was in charge of Liverpool for 19 years, being the longest serving manager in the history of the club. Liverpool had been in existence for four years, just being promoted from the 2nd division for a second time, when Watson took over at the club in 1896, only 37 years of age. Watson was the most successful manager of his time, in charge of champions Sunderland 3 times in 4 seasons in 1892, 1893 and 1895.

Watson weaved his magic at Sunderland which only had been elected to the Football League in 1890. His Sunderland team was reflected upon by Liverpool Echo's Victor Hall in 1924:

"If there was one man who had the surpreme gift of creating esprit de corps on a football team of eleven men, then that man, was the same Tom who beat, and hammered, and forged to perfection the steel-tempered football machine that was in his day the "irresistible" Sunderland team."

"They were nothing particular to look at either, that wonderful Sunderland team of "all the talents". As men, they were not by any means a big team, just middleweights, the forwards rather on the light side, the halves middling, the backs sturdy, the goal, Eddie Doig! But they knit well, the played perfect combination, they shot hard and often, and they were never "beat". When they got a goal or two, they didn't ease off, they went at it twice as hard. They were trained well, not molly-coddled, they were not overpaid, and they had Tom Watson as guide, philosopher and friend."

"Once at a half-time interval I saw the trainer take a new bottle, unopened, of whisky to the dressing room. It was a piercingly cold day with a bitter east wind blowing half a gale across the ground. Evidently, thought I, the secret of Sunderland's success is "Scotch". It was, but not in the sense I thought. A moment afterwards I saw the trainer pouring the whisky into the hollow of his palm and rubbing it into the chests and backs of each of the eleven players of his team. They skipped about like kittens that second half while some of the opponents were looking blue with the cold." 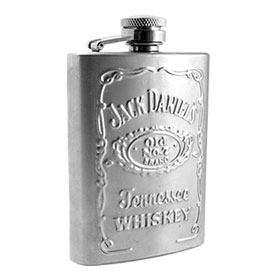 Tom Watson's secret to his success?

"System" you would say? Yes! "System and Tom Watson" for he was the brains of the team in those days, though this public only saw the sturdy figure of linesman, well muffled up with a ruby complexion and inevitable cigar just visible below the brim of his cap. For in the day of club linesmen Tom had always acted, and was as good as an extra forward when advice was wanted in attack or defence."

"Can you wonder, then, with that record, how the news went round like wildfire that Tom Watson was going to "skipper" Liverpool? Can you realise the sigh of relief to those who had borne the heat and struggle of the early years when, at last, they could lean back and leave the destinies of the club in the strong hands of he who had "made" Sunderland?" 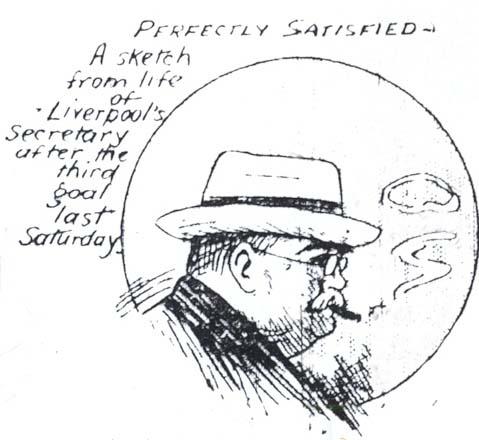 Sketch of Tom Watson from 14th September 1912
"This public only saw the sturdy figure of linesman, well muffled up with a ruby complexion
and inevitable cigar just visible below the brim of his cap."

Watson must have seen some promise in this Liverpool team and been tempted by a nice sum of money as just one year ago Sunderland had won their third title under his rule while Liverpool had been relegated to 2nd division.

Scotch was used by Watson to keep the Liverpool players warm and he encouraged his players to drink beer and red wine. He implemented a strict diet and new coaching regime. Breakfast at 8.30 ideally consisting of weak tea, chops, eggs, dry toast or stale bread. A glass of beer or claret was recommended at dinner, but butter, sugar, milk, potatoes, and tobacco was to be "sparingly used". Liverpool exercised two times a day, 9.45 am. and 3.30 pm. along with half an hour stroll at 7.30 am. and one hour stroll at 7.30 pm. when "out walking the whole of the players must keep together and accompany the trainer."

There was a noticeable improvement in Liverpool's play in Watson's first season. Liverpool had been relegated in their only season in the top flight, but now finished in fifth place in 1st division just as Sunderland had done in the previous season. Ninth place the following season was somewhat of a disappointment, but Watson took Liverpool to the brink of the championship in the 1898-1899 season, only losing the title to Aston Villa on the final day of the season. Liverpool finally managed to win the championship in 1901 and again in 1906. Tom Watson had written his name firmly in Liverpool's history books.

As well as being successful at Liverpool Tom Watson was immensely popular throughout the game and seemed to be quite a character. Victor Hall writes in the Echo:

"Many years ago I met in Glasgow a journalist who wanted to know if I had ever met Tom Watson, the Sunderland Club secretary. I told him I had seen Mr. Watson frequently acting as linesman for the Sunderland Club when they played Everton. 'Well', said he, 'if you ever get him in the humour in Liverpool, get him to sing 'Bricks and Mortar. You will never have better fun as long as you live. He sang it here for us at our dinner of the S.F.A. last night and man I am laughing yet.'

"Well, a few years after that conversation the unexpected happened, and in the process of time Tom had become the Secretary of the Liverpool Football Club and speedily became the most popular club secretary within twenty miles of Liverpool. I heard 'Bricks and Mortar' in due course and like any Glasgow friend, enjoyed the hilarious rendering of the rollicking song, as have no doubt hundreds, if not thousands, of people still living, for there was not a more welcome guest in Liverpool at any function relating to sport than dear "Old Tom".

"Whether it was football, bowling, billiards, cycling, cricket or baseball, his name was the first to be written when invitations were being drawn up, and when called upon for a song, which was always, he was faithful to his old favourite and 'Bricks and Mortar' soon had a joyous chorus, for the words were simple, the melody easy, and the sentiment, irreprochable! 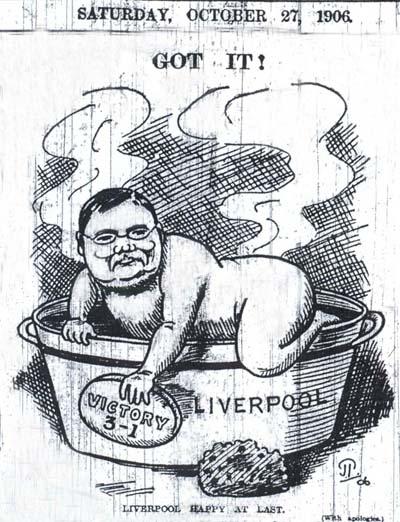 "Liverpool happy at last!" Liverpool finally won a game after five 1-2 defeats in the row for the champions. The sketch artist adds "With apologies" in the bottom right hand corner. Whether he is apologizing beforehand to Tom himself or for possibly offending certain readers of the Echo is not certain. However, it would be strange to see a sketch of Rafa Benítez in the bath celebrating a long-awaited victory!

"Dear Old Tom"! Who can ever forget that cheery, chubby face, the series of dimpling ovals radiating goodwill and happiness to all and sundry? Who can forget the strange pawky accent, so reminiscent of his favourite Tyneside, that grating at first on our Lancashire ears, by and by sounded so natural, and became with familiarity warm and happy in its intimitacy?" - Victor Hall.

On 6th of May 1915 Tom Watson passed away only 56 years of age after nineteen years at the helm at Liverpool, which means he is the longest serving manager in the history of Liverpool. The following day after his death he was remembered by Echo's Bee:

"Poor old Tom! There was no hope from the start. He could not resist pneumonia and pleurisy. His constitution was not too strong and the end robs of one of the features of the game. He was to football what Bunny was to "the movies" and he had a heart of gold. All round the country one hears expressions of deepest sorrow at the sudden death of our friend, and the funeral on Monday at Anfield, will show in some measure in what respect Tom was held. Bluff, hearty, jovial, fond of a joke and was always prepared to listen to one. Tom was a favourite all over the country." 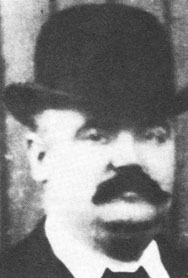 LFChistory.net hopes that this article will further cement Tom Watson's name in the minds of Liverpool supporters. He was a vital part of the club's history, a legendary man and manager. Victor Hall has the last word on the legacy of Tom Watson:

"And how worthily Tom bore out the confidence then placed in him at the time and the proud records of the Liverpool Club have since shown. He fulfilled every promise his earlier promise held out. He brought fame and fortune to his players and to his club, and enjoyed here, as he often admitted to the writer, some of the warmest and most cherished friendships of his whole life."

"In Tyneside he had been an extraordinary popular favourite, in Liverpool, if it were possible to say so, that Northern record was more than surpassed. He surrounded himself with warm, ardent friendships that were with him to the day of his death here, and that have endured after him, and will endure and annoble the game of football while the Liverpool Club exists and after that!"

Copyright - Arnie at LFChistory.net ([email protected]) - based on an article by Victor Hall in the Liverpool Echo in 1924