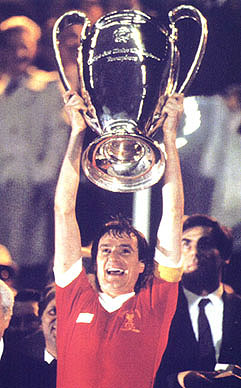 Rarely does the manager change his captain after the season starts. When Gerrard replaced Hyypia on the 15th of October it was by no means a unique occurance at Anfield. Lets go back in time.

Phil Thompson was the captain of Liverpool at the start of the 1981/82 season. Phil had taken over the captaincy back in April 1979 from Emlyn Hughes. Phil led Liverpool, for the first time as captain, on the 7th of April to a 3-0 victory against Arsenal at Anfield. For a local lad, it was a very proud moment to captain his boyhood heroes. 'I could hardly believe it when the boss told me. It´s been the greatest ambition of my life to captain Liverpool and now it´s come true.' Phil lifted the Championship trophy in May and in the next season as well. In season 1980/81 Phil led Liverpool to two trophies. On April 1st he became the first Liverpool captain to get his hands on the League Cup after Liverpool´s replayed 2-1 victory against West Ham United at Villa Park. In May, he was holding a bigger trophy in Paris after Liverpool´s 1-0 win against Real Madrid in the European cup final.

Half a year later, in December 1981, things were not well at Anfield. On Boxing Day Liverpool lost 3-1 at home to Manchester City. Phil and his fellow defenders, not to mention Bruce Grobbelaar, had not had a good Christmas. Liverpool were in 12th place after this defeat way behind the leaders. In the following days Bob Paisley thought long and hard about what to do. He came up with a surprising decision. Bob thought it would be best for Phil, and perhaps more importantly the team, to take the captaincy off him. Graeme Souness was named as a new captain. Phil was of course devastated. A dream had come to an sudden end. But Bob told Phil the burden of being captain was, in his opinion, having a bad effect on his form. Phil did not agree but accepted the decision. Graeme understood how Phil felt and later said: 'Lesser men would have taken the decision more personally.'

On the 2nd of January 1982 Graeme Souness led Liverpool out, as a captain, onto the Vetch Field for a 3rd round FA cup game. Liverpool played their best game for weeks and won 4-0. Nobody at Liverpool looked back. Liverpool won the League Cup in March after beating Tottenham Hotspur 3-1 at Wembley. Graeme got his hands on two trophies that day. The League Cup and the Milk Cup which was also presented. In May Graeme received the Championship trophy. Phil Thompson played very well to the end of the season and had a great World cup for England in Spain in the summer. Who could say Bob Paisley wasn´t right?

But how did Bob explain his decision? In his "Team talk" in the programme Anfield Review, on the 12th of January 1982, he spoke out about the matter.

"It may have come as something of a surprise when I decided to take the captaincy off Phil Thompson for the F.A. cup tie at Swansea. It was a difficult decision to take because Phil has been a first-class captain for the club. My reason for the decision was that I felt Phil had been going through a rough patch playing-wise and I thought the extra responsibility of leading the team was having an effect."

"Phil told me he didn´t believe his job as a captain had bothered him but I believe it has. Phil accepted the decision like the true professional he is saying, ‘If it´s for the best for me and of the, that is all that matters.’ I´m firmly convinced in the long term that Phil will benefit from the decision. Equally I´m convinced that Graeme Souness will respond to the added responsibilities. He has the make-up to develop into a top-rate skipper."

Surely nobody can judge that better than Phil Thompson, who has now had his say on matter:

"When you're a proud person, which I know Sami is, it can be very difficult to take. But he was very professional in the manner he accepted it. I completely relate to the circumstances and told Sami what happened to me.

"When I lost the captaincy we were 12th in the league and 18 points behind the leaders. We went on from there and won the title. My performance level went from five out of ten back to nearer ten. Losing the captaincy did make me respond and I'm sure it will be the same for Sami."

"At the time I was upset. I certainly didn't thank him for it. You can imagine what the room was like when he told me. But as you get older you realise why and how it was done and the effect it had. The biggest factor in all of this was helping Sami. We wanted to ease the burden on him. Don't get me wrong. There's not been any doom and gloom around Sami by any means."

"But I've spoken to him many, many times, as I do all our defenders, and I realised he needed to concentrate solely on trying to keep his game together. His biggest quality since he joined us has been his ability to maintain a high level of consistency."

"For a while we think he's needed to get that back. The boss and I chatted about it and although we know a lot of people talk about timing, we felt that for Sami to concentrate 100 per cent on his job this was the right decision."

A final thought. Gerard Houllier’s decision will most likely have the same effect on Steven Gerrard’s career. He is a key player in his team and giving him this extra responsibility will without a doubt inspire him to greater heights as a player and a person. Sami is the ultimate professional and will take this in his stride.