"Hardy, I consider the finest goalkeeper I played against. By uncanny anticipation and wonderful positional sense he seemed to act like a magnet to the ball. I never saw him dive full length to make a save. He advanced a yard or two and so narrowed the shooting angle that forwards usually sent the ball straight at him."
Legendary player and later co-founder of the Football Writers' Association, Charlie Buchan, had plenty of praise for Hardy's abilities.

Born a miner's son in a house on Highfield Lane, Sam first came to Chesterfield's attention as a member of the Newbold White Star side that beat their reserves in the 1902 Byron Cup final. Legend has it that, when manager Jack Hoskin was tipped off about Derby's reported interest in him, he rushed to sign Hardy, finally getting the man's signature under a lamp post in Newbold, but not until Hardy had forced Hoskin to increase his offer of five shillings (25p) a week to eighteen shillings (90p). His on-field performances reflected his character off it, for he was an even-tempered, down to earth man. Considering his great talents it was only a matter of time before he moved to a bigger club.

Liverpool put six past Sam Hardy while in goal for Chesterfield in January 1905, but remembered that, but for Hardy, it would have been closer to twenty on the day. Accordingly, four months later the Reds came in with an offer of 300 pounds plus a friendly, and the 21-year-old Sam was on his way to greatness after keeping 30 clean sheets in 71 league appearances for Chesterfield. The friendly never took place, and Liverpool topped the fee up with another 40 pounds.

Hardy replaced Ned Doig, who had been the club's No. 1 for the opening 8 fixtures of the 1905-1906 season. Liverpool had been struggling for consistency until that point, but Hardy's debut saw Liverpool beat Forest 4-1 and the Reds went on a terrific run, beating Middlesbrough 5-1, conquering champions Newcastle at St James' Park 3-2 and 1st place Aston Villa were buried 3-0 at Anfield, Hardy saving a penalty from William Garratty. After winning 9 out of 10 games, Liverpool were top of the table at Christmas, one point ahead of Aston Villa and with a game in hand. Hardy and his strong defence keeping four clean sheets. Liverpool didn't falter and finished four points ahead of Preston. Liverpool had won the League championship for the first time in Hardy's first season.

A 10-year-old by the name of Walter Dutton was so impressed by Hardy's performance in goal that he put together a little poem for publication in the Liverpool Football Echo in April 1906.

Walter was not the only youth in Liverpool whose imagination Hardy had captured as T. Ellis' story records in the same issue as the poem above:

"While walking through one of our parks the other day I met a youngster about the age of three walking along by his father's side. 'Eh, daddy,' said he, 'there's Hardy.' 'Where and what Hardy?' asked the parent. 'There he is, daddy - him as keeps goal for the Reds.' The father looked and I looked in the direction indicated by the youngster's pointed finger, and there stood, between two piles of coats and caps, a ragged barefoot lad, about ten, engaged might and main in resisting the earnest attempts of other lads to force a penny soft indiarubber ball between the said piles of coats and caps. This is true." 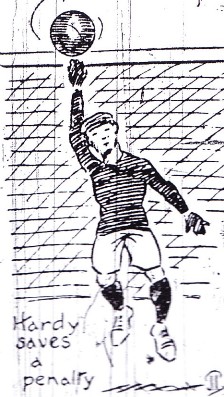 Hardy saved a couple of penalties in his first season for Liverpool, but further cemented his reputation as a conqueror of penalty takers in September, November and December of 1906 by saving three penalties from Everton, Newcastle and Sheffield United.

- He was a smoker. Here's a description of Hardy after a game: "Silent Sam, enjoying his cigarette whilst having his after-the-match bath at Anfield, is a picture of contentment." When Hardy was missing from Liverpool's starting line-up vs Blackburn on 10th September 1910, he was in the stands smoking away... 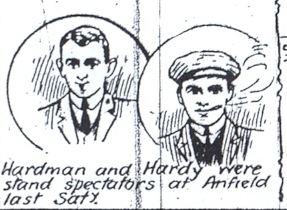 - Hardy was a pig-breeder on a very large scale in Chesterfield, clearly keeping himself busy outside of football.

- Was originally a centre forward. 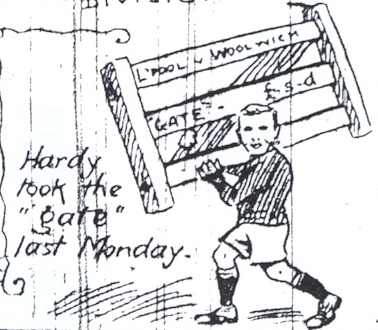 On 17th of April 1911 Hardy got his much deserved benefit game when Liverpool faced Woolwich Arsenal at Anfield. The club and the Anfield crowd showed Hardy their appreciation: "Twenty thousand throats cheering the silent custodian to the echo. The band departed decorously, and the rival captains took the centre, Hardy proving fortunate with the coin, at which the generous crowd cheered again."

Sam Hardy was firmly first choice at Anfield for 7 years until the 29-year-old was replaced by 20-year-old Scotsman Ken Campbell at the end of the 1911-1912 season. Manager Tom Watson was clearly not afraid of putting his faith in his keepers while they were young. The Echo agreed with the management: "The change has been beneficial for the club, for whereas Hardy was beginning to show signs of inability to get to a shot with that electric speed that made him famous." Even though Hardy left Liverpool he continued to have an illustrious career.

Incidentally Hardy's last game for Liverpool was on 6th of April 1912 vs. Aston Villa. Campbell's success and Hardy's denial to move into the city of Liverpool signalled the end of his Reds' career. A month later he joined The Villains who paid 1500 pounds to Liverpool. Following his move Liverpool's board said they "were going to insist in future that their players should reside in the district." As in his debut season at Liverpool, Hardy was victorious in his first season with Villa. Villa won Sunderland 1-0 in the 1913 FA Cup final. Villa finished four points behind Sunderland in 2nd place, but Liverpool with Ken Campbell in goal finished a disappointing 12th.

The following season Hardy suffered FA Cup heartache at the hands of his former team. Villa played Liverpool in the 1914 FA Cup semi-final and Jimmy Nicholl scored two goals past Hardy. Liverpool had finally reached the FA Cup final, but lost 1-0 to Burnley. Hardy won a second FA Cup winners' medal in 1920, when Villa beat Huddersfield 1-0, but a year later he was on the move again after 183 games for Villa. 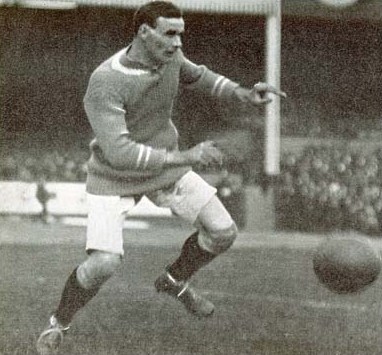 In 1921 he took over the pub Gardener's Arms on Glumangate in Chesterfield. His return to town fuelled fierce speculation that Chesterfield were going to sign him for their impending return to the Football League, but Villa, who had upset the player by insisting that he travel every day to Birmingham to train, were not taken in by Chesterfield's suggestion that a free transfer might be a fitting reward for his services.

Villa got 1000 pounds out of Nottingham Forest for him as the season started which was a gamble considering Sam was a few days short of his 38th birthday. Of course, Hardy became a key member of Forest's team, helping them to promotion to Division One in his first season. He paid scrupulous attention to his fitness which allowed him to keep playing in the First Division until just before his forty-second birthday, in an era when most players were clapped out at thirty.

He played 109 games for Forest before retiring in May 1925. Hardy played 551 league games in 22 years and would have played many more if WWI had not intervened where he served in the Navy. He won one championship medal and two FA cup winners' medals in his brilliant career. 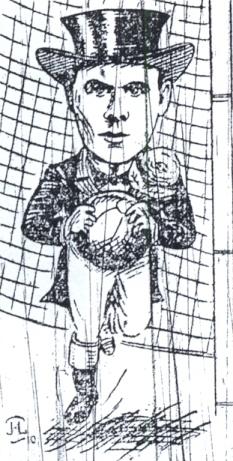 "Safe and Steady Sam" was one of the outstanding English goalkeepers of his time. He made 21 England appearances between 1907 and 1920, at a time when England usually played only three games a season and the nation went to war for four years. Any keeper enjoying a fourteen-year spell as his country's first-choice at the end of the twentieth century would have earned around 140 caps, knocking Peter Shilton's record easily of its perch. Hardy won his last and 21st international cap for England against Scotland on 10th April 1920. England won the game 5-4. 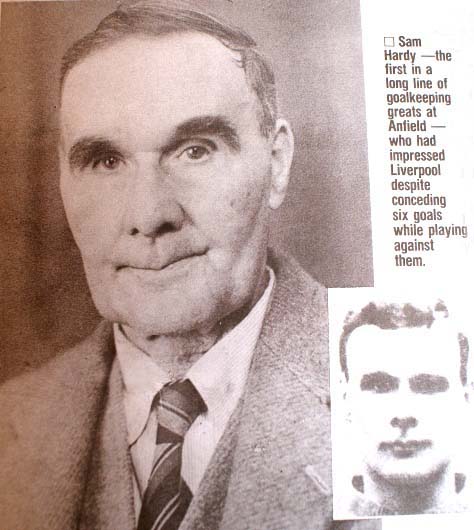 "I liked Ray Clemence but he wasn’t as good a goalkeeper as Sam Hardy."
Bob Evans, a Liverpool fan of 76 years in the 1983 Liverpool annual

Sam Hardy was a man of strong principles and was aware of the good that a man of his profile could do towards improving the lot of his fellow professionals; accordingly, he became a prominent member of the P.F.A. Sam also was a hotelier in Chesterfield and ran his own billiard hall in Alfreton in Derbyshire. Sam died in Chesterfield on 24th October 1966.

Copyright - LFChistory.net - Special thanks to historian Stuart Basson for allowing us to use his research into Sam Hardy's life and times before and after Liverpool.