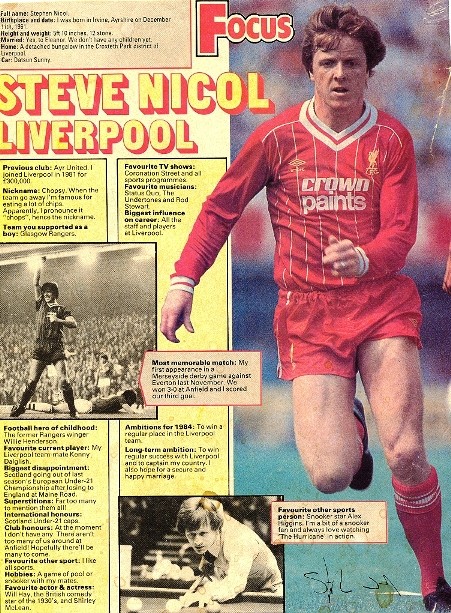 Full name: Stephen Nicol
Birthplace: I was born in Irvine, Ayrshire on December 11th 1961
Birthdate: 20th February 1951
Height and weight: 5 ft 10¾in. 12 stone
Car: Datsun Sunny
Nickname: Chopsy. When the team go away I’m famous for eating a lot of chips. Apparently I pronounce it chops hence the nickname
Team you supported as a boy: Glasgow Rangers
Football hero of childhood: The former Rangers winger Willie Henderson
Favourite current player: My Liverpool team-mate Kenny Dalglish
Biggest disappointment: Scotland going out of last season’s European u-21 championship after losing to England at Maine Road
Superstitions: Far too many to mention them all!
International honours: Scotland u-21 caps
Club honours: At the moment I don’t have any. There aren’t too many of us at Anfield! Hopefully there’ll be many to come
Favourite other sports: I like all sports
Hobbies: A game of pool or snooker with my mates
Favourite actor and actress: Will Hay the British comedy star of the 1930’s and Shirley McLaine
Favourite TV shows: Coronation Street and all Sports programmes
Favourite musicians: Status Quo, the Underworld and Rod Stewart
Biggest influence on career: All the staff and players and Liverpool
Most memorable match: My first appearance in a Merseyside derby against Everton last November. We won 3-0 at Anfield and I scored our third goal
Favourite other sports person: Snooker star Alex Higgins. I’m a bit of a snooker fan and I love watching the Hurricane in action
Ambitions for 1984: To win a regular place in the Liverpool team
Long-term ambition: To have regular success with Liverpool and to captain my country. I also hope for a secure and happy marriage