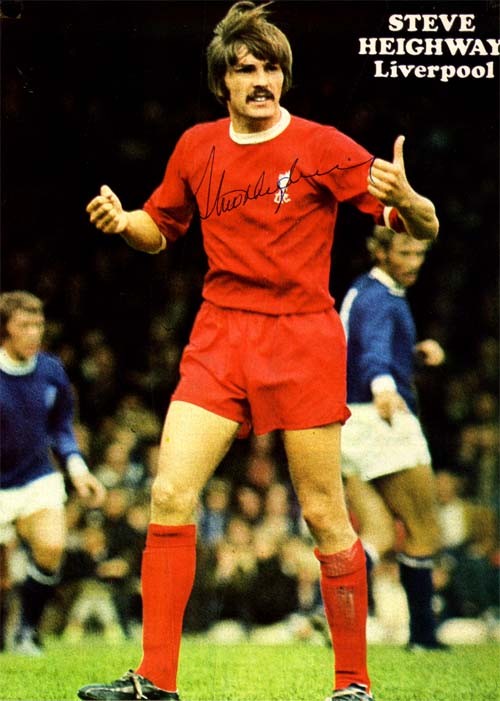 It was appropriate that Thompson should have laid on Heighway’s goal in that final because it was Steve Heighway who became the third leg of the quartet of left wingers who have lit up Anfield since the war.

Heighway was unfortunate in one respect in that his ability wasn’t really appreciated by most of the fans until after he had finished playing. It is often said that you don’t appreciate something until you haven’ got it and that applied to Heighway in many ways.

The first time that most of us heard of Steve Heighway was his surprise appearance in the Liverpool side for Gerry Byrne’s testimonial game against an All-Star XI in April 1970. On the day of the match the weather was appalling. It was raining at 7 o’clock in the morning and it never stopped all day. I had already bought my ticket for the match but had to visit Anfield on the morning of the game to get a ticket for a mate. Gerry was in the car park and I took the opportunity to wish him all the best for his testimonial. He was absolutely distraught and was convinced that nobody would turn up because of the weather.

He needn’t have worried. Red fans don’t forget their heroes and there wasn’t a bigger hero at Anfield in those days after Gerry’s epic performance in the unforgettable FA Cup Final victory over Leeds at Wembley in 1965. Only 3 minutes into that game Gerry’s collar bone was broken in a disgraceful challenge by Leeds’ inside forward Bobby Collins. Bob Paisley diagnosed the break immediately but there were no substitutes in those days. Gerry wasn’t known as ‘Cruncher’ for nothing and he wouldn’t even consider coming off. Other than Paisley and Byrne himself no-one in the ground, least of all the Leeds players, knew of the extent of the injury. Gerry went on to play a blinder and, as it turned out, not for another 87 minutes but 30 minutes extra time as well! His performance must rank as one of the bravest ever by a Liverpool player (or a player of any other club, come to that).

The outcome was that over 41000 turned up to pay homage at his testimonial match, a meaningless affair that ended with a scoreline of 8-8. A strange name appeared on the Liverpool teamsheet when the sides were announced. At outside left would appear not P. Thompson but S. Heighway.

My seat was near the front of the Kemlyn Road Stand (now the Lower Centenary Stand) towards the Kop end so I was ideally placed to get a close up of our new man. The full back who was marking him was Jimmy Armfield who, although well past his best, was still a formidable opponent. The young Heighway ran him ragged and put over a succession of centres and other passes that had our forwards queuing up to convert them.

It subsequently turned out that he wasn’t even on the club’s books at the time but Shankly wasted no time in tying him to a contract and, after making his full debut early the following season he was never left out when fit.

He was an unorthodox winger with a distinctive high stepping run and he was a wonderful sight in full flow. If there was a flaw in his game it was that he didn’t score as many goals as his ability warranted (echoes of Peter Thompson). What made his goal shortage even more ironic was the fact that for most of his career he wore the number 9 shirt. In not far short of 500 games he only scored 76 goals but at least 3 of them were memorable ones.

One of his earliest games was an unforgettable derby match at Anfield. The reds were 2-0 down with little more than 20 minutes remaining when Heighway took a pass (close to where I had watched him in Gerry’s testimonial) and weaved his way down the wing before cutting in and thumping the ball into the net from the tightest of angles. Shortly afterwards he laid on John Toshack’s first Liverpool goal and with only minutes remaining Chris Lawler scored the winner. Wonderful!!

The second memorable one was almost a replay of the one against Everton but unfortunately there wasn’t a similar happy ending. The 1971 Cup Final against Arsenal was deadlocked at 0-0 after 90 minutes but early in extra time Heighway once again cut in, having received the ball from substitute Peter Thompson and slipped the ball between the near post and the despairing grope of Bob Wilson. Unfortunately, as mentioned earlier, Arsenal were to come back and score two goals to send us all home with our tails between our legs.

His third memorable goal was at the same ground and into the same net as we ‘undressed’ Newcastle (to use David Coleman’s unforgettable phrase) in the 1974 FA Cup Final. We totally dominated one of the most one-sided Cup Finals in living memory and Heighway’s goal, added to Kevin Keegan’s two, was not a true reflection of our domination.

No matter how many or how few goals he scored Heighway will for ever be remembered for his part in what is still considered by many (including me) to be the best team goal ever scored at Anfield. In September 1978 Liverpool were playing as well as they had ever done. Earlier in the year they had retained the European Cup at Wembley and they had started the new season with three straight wins.

Spurs arrived at Anfield on a glorious late summer day with two members of the recently crowned World champions, Argentina, in their ranks. They didn’t know what had hit them. In one of Liverpool’s best ever performances Spurs were annihilated 7-0 and the best was reserved for the last.

Spurs won a rare corner which was collected by Ray Clemence who threw the ball to Ray Kennedy on the edge of the penalty area. Kennedy knocked it casually to Dalglish who helped it on to David Johnson who was on the half way line. While this was going on Heighway was charging up the left wing and Terry McDermott was sprinting from inside his own penalty area. Johnson put the ball beautifully into Heighway’s stride and he clipped it over without breaking stride to where McDermott met it with a bullet header. Football at its very best.

Terry Mac rightly got the credit for the execution of the final header but every other player in the move deserves his own mention and Heighway’s cross was absolutely sublime.

Heighway made many more contributions to Liverpool’s dominance of English and European football in the seventies but he always reckoned that he could have gone on for another two or three years but for the arrival of Kenny Dalglish! The trouble was that Kenny was such a brilliant playmaker and Heighway was such a brilliant winger that, more often than not, when Kenny looked for an outlet for the ball the first player he looked for was Heighway and the pass would invariably be inch perfect. So Heighway spent so much energy sprinting down the left wing to pick up the endless stream of passes from Dalglish that he eventually just ran out of steam.

He made his last league appearance in a 1-0 defeat to Arsenal at Highbury on 28th March 1981 and his last first team game was as a substitute in the first leg of the 1981 European Cup semi final first leg against Bayern Munich.