An inspirational leader at Liverpool 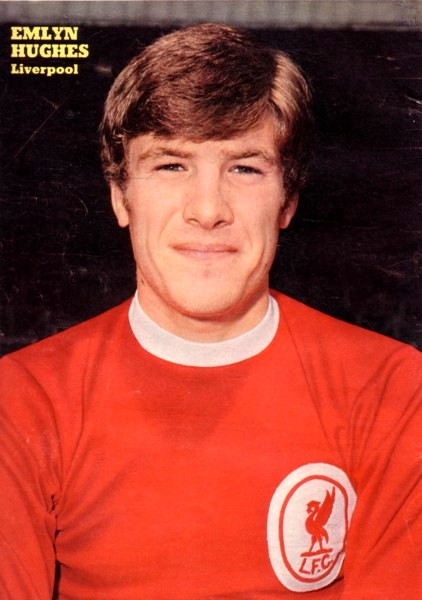 They called him Crazy Horse on The Kop. But that was one of the more complimentary nicknames that Emlyn Hughes won for himself during his time at Anfield. I’m not giving away any great secrets of the Boot Room when I say he wasn’t – and still isn’t the most popular former player to have left Liverpool. Some of his team-mates weren’t that fond of him and one of them, Tommy Smith, absolutely hated him. Smithy and Hughes never spoke to each other.

I had to speak to them both when all the trouble was brewing up but it never mattered to me if players got on like a house on fire or if they couldn’t stand the sight of each other, as long as they didn’t let their personal feelings spill over onto the pitch. In fairness, neither of them did let their personal problems affect their games when they vere playing for each other and, at the time, their dislike of each other was something we managed to keep within the dressing room.

I certainly don’t think the fans who were watching them play alongside each other had any idea of the feud that was going on. And Emlyn never, ever let his feelings overshadow his respect for his team-mates’ playing abilities, and his inspirational quality as his predecessor as club captain. Even in his own autobiography Emlyn paid a glowing tribute to Tommy, writing: “He is the greatest captain I have ever played under. Although I never particularly got along with him as a man, I had nothing but admiration and respect for him as a captain on the pitch. He had powerful qualities of leadership.”

I can assure you, that is the biggest compliment that Tommy Smith will ever hear from the most unexpected source. Emlyn always struck me as a player who could have been an even better one if he had been a slightly different personality. He always liked to be King of the Roost. He wanted to be a charge hand.

Shank signed him when he was still in his teens. But he was already an established first teamer with Blackpool and, in those days, they were in the First Division. Shank had been looking to find someone to replace Willie Stevenson at left half and when Ron Suart was sacked as the Blackpool manager that was the time to make a move.

Ron had virtually promised us first refusal on Emlyn and once he had gone we knew we would have to go in if we wanted to make sure he joined us. One funny incident happened on the day that the deal went through as Shank decided to drive Emlyn back to Merseyside and had an accident on the way home. The rear light of Shank’s Ford Capri was smashed and he was later stopped by the police in Preston for driving without a rear light.

Emlyn tells the story of how, when stopped, Shank turned round to the officer and asked him: ‘Don’t you know who is in this car’. When the policeman said no, Shank told him: ‘There sits the future captain of England’, as he pointed to Emlyn. I’m not sure if it is true or not but it would be a typical Shank reaction and, equally, one that Emlyn would love to relate!

Emlyn was always very open about how he felt, very much the way he was when he appeared every week on Question of Sport. He wouldn’t hide his feelings and you only had look at his face to know what sort of day he had been having. He wouldn’t let anything nestle and would always be talking on and off the field. That helped to make him a good captain which is something he always wanted to be and didn’t mind who knew it. As captain he was always very selfish and was single-minded about anything, as long as he got it. He certainly wasn’t bothered about anyone else!

But alongside all this, he was a useful player and you couldn’t say anything else. That was a verdict shared by three separate England managers, all of whom used Emlyn as captain at one time or another. The late Joe Mercer, in his short spell in charge of the national team, made Emlyn his skipper and he also led out the side under the reign of Don Revie and Ron Greenwood.

Since leaving Liverpool, at a time when he thought he should have still been in the first team, he had a successful spell with Wolverhampton Wanderers, taking them to a League Cup Final victory at Wembley, an unsuccessful time as manager at Rotherham United and now he’s built up a name and reputation as a television and newspaper personality. It wasn’t that surprising that he had a hard time in management. Sometimes it is a lonely job, and Emlyn always gives the impression that he is happiest when he has an audience. He loves the limelight, he laps up the praise and enjoys being a personality with all the trappings that brings.

But don’t ever underestimate his worth to Liverpool as a player, as a wing-half, as a full back and as a central defender. His father Fred had played Rugby League for Barrow Schools in the 13-a-side code but always showed more talent at soccer. Barrow gave him trials when he was only 15 but decided he was too small and it was only as a favour to his father that Ron Suart gave him a second chance with Blackpool, although at first they weren’t too impressed. Even then he was on the small side but after 18 months of steaks and youth games he was taken on as an £8 a week professional. He had set off on the long road that, eventually, was to lead to him captaining Liverpool in an European Cup Final and leading his national team onto the pitch at Wembley!