Bob Paisley was a big fan of little Sammy Lee 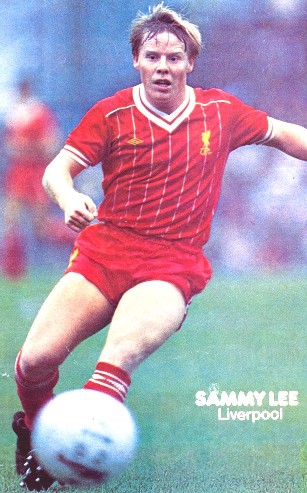 To look at him you would never picture Sammy Lee as an international footballer. He certainly doesn't have the traditional slim build, but don't let that fool you! Little Sammy was some player!

And if they had put that heart of his into Big Ben they would never have to carry out any maintenance. He could run, run and run. And he was another of the hard workers who seemed to thrive the tougher it got. He was a true Scouser, having been brought up in the Bull Ring, but it was only when he failed seven O levels that he decided he wanted to become a footballer.

Until then Sammy had dreams of being a surveyor or a physicist but he was denied the chance of going to University when he only passed English Language and English Literature exams while at St Francis Xavier College in Woolton, not too far away from where I was living. Sammy recalled: "I was so ashamed that I did not go back to the school to pick up my certificate. I wanted to stay on at school and had even taken up physics at night school. I felt I was good enough at football to be offered a chance at 16 then I would still be good enough at 18 when clubs have to decide if they will offer you an apprenticeship or let you go."

As a schoolboy Sammy was training with us one night a week under Tom Saunders who offered him an apprenticeship, but with the warning he used to give to any youngster about how hard and exacting it would be if he hoped to make the grade. For most of his time at the club he was the smallest player on the staff - he was certainly the smallest I can remember making it as a first team regular - at a fraction under five foot five but he made up for any lack of height with his bulk and effort.

Even when he was 17, I was sure he was going to make it and as a youngster he reminded me a lot of Ian Callaghan. He had the same appetite and thirst for the game. The biggest difference was that Cally was fairly quiet and mild mannered whereas Sammy had a bubbly personality and was never, ever lost for a word.

I still don't know how Sammy failed all those exams because he was such a hard worker on the training pitch. I had no hesitation in naming him as substitute only a couple of weeks after his 18th birthday and I wouldn't have overworried if I had been forced to pitch him into the game in front of The Kop. He had to wait another year before his first experience of playing in the First Division but people at the club had already earmarked him as the new Ian Callaghan.

It was Jimmy Case who had to make way for him towards the end of the 1979-80 season and Sammy was eager to take his belated chance, having been on the verge of the team for a couple of seasons. He slotted in straight away in that wide right position and became an automatic choice the following season, going on to captain the England Under-21s and to win a couple of dozen full caps. He was perpetual motion plus total dedication and he didn't scream or moan when he fell out of favour and accepted a role as a squad member until Steve McMahon's arrival convinced him his future lay elsewhere.