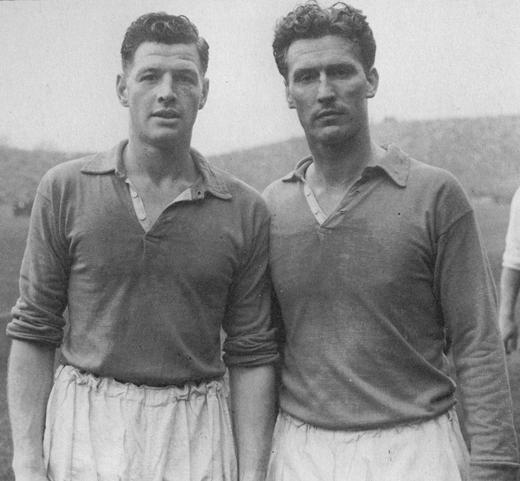 Eddie Spicer (on the left) with his team-mate Willie Fagan in the 1948-49 season.

The footballing career of Ted Spicer ended the day that Liverpool signed a new goalkeeper. That was the tragic and painful truth and the real reason that Eddie (as he was known to fans) never played after a fateful match against Manchester United on Saturday, December 19, 1953. At the time Ted had only just turned 31 and, in those days, that wasn't too old for a full back.

We could never decide on our best goalkeeper. We'd been shipping goals, had only won five matches, and were heading for the second division. Manager Don Welsh decided it was time to do something about it.

A few days before our trip to Old Trafford, Mr Welsh signed Geoff Twentyman for £10,000 from Carlisle United and Dave Underwood for £7,000 from Watford. With the transfer being completed too late for him [Underwood] to travel up to Liverpool for training, the first time any of us, including Ted, met him was when we arrived at Manchester's Midland hotel before the match.

That was to be tragically unfortunate for Ted. Let him take up the story.

"We didn't know anything about him [Underwood] and after about 20 minutes I can remember Roger Byrne, who was outside left that day, going down the wing. I went with Tommy Taylor. Roger hit this ball, hard and low across the penalty box and I went for the ball expecting our goalkeeper to come out and drop on it. That's what our other goalkeepers would have done and that's what I thought Underwood would do. Instead he just took a woof at it with his boot, missed the ball and hit me. He was very upset about it afterwards and blamed himself for it."

That mighty blow shattered Ted's left leg. It disengrated just the way a piece of dead wood does if you tread on it. In all he had 19 fractures and he was in and out of hospital for the next 12 months having it set and reset and it took more than 12 months to get over it and to start to walk again. Ted never played another football match after that and was finally released but given a testimonial at Anfield.